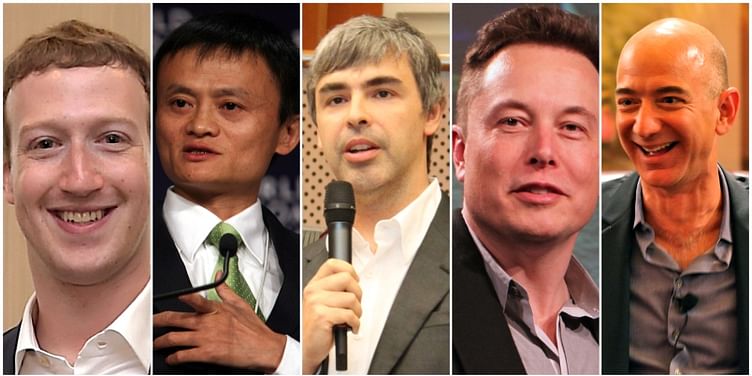 There is no dearth of inspiring business personalities in today’s startup landscape. However, few realise that all those who have made it big in the last ten years or so, during the so-called 'startup revolution', received their own dose of inspiration from business leaders who changed the way people looked at entrepreneurship in an older era. They taught the present generation to pursue their dreams in the most innovative way and create something larger than life, something that would last even after they're gone. Here are five such personalities who made it big before the startup revolution took place-

Mark Elliot Zuckerberg wanted to create an online directory for college students, where they could create profiles, share photos and keep in touch with their friends. After months of hard work and perseverance, he launched 'Thefacebook' (later renamed Facebook) on February 4, 2004. It's because of this dream project that Mark Zuckerberg had to drop out of Harvard University after his sophomore year and move to Silicon Valley.

Today, after almost 13 years, Facebook is the largest social media platform in the world, and Mark Zuckerberg, its fifth richest individual (net worth $55.3 billion).

If there's one rags-to-riches story that can inspire any budding entrepreneur, it's Jack Ma's. Coming from a lower middle class family, Jack Ma was rejected from almost every job that he applied for. During a trip to the US in 1995, he searched for 'beer' on the internet, but couldn't find any Chinese company in the search results. It was then that Ma decided to do something related to internet-based search in China. After returning from the United States, he came up with a couple of ventures, but failed miserably. However, he didn't give up on his dream and created a marketplace called 'Alibaba' in 1999 that allowed exporters to list their products online and customers to buy them directly.

17 years on, Alibaba is one of the largest e-commerce websites in the world, and Jack Ma is the richest man in China, with a total net worth of more than $26 billion.

Before starting multiple million-dollar businesses and becoming a billionaire, the only two assets that Elon Musk banked on were his brain and the vision to change the world. Not only has he tried his hand at different industries, but he has also revolutionised each of them in his unique style. Right from e-cash (PayPal, 1998) and rocket technology (SpaceX, 2002) to electric cars (Tesla Motors, 2003) and energy services (SolarCity, 2006), he has done it all.

We can never thank Larry Page enough, for he is the one who co-founded Google Inc. in 1998 and gave us the best teacher in the world. Larry Page earned his Ph.D. in Computer Science from Stanford University and wrote a research paper titled 'The Anatomy of a Large-Scale Hypertextual Web Search Engine’, which was one of the highest downloaded science documents in history at the time.

Today, Larry Page is the 12th richest man alive, with a total net worth of $37.8 billion, and serves as the CEO of Alphabet Inc., the parent company of Google and dozens of other businesses operating in different fields.

Jeff Bezos, better known as the founder of Amazon.com, is one of the most admired tech entrepreneurs, investors and philanthropists in the world. What he initially started as an online merchant of books and many other products in 1994 has now transformed into the largest online retailer in the world. This video speaks volumes about the plans of Jeff Bezos and Amazon - ambition and excitement are really the only words that fit.

With a net worth of $65.6 billion, Jeff Bezos is one of the top three wealthiest people in the world.

These five entrepreneurs didn't get to enjoy the startup-friendly conditions prevalent today. And yet, they took their ventures to all new heights, transforming them into multi-billion dollar, cutting-edge businesses. More importantly, they made an entire generation believe that if one works hard, with sheer determination and a zeal for perfection, success is well within reach.

Who is it that inspires you to follow your entrepreneurial dreams? Tell us in the comments section below.