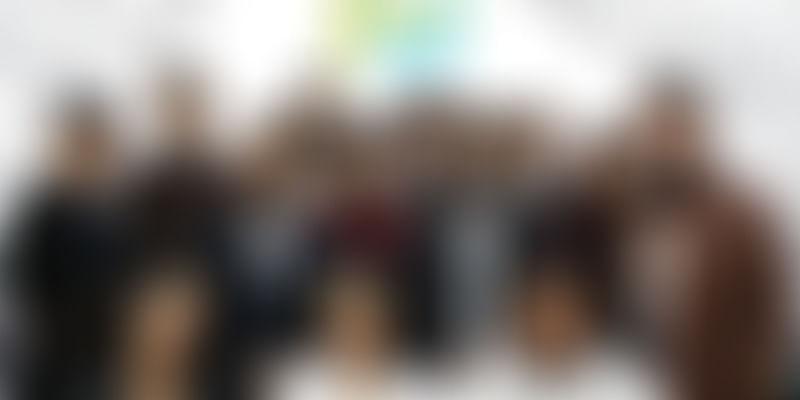 Rishabh Tickoo, Mannat Wadehra, Shitiz Dogra and Saikat Bagchi were four childhood friends who were separated by the pursuit of education and employment across different geographies.

The four of them kept in touch, and eventually discovered that they shared a common problem - an unhealthy lifestyle owing to the unawareness of what to eat and when to eat it. An attempt to solve this problem at a mass level brought them together as co-founders of First Eat, a venture they started in November 2015.

In pursuit of good health

Gurugram-based First Eat not only serves nutritious meals, but also educates people of all walks of life about the importance of nutrition through a network of dieticians.

Keeping in mind that each body is different and cannot be fitted with general dietary recommendations, First Eat allows users to seek the answer to the question ‘What kind of food do I need?’ through a questionnaire form designed by a team of doctors and nutritionists available on the website.

The users can use the telephonic consultation facility for any further queries. First Eat provides goal-oriented diet plans for gym goers, weight loss aspirants and for those suffering from non-communicable diseases. Further, to spread awareness, it conducts wellness programmes in corporate offices, homemaker groups in residential societies, and small closed groups. These programmes consist of a three pronged approach of education, consulting and trials of diet and fitness sciences (all conducted by professionals).

First Eat also provides individual healthy meals, with information (including calorie count, proteins, carbs and fats), which are available all day on the mobile app and website for ordering.

Initially bootstrapped, First Eat, in February this year, raised a seed capital of $200,000 from an F&B entrepreneur in Gurugram. The seed capital has been utilised to scale up the operation in order to serve the entire city and upgrade the tech product.

“The first and biggest challenge was the formation of a team with the amount of motivation a startup needs. The second challenge was to build a product that could potentially benefit and change everyone’s life,” says 29-year-old Shitiz.

Shitiz did his BE at Netaji Subhas Institute of Technology (NSIT) and PGDM from MICA and he looks after the marketing and communications at First Eat. Mannat (30) is a B.Tech from Punjabi University and PGPM from Great Lakes Institute of Management, Chennai and he of all the alliances and strategic partnerships at FirstEat. While Rishabh (29) is also a PGDM from MICA and at First Eat, Rishabh looks after the operations. Saikat Bagchi (30) did his BE at Delhi College of Engineering and PGDM from MICA. He takes care of the product and the business strategy.

“All the plans are carefully curated by the Nutrition Panel at First Eat, and the standardisation is used by the chefs in the kitchens to produce finished products,” says Shitiz.

The cost of producing finished goods takes 30-35 percent of the total revenue, with the rest being the startup’s operating margin which is utilized for human capital, marketing, administrative and training expenses. Shitiz claims that First Eat has a positive unit economics, while the efficiency built into the supply chain system helps to reduce wastage and cost.

First Eat owns three kitchens in Gurugram. Dietitians and the Head Chef on the Nutrition Panel curate the recipes based on required nutrition, with measured ingredients and calorie count for every plan. Personalised Diet Plans for NCDs are curated by the panel based on the consumer’s inputs about health and medical state after a personalised telephonic consultation with a dietitian. The diet plans are prepared by the chef’s team (which is around 15 in strength, including the helping force) in the kitchen using the mentioned ingredients and best practices. The end product is then delivered at the user’s doorstep.

The First Eat app has witnessed 15,000 downloads so far. The three kitchens across Gurugram serve around 9,000 meals every month (including 52 Subscriptions for the Disease Preventive and Goal-Oriented diet plans). The average ticket size of on-demand calorie counted meals ranges between Rs 100 and Rs 140, and the average ticket size for diet plans ranges from Rs 12,000 to Rs 15,000.

All together, First Eat has a team of 35 members, including technology, sales and marketing, operations, the First Eat Nutrition Panel (consulting team), which consists of dietitians, doctors and life coaches, and the fulfillment team, which consists of the Chef’s Team and support staff. Currently the startup has four dietitians, two life coaches and two doctors in the entire panel.

Though the foodtech industry last year gained a lot of attention in terms of VC funding and emerging players, it faded away to an extent this year, with a few ventures shutting shop despite having investor money. TinyOwl, which raised $7.5 million from Sequoia Capital and Matrix Partners in October 2015, got acquired by roadrunnr in June this year. Dazo, which raised funds from Google’s Rajan Anandan and Amazon's Amit Agarwal in April 2015, shut down in October the same year.

However, a few managed to survive the turmoil. In September 2016, Swiggy raised $15 million from BVP, taking its total funds raised to $75.5 million. In October 2016, Gurgaon-based InnerChef raised $2.5 million in a Series A funding round led by Mistletoe, M&S Fund Singapore and existing investors. Zomato, the most heavily funded player in this space, has also expanded internationally.

The report also stated that the organised food business in India is worth $48 billion, of which food delivery is valued at $15 billion.

"First Eat has a positive unit economics. The provision of monthly/fortnightly subscription and diet plans enable bringing in the predictability factor for inventory control. First Eat has a special in-house analytics team that harnesses data sciences and analytical tools to ensure efficient inventory optimisation and wastage reduction. These techniques have helped us control inventory costs and thereby minimise wastage by almost 15 percent per month," says Shitiz.

First Eat aims to reach out to over million users across five metros (Delhi, Mumbai, Bengaluru, Chennai and Pune) over the next three years. The expansion plan will kick off with tapping the NCR region in the first quarter of FY 17-18 and then moving on to other metro cities in subsequent quarters.