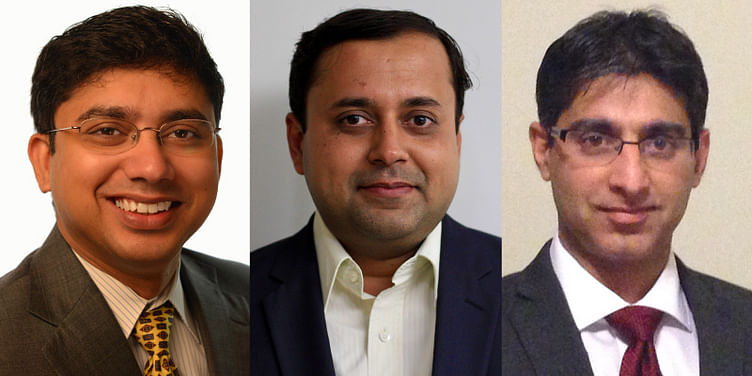 With revenues of $3.6 million upwards and a 150-member team, Tredence founders are feasting on MuSigma's pie through innovating strategies.

It was 2010 when Shub Bhowmick, after a seven-month stint, chose to move on from one of India’s biggest data analytics companies, Mu Sigma. His reason? Although he saw a huge opportunity in the sector, he didn’t necessarily see himself as a right fit for the organisation.

But this Kellogg School of Management alumnus was excited by the $112-billion market opportunity that lay before him. And this marked the quest for building a data analytics company with a difference.

Still working for another firm, Shub was looking for co-founders. In October 2012, Shub reconnected with Sumit Mehra, his IIT-BHU batchmate, over dinner. Sumit had spent 16 years in data and intelligence while graduating from Wharton Business School. It didn't take too long to convince Sumit, who was already working in the sector and was excited by a startup in the field. Thus, Tredence had two founders.

While Shub had experience in advanced analytics, Sumit braved the business intelligence bit, two of the crucial cogs to build an insight worthy data analytics firm.

But the team needed someone who had hands-on experience in analytics. Incidentally, Shashank Dubey, Shub's colleague at Mu Sigma pinged around the same time, things clicked and thus joined Tredence, as one of the co-founders.

Today Shub, as the CEO, looks after strategy and consulting, Sumit, as the CTO, looks after the technology, business intelligence, and data problem-solving aspects, while Shashank is Head of Analytics.

Starting up in December 2012, this dream team rolled in their first major client by February 2013. But the company got formally incorporated only in 2014.

Mapping the customer decision journey, the firm adds a layer of analytics on the clients' strategies, helping them drive superior growth for their organisations.

The firm used the revenues from their first deal in February 2013 to fund their growth and survival. Then they started looking into their alumni network (of Wharton, Kellogg, and IIT) for new clients. But despite having a cumulative experience of over 52 years, the founders didn’t have it easy.

Though speaking to almost 5-6 alumni a day, nothing was converting for Tredence in the initial days.

There wasn’t a brand recognition, nor was the proposition clear to the clients, they approached. Their schooling pedigrees didn’t stand valid either.

But things stabilised after the company saw their second cheque of $250,000 in March 2014, almost a year after they recieved their first cheque.

In a startup, time is key. Although the founders weren’t taking any salary, the company still had employees who needed to be paid. Hence, acquiring paying clients as soon as possible was key to the survival of the business.

From there, today the firm maps their growth on three business metrics of – Quality People, Revenues, and Customers.

In the first year of operation, the company had an employee base of six individuals. Witnessing steady growth, by the third year (2015), the company was as big as 75 employees. Today, Tredence is a 150-people strong.

As far as revenues are concerned, Tredence ended the first year of operations with $700,000. At the end of FY2014-15, the firm was already raking in $3.6 million in revenues and claims to have grown by 10x since the year of inception.

The cumulative growth of the company has landed them at a rank #385 in Inc.’s annual ranking of the fastest-growing private companies in the US.

While not giving the exact number, Sumit claims that the firm is doubling its revenues every year.

Shub says that Tredence today works with clients from across the world: one of the largest retailers, two large pharmacy chains, a hotel chain, and a telecom giant. Last financial year, the firm turned around with 14 customers, with close to four Fortune 10 companies and most of them being Fortune 500 companies. He says,

“But now we are starting to mine these accounts further and are creating new needs for these clients, taking wallet share away from some of the other competitors in the market.”

The company has clientele across five locations, including UK, Canada, Australia, India, and the US, which holds 90 percent of the firm's customer base. While Bengaluru acts a major delivery cycle for the company, the company has its headquarters in San Jose, California.

While asking them about the churn rate, the founders confidently say that there have been only two-three customers which left the firm, during their journey.

The company is now looking to expand its sales strategy from just looking at alumni networks to focussing on channel strategies of co-building solutions as well as looking beyond the existing networks.

It hopes to double its revenues, people strength, and clientele base by the end of next financial year.

But with various strategy consulting and analytics firms in the market, where does Tredence find its differentiator? Shashank explains,

Math is getting commoditised. We are in the business of simplifying this mathematics, by doing consulting, strategy, and putting a consulting hat. But with major firms being in the strategy space, most of them have been unsuccessful in building the bridge between strategy and analytics, which comes after that. And that’s our differentiator, with simplification being at the core.

The second differentiator is the ability to scale the solutions. In their past, Tredence has scaled solutions for companies across geographies of 20 cities and three continents.

The firm also doesn’t shy away from plugging already scaled analytics solutions and deploying them with newer clients from different domains, while customising to the problem statement.

In a traditional setup, a consulting firm explains to the client how major business operations can be made efficient by tackling problems areas. An analytics firm, on the other hand, works on the premise that only the problem needs to be solved. This takes the count to two companies.

And, now when this technology solution needs to be scaled, there is a technology handover to a third company that is added to the loop. The process, therefore, becomes slow and inefficient, not to mention costly.

Tredence believes in taking on the entire cycle under its wing, keeping the solution intact, efficient and easy to deploy.

A quick search on Mu Sigma and Tredence gives you Quora links that debate where fresh talent in the industry should join, or how are the two firms different in their strategies.

But, for a bootstrapped startup like Tredence, is it even viable to believe that it’s giving competition to India’s analytics giant Mu Sigma?

We believe that we have been a good competitor to Mu Sigma and have eaten some of their pie in the market by showcasing higher quality.

Sumit, however, believes the two firms cannot be easily compared. He believes Tredence's smaller size makes it faster and far more nimble. Also, Mu Sigma is a pure-play analytics company with a philosophy to solve the same problem again and again with different customers. Tredence looks at the market differently, while looking at increasing practices and knowledge in the market.

We build solutions for clients and host it on our cloud. So it’s not about billing clients, but rather keeping their data through hosting it on our cloud and continuing innovation by adding more value (and solutions) for the client based on the data.

The third big strategy differentiator is that Tredence’s solutions don’t necessarily require further employees to sustain, being as they can function without human intervention after the building phase.

There’s really no stopping newer practices like Tredence to stake a claim of the opportunities in the $100-billion market since data is all pervasive.