Ayurveda for 21st century: How Arjun Vaidya is repackaging it to win over new-age customers 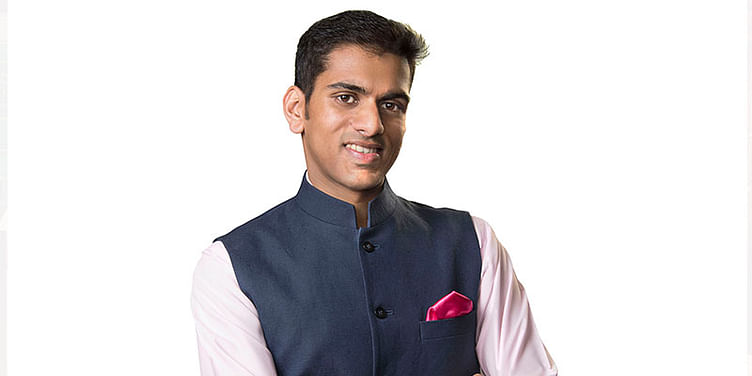 Despite dating back all the way to 5000 BC, Ayurveda has been kept alive in India. From rishis and munis passing on their knowledge to families handing over this tradition to future generations, Ayurveda has found its way over to the present day.

Drawing on the 150 years of knowledge of Ayurveda passed down through six generations, 25-year-old Arjun Vaidya, CEO of Dr Vaidya’s, is carrying the family tradition forward. Arjun’s primary focus is on his family’s legacy and repackaging it in a way that makes it appealing to modern consumers, who ordinarily wouldn’t use a lep (liniment) or a dant manjan (tooth powder).

“At Dr Vaidya’s, our brand vision is focused on Ayurveda for the 21st century. Our view is to take these traditional Indian formulations and rebrand them in a form that makes them cool, sexy, fun and aspirational for modern consumers,” says Arjun.

Arjun’s grandfather, Dr Natoobhai Vaidya, was a legendary Ayurvedic doctor who for decades used his knowledge to cure people. In its prime, recalls Arjun, when his great-grandfather and grandfather used to see patients, the clinic attracted more than 250 patients per day and had more than 12,000 patients who would write in via post. Keeping with the technological growth and development, they have moved the postal business online through their own website as well as other marketplaces including Amazon, Paytm, ShopClues, eBay, and Snapdeal.

Though Arjun’s grandfather passed away in 2013, the clinic he started in Mumbai is still up and running, with 60-70 patients visiting it every day. Arjun says, “Even though we plan to do new things, we will continue with the clinic. That is our legacy.”

As a brand, Dr Vaidya’s owns 96 FDA-approved formulations for Ayurvedic proprietary medicine, all produced in-house in their factory in Silvassa and available at the clinic.

As a 14-year-old, Arjun spent most of his weekends with his grandfather, poring over ancient Sanskrit texts filled with formulations and knowledge about Ayurveda.

Arjun had planned to pursue biotech and biochem but instead went to a liberal arts college and studied economics and politics. He worked with Barkha Dutt for a few months upon his return from Brown University, after which his fascination for entrepreneurship led him to join L Capital Asia, a venture capital and private equity firm, in 2013. It was while working with other companies that he looked back at his own heritage and, as he says, “Life came full circle for me and I decided to take Dr Vaidya’s to new-age customers.” He took over the reins in early 2016.

Since 2014, with a new government at the Centre, there has been a renewed interest in Ayurveda and Arjun says that has helped things. However, the industry still has miles to go because of the lack of Ayurvedic hospitals, clinics, and doctors vis-a-vis the popularity and reach of Western medicine.

Look at yoga today — the West has completely rebranded this ancient Indian creation. With yoga pants, yoga gyms, and yoga mats, today yoga is considered cool. It is something you can relate to and that is the reason it is now a $36 billion industry in the US. This is what we need to do with Ayurveda — take our traditional Indian knowledge (which has been tried and tested for more than 2,500 years) and package it in a form that appeals to the modern consumer.

The country’s Ayurvedic products market is projected to register a CAGR of 16 percent during 2016-2021, according to a recently released TechSci Research report. With this in mind, Arjun has kept the focus on

the youth, who he feels have lost touch with Ayurveda. To drive this, the focus is to build new-age over-the-counter (OTP) products. They have launched two innovative products through the OTP channel in Mumbai — HERBofit and LIVitup. Arjun says, “Modern consumers enjoy having a good time, but still need to be productive the next day. LIVitup does that. It is an Ayurvedic hangover shield that doubles up as a long-term liver protector.”

HERBofit provides the goodness of Chyawanprash. According to him, the market for this supplement is Rs 900 crore while multivitamins is more than Rs 1,200 crore and if dietary supplements are included, the market it is larger than Rs 12,000 crore. His 280mg capsule is a multivitamin version of this formulation.

There is competition in the market such as Himalaya’s Party Smart. Arjun says, “While established players are selling liver protection products and Chyawanprash, our approach to branding, packaging, marketing, and speaking to the consumer is very different. Also, all our products are proprietary family formulations and thus it becomes very difficult to replicate exactly what we make.”

From Mumbai to pan-India

Currently, their range is available online and through mom and pop stores in Mumbai. They have tied up with the 40 best bars in Mumbai to first sample and then retail LIVitup. Arjun claims that through their bar promotions, more than 50,000 consumers have used the product in Mumbai alone. They have also tied up with music festivals such as Sula Fest and a few others to get consumers to see the product at the right places. Going forward, they are in the process of tying up with multiple wine shops to be everywhere the consumer goes for a nightlife experience. Similarly, for HERBOfit, they have tied up with gyms, yoga and Zumba workshops, dieticians, and nutritionists.

“In the short term, we aim to expand to the outskirts of Mumbai and Pune and in the medium term are focused on building out our range through the western region of India. We have an in-house sales team and are focused on starting small but building the right infrastructure to build a long-term brand in any market.”

The repeats from online and offline space and the traction they have seen has pushed them to expand rapidly. From a team of nine people in April last year, they today have more than 40 people across production, sales, marketing, and accounts.

With established players such as Himalaya, Emami, and Dabur already in the market and Patanjali doing well for itself, how does Dr Vaidya’s differentiate itself?

With regard to the established players, Arjun says, “They have been doing what they have been doing for a very very long time and I have tremendous respect for them. In the case of Patanjali, less than 5 percent of their products come from proprietary formulations. Most of their products are FMCG products which bring in their revenue. We are using our own proprietary formulations with only in-house manufacturing.”

According to Arjun, they are at a nascent stage with a revenue run rate of Rs 10 lakh a month. The response they have received has been positive. In a short span of six months, their products are already available in China and they are in talks with partners in more than 14 countries globally to take their brand of Ayurveda to the world, says Arjun.

Since the family already has money to serve as Angel investment, Arjun is looking at raising a series A round. He is in talks with investors but it is most likely to not happen for the next six months.

Arjun’s priority is India and going pan-India in the next few years. He wants to build a strong brand presence with recall value and make Dr Vaidya’s products a household name. As someone who has benefited from Ayurveda himself, Arjun truly believes in its power. “We are a ‘proudly Indian’ brand and it is a mark we maintain in all our products. In the long run, we want to take the traditional Indian science of Ayurveda to the world.”

The Modi government’s setting up of the Ministry of AYUSH and the renewed interest in alternative medicines and products has given a boost to this industry. The Indian herbal industry is estimated at Rs 4,205 with the export of Ayurvedic medicines and herbal products worth Rs 440 crore according to the Exim Bank report. The industry has the potential to scale up to Rs 7,000 crore by 2020. With an industry that is going to grow and expand and is seeing increasing consumer awareness and government support, Arjun’s plans of reaching out to new-age consumers with Ayurvedic products in a new package and value may just work the magic.