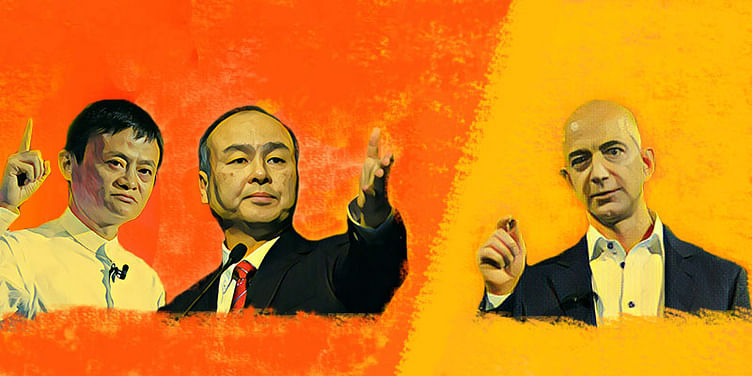 The Snapdeal Board is still figuring out a deal that will result in the company falling into Flipkart’s cart. But the acquisition is not the true story. The consequences of such a deal are far reaching.

A potential Flipkart-Snapdeal deal has set off frenzied speculations over the past few weeks. And with good reason. A deal like this, which will mean SoftBank becoming a significant minority stake holder in Flipkart, has some very delicious implications.

But before we go there, here’s the latest:

The Flipkart-Snapdeal deal isn’t done yet. But it isn’t off the table either. Talks are still on. Monday’s announcement by Flipkart of its $1.4 billion fund raise — the Indian startup ecosystem’s worst kept secret — had muddied the waters a bit. But the eBay acquisition and the Snapdeal one are unrelated, to the extent that acquiring one doesn’t mean the other won’t be bought out. In fact, the Snapdeal acquisition will follow the eBay template. And the eBay, Tencent, and Microsoft investment into Flipkart was done many months back. Flipkart was just waiting for the Snapdeal deal to happen to announce that too, but delays in negotiations led them to announce the $1.4 billion fund raise first, said people aware of the discussions. What the various media outlets have got right is that Snapdeal’s non-Softbank investors and founders are holding out for higher payouts for their stakes.

SoftBank wants to invest in Flipkart. It wants Flipkart to ‘buy’ Snapdeal so that the former can show something of its doomed investment. While Flipkart does not want Snapdeal, it desperately wants SoftBank, and the many billions of dollars it has. So it has to acquire Snapdeal on paper like it did with eBay. SoftBank needs a sign off from the board of Snapdeal. Kalaari, Nexus, and the founders — Kunal Bahl and Rohit Bansal — are the others on the board. Kalaari owns around an eight percent stake in Snapdeal, Nexus around 10 percent, and the founders around six percent, with SoftBank’s stake being over 30 percent. Kalaari had sold off some of its stakes earlier when other investors came in, as did other investors like eBay and Saama Capital. The founders too have made handsome money after selling part of their stake over the last few years. Nexus has not sold any of its stakes yet.

To sign off on the deal, Kalaari and Nexus wanted $100 million each, and the founders also wanted $100 million, though SoftBank supposedly offered them only $10 million. In between, there were concerns that investors who are not on Snapdeal’s board, like the Ontario Teacher’s Pension Plan, could create trouble if the board signs off on a deal, but it is now understood that they will go along with whatever the board decides, according to a person with direct knowledge of the discussions.

Flipkart is obviously not going to part with any cash for Snapdeal, so SoftBank will have to buy out the others on the board; it, however, does not want to pay so much for a failing venture. The deal on the table values Snapdeal at around $900 million. At this valuation, Kalaari and Nexus will get only about 50 cents for every dollar invested, according to a source with direct knowledge of the deal discussions. They want at least some profit to show their LPs. Hence the stalemate.

Now that the boring details are out of the way, let’s get down to the interesting business of dissecting this possible deal. What will be the implications of a deal where Flipkart acquires Snapdeal, at least on paper?

SoftBank will become a significant minority investor in Flipkart. Tiger Global had around a 33 percent stake in Flipkart. It has offloaded shares in the $1.4 billion round and will sell off a further part of its stake to SoftBank for around $500 million. This means that Tiger’s stake will come down to around 20 percent. SoftBank will also put around $1 billion into Flipkart. It has already spent around $900 million on Snapdeal so far. It will have to fork out more to buy out other Snapdeal investors and the founders. So, in total, SoftBank would have spent over $2.5 billion to get a 20 percent stake in Flipkart. The question is how much less it would have had to spend for the same stake if, instead of investing in Snapdeal in 2015, the Masayoshi Son-led SoftBank had invested in Flipkart.

Investing in Flipkart would mean that SoftBank will finally have a stake in what could become a winning horse. The Amazon question remains, but there is no local player that can compete against Amazon other than Flipkart.

"If they (SoftBank) are doing one consumer internet company, it has to be Flipkart. So SoftBank does not have much of a choice,” says an investor who has knowledge of the negotiations.

All persons quoted in this story spoke on the condition of anonymity due to the sensitive nature of the information they are sharing.

SoftBank has not had a good run in India. Apart from Snapdeal, it has invested in Housing and Ola. The Housing fiasco is well known, and SoftBank has had to write off some of its investment value in Ola. After Snapdeal’s journey south, SoftBank needs a big win, and only Flipkart seems to be in the position to provide one at the moment. So why pour money into a lost cause? Why not invest it all into Flipkart?

SoftBank will have to write off a large investment. At least a paper-sale will look good on their books and will help them save face. Also, they are hoping to get a good swap ratio with Flipkart, which means they will get more shares than they would get if they put in only cash,” says an e-commerce industry insider with knowledge of the discussions.

In an ideal world, Flipkart would not want to acquire Snapdeal. “But it wants Softbank, and Snapdeal is the dowry,” says a consultant who works closely with one of the parties involved in the discussions. Flipkart has got some deep-pocketed investors already in Naspers, Tiger Global, Tencent, eBay, and Microsoft. Adding SoftBank to that mix will strengthen it. The giant of Indian e-commerce needs all the money it can get to fight a resurgent Amazon.

But according to YourStory sources, Flipkart is not happy with SoftBank paying good money to other Snapdeal investors. “Flipkart is saying, ‘Put all the money you can spare into us’,” says the e-commerce industry insider quoted earlier. Flipkart has said it will run eBay as a separate entity, and that is what it will do with Snapdeal, at least for now, according to sources.

“Apart from an increased ability to fight Amazon, Flipkart will also be able to remove one competitor. This deal should have been done in 2014, but many egos were involved. If the founders had been able to find a middle ground then, everyone might have had a better outcome,” says the investor quoted earlier.

It will also be a morale booster to employees, who, according to sources within the company, are in a jubilant mood -- there was cake cutting in the office -- after the $1.4 billion fund raise announcement. Flipkart Group CEO Binny Bansal had also sent an email saying employee stock options will go up and they should not be worried about the lowered valuations, says a Flipkart employee who spoke on condition of anonymity.

For the Indian startup ecosystem

It is good news and bad for the Indian startup ecosystem. The good news is that instead of a company collapsing, it is getting acquired. Snapdeal has taken a massive battering over the past many months. (Read the YourStory article on Snapdeal snapping) At its best, Snapdeal’s GMV was at Rs 1,500 crore; it was down to Rs 300 crore a month last month, according to a person with knowledge of Snapdeal’s operations. Snapdeal has tried spinning positive stories around each of its transformations — from saying it is focusing on profitability to rebranding. But it has run out of spin with the company’s founders admitting in an email to employees that its investors are figuring out the path ahead for the company.

While employees left at the firm may be worried, sources say that the founders have made their money.

Broadly, none of the companies have really returned money to investors, barring a handful. But founders have made money. That is bad, and it will be a problem for the Indian startup ecosystem. Investors will now be wary,” says an investor.

That’s the bad news for the startup ecosystem. “Imagine going to investors and raising funds after this. Raising funds was always difficult, but now it will be worse,” says an entrepreneur.

A former entrepreneur, however, says that investors are to blame for the situation they find themselves in. He says:

Without the board’s approval, founders cannot sell their stake. When the times were good and investors wanted higher stakes, they made the founders sell their stakes. Now they are crying. They deserve it!”

The entrepreneur adds that if the deal doesn’t work or if it doesn’t help Flipkart, then it will be further evidence that India will not give the kind of returns that other markets do. “In China and Japan, investors have got big returns. India is the last big e-commerce market. But in the other markets, they made money due to IPOs, which is not happening in India,” he says.

Coming to the reason behind our headline — a person who works closely with Flipkart says that SoftBank’s investment in Flipkart, if it happens, is a precursor to Alibaba’s involvement with the Bengaluru-headquartered e-commerce major. SoftBank holds just under a 30 percent stake in Alibaba. Masayoshi Son, popularly known as Masa San, is on the board of Alibaba. The latter is an investor in Paytm and also Snapdeal.

While it is speculation right now on whether Alibaba will try to bring about a merger of Flipkart and Paytm, it could invest in Flipkart separately. It makes sense for Alibaba to open multiple fronts in India against Amazon,” says the person who works with Flipkart.

Another individual said that Alibaba could follow “the Pakistan approach or the ISIS approach”. The Pakistan approach is death by a thousand cuts, where Alibaba will launch in India, invest in Flipkart, and continue to hold a significant stake in Paytm and be a constant irritant to Amazon. The ISIS approach is to consolidate India operations and, with the combined bulk, take on Amazon.

“This is a real possibility. Flipkart will be attractive for Alibaba,” says an investor. It remains to be seen what role Tencent, a rival of Alibaba and now an investor in Flipkart, will play if Alibaba wants to invest. But the two Chinese tech giants have together invested in companies before, like in switching chip startup Barefoot Networks. “They (the e-commerce firms) first ran out of money, then out of options, and now are running out of time. They will do anything to survive,” says an e-commerce industry insider.

The issue, he says, is that the companies need to show profits to list in India, and if they go to the US or London, the Amazon question will lead to lower public market interest. “They will need deep-pocketed strategic investors for longer than they or the investors thought,” says the e-commerce industry insider.

If Alibaba invests in Flipkart, then it will be an East Vs West battle between Masayoshi Son and Jack Ma, on the one hand, and Jeff Bezos, on the other, on Indian soil. Indian entrepreneurs and investors will then have to answer the question of how they ended up losing the Indian e-commerce industry to outsiders.

(With inputs from Athira A. Nair)