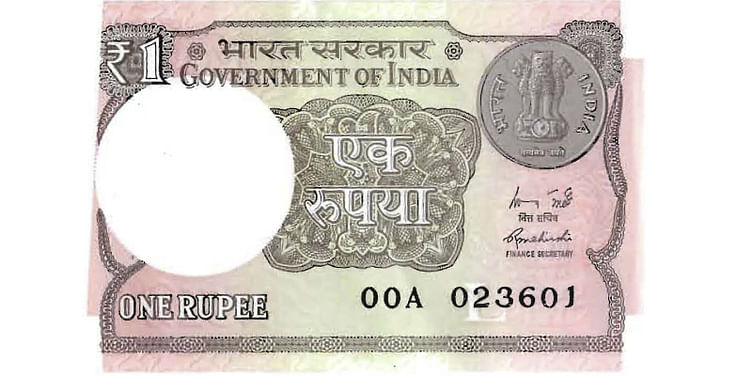 As detailed by the RBI notification, the colour of the Re 1 note shall be predominantly pink-green on both sides, with some other colours infused into the design as well. The dimensions of the new rectangular note will be 9.7 x 6.3 cm, and 110 microns in thickness.

The note bears the bilingual signature of Shri Shaktikanta Das, Secretary, Ministry of Finance, and has a picture of the new Re 1 coin with the '₹' symbol of 2017 issued with ‘सत्‍यमेव जयते’ and capital letter ‘L’ in the numbering panel. The numbering will be in black, in the bottom right portion of the note, in ascending order of numerals from left to right, while the first three alphanumeric characters (prefix) shall remain constant in size.

The flip or reverse side shall contain the words ‘भारत सरकार’ above the words 'Government of India' too, with the year 2017, and the representation of Re 1 coin, with the ₹ symbol and its floral design. Surrounding that will be a picture of Sagar Samrat, the oil exploration platform, and an authentic rendering of the value in 15 Indian languages in the language panel, with the year figure shown in the bottom central portion.