A shrine to conflict and alternative art and culture: Mirzapur’s Conflictorium 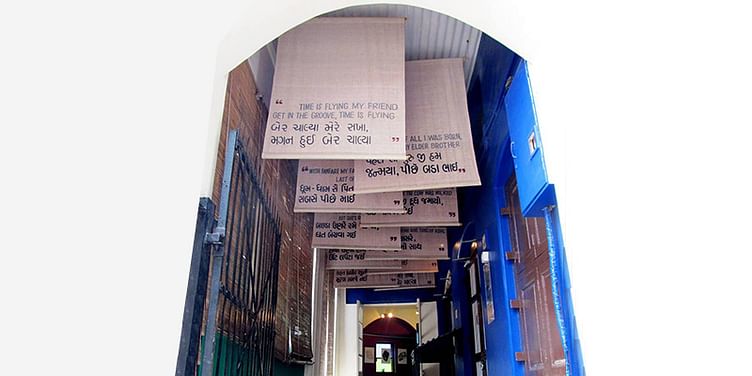 Avni Sethi conceptualised and created the Conflictorium in an old Parsi building of Mirzapur, Ahmedabad as an interactive space that expresses conflict through art and culture.

The Gool Lodge in Ahmedabad’s old, walled Mirzapur belonged to Bachuben Nagarwala, a Parsi lady and Ahmedabad’s first trained hairstylist. She had willed the building to be ‘used for something good’ and had donated it to Centre for Social Justice. On April 14, 2013, 23-year-old Avni Sethi turned into Gujrat’s, and possibly India’s, first Conflictorium, a museum of conflict.

A student of interdisciplinary design at Srishti School of Art, Design and Technology, Bangalore, Avni designed the Conflictorium as her final project. She admits,

“At some point, you have to come back to your own city and deal with its unfinished business. Do you say, 'Yes, this is how things have always been,' or do you change it?”

Thus was born her dream project, birthed and nurtured by a collaboration of Janvikas, Centre for Social Justice, and Navsarjan.

Ahmedabad’s legacy of space and opportunity for artistic expression had so far been confined to state-run auditoriums and display halls. That meant only those with a certain validated quota of talent and expertise got to run the show.

The Conflictorium was set up with the vision of invigorating the city with alternative art and culture, two words, Avni states emphatically, that she always uses together. The other aim of this two-pronged initiative was to begin a dialogue on conflict. To step out of and overcome its immediate traumatic history, Ahmedabad urgently needed a kindlier, yet effective outlet. The Conflictorium began and continued as an incubator of people’s voices, stories and memories.

Instead of shoving sensitive discussion under the carpet and getting on with it, here came a people’s museum that explored the many shades and brushstrokes that make conflict.

How many roads can a man walk down?

Today, this 10-member team has brought forth a vibrant and participatory space in the heart of an old city space seeping with tradition and multicultural life.

Avni, who also studied Performance Studies at Ambedkar University, Delhi, pours her soul and more than all of her time into the Conflictorium. She and her team brought different forms and techniques of expression together to create an intimate collage of people’s voices and thoughts. Memory, that is but a mere record of events and can be changed simply by rethinking or obliterating thoughts, is preserved and explored here in the nature of microhistorical research. Amidst a macro trend of history that is primarily the ruling power’s narrative, the Conflictorium is invested in making meaning afresh.

Avni uses her educational background to understand and design how this process as well as this space is to be located in a particular spatial and temporal context.

What do you do when your feelings are hurt? Do you go to war, or…

The underlying reason for any conflict is that somewhere, someone’s feelings happened to be hurt. In that sense, conflict – a disagreement, or a collision of opposing perspectives – is as normal as life itself. It is what we do with conflict, believes Avni, which is of importance. Violence is unacceptable.

With this overarching philosophy in mind, the Conflictorium team has put together four galleries on the ground floor of the Gool Lodge and four on the first floor, and have decorated the massive stairwell of the house in keeping with the spirit of the museum.

The Conflict Timeline attempts to depict Gujrat’s violent history since the inception of the state in 1960, through lived experiences. The Gallery of Disputes, designed by Mansi Thakkar, the Conflictorium’s graphic designer, uses audio-visual techniques and tells the tale of a donkey as it journeys through the complex socio-political fabric of its own world.

Among the other attractions of the Conflictorium are the Memory Lab, a room full of empty glass jars in which people can drop artefacts bearing memories of their lives, and the Sorry Tree, which harbours a display of apology and forgiveness notes. The tone is of participation and the spirit is of creating interactive narratives where individuals, and not majorities, are noticed.

Besides, the Conflictorium has a 40-seater auditorium and four galleries that are leased out at nominal rates for workshops, exhibitions, talks, and shows. The fee for the auditorium is Rs 4,000 per day, for which the team has a suggested donation plan – the donor gets an 80G certificate.

“The window is open for conversation. If people have limited funds, we try to manage the electricity bills for our auditorium some other way. It is more important they have their exhibition,” says Avni.

The back and front yards, too, are often used for exhibits and performances. Honouring the Gool Lodge’s once-residential past, the Conflictorium offers paid residencies within its premises. The residency spaces can accommodate two residents at once, and the resident artiste/writer/researcher interacts with the museum, its artefacts, and its audiences.

One day of meaning at a time

This practice of meaning-making and alternative expression that the Conflictorium introduced to Ahmedabad’s aesthetic scene has since witnessed the setting up of at least 10 such intimate, interactive auditoriums in the city. The museum runs independent of state agencies, and mainly off grants. The cost of its daily upkeep is Rs 5,555, to raise a year’s worth of which the team recently conducted a crowdfunding campaign. Never failing their goal to create stories, the museum team acknowledges donors by putting their names up on the ‘parent wall’ within the compound.