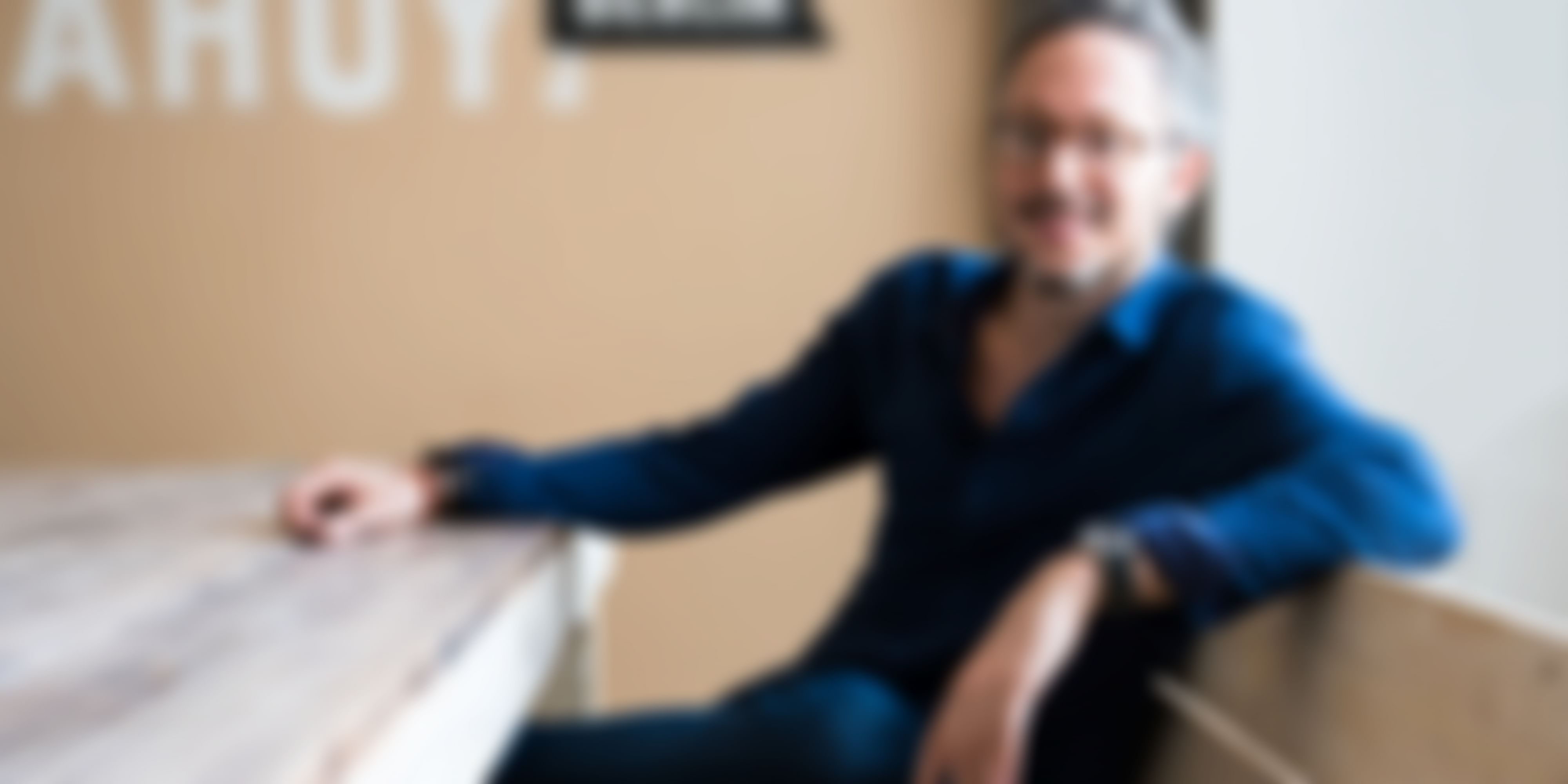 It's 10am on Friday morning at Ahoy!Berlin. Nikolas Woischnik walks into the co-working space with his trademark bandana around his head, his hair tousled, and looking tired for sure. Niko, as the local startup community calls him, has been busy making preparations for one of Berlin's biggest startup festivals: Tech Open Air 2017 or TOA.

Niko is a well-known influencer and serial entrepreneur. Together with his two cofounders Kerstin Bock and Carolin Lessoued, he runs three companies: TOA, co-working space Ahoy! Berlin with offices in Berlin and Brazil, and Openrs, a consulting agency. Eight years ago, Niko moved from Munich to Berlin, the startup capital of Germany to launch his entrepreneurial career.

Niko is at Ahoy! Berlin to talk with us about the TOA festival and the startup ecosystem in Berlin.

Niko sees Tech Open Air as an “interdisciplinary technology festival”, not as “another startup conference.” According to him, it mixes art with tech, touches upon societal concerns and seeks to engage the community at large. Here, talks are only one of the elements of the event.

“We do not want to just get tech and startup professionals together in this festival, but rather people from all areas of life, and all types of industries and disciplines like music, arts, science, politics and governance, to bring them together, to learn from one another, to exchange knowledge and ultimately instigate collaboration,” says Niko.

He adds: “We rather see Tech Open Air as a platform for others to build upon. And that manifests itself in so called satellite events.”

Niro explains that TOA's objective is to bring the larger community on board. Alongside the professional conference, TOA also supports 200 satellite events over four days in Berlin.

“The satellite events are not organised by us, but by the community, by large corporations, by universities, by science institutions, by galleries, record labels, of course startups and even consulates, embassies–all types of organisations that create their own events and take an active part in the festival,” he says.

Niko and his team expect more than 20,000 guests this year. Nearly 12,000 people attended the events last year, almost twice as much as the previous year. Since its launch, Tech Open Air has grown more or less 100 percent year on year.

100 free tickets for entrepreneurs from India

Niko informs that Tech Open Air does not see itself as a German event. It's just that 60 percent of participants are from Germany. Nearly four out of 10 guests travel to Berlin from Europe, the US or Asia. They come to “really get a rounded view of the entire ecosystem through all the satellite events that take place in the co-working spaces,” says Niko. While participation in the core conference formats cost between 360 and 630 Euro, there is no fee for most satellite events.

Since last year, the TOA team has started curating the satellite events that are associated with the TOA brand, but still “some are better than others.”

“But it really depends on your interests. Some are big events and they have big parties and large networking events, which can be fun. But there are also small events that just cater to very specific interests. I was at an event a few years ago. It was a very small event–maybe 15 people only. So maybe your first thought on entering the room would be ‘Oh, only 15 people! This event sucks. There are no people here’. But I stayed and I actually thought it was one of the best satellite events I had ever attended because those 15 people were just super-passionate and knowledgeable; they were exchanging information and it really created an environment for collaboration,” says Niko, adding,

Niko has seen growing interest from Indian startups in TOA in the last few months. “India is dear to my heart. I have been there nine or 10 times. It’s a great country. I have travelled there on a motorcycle. So, of course, I would love to welcome more folks from India to our event.”

Niko wants to learn more about India. “The last time I was in India–it was three to four years ago–I went to a wedding which was amazing--it is off my bucket list. But unfortunately, I have never been to India on business. So I actually cant wait to go and check out Hyderabad and Bangalore.”

Why Berlin is preferred by global entrepreneurs

Berlin holds special attraction for international entrepreneurs. “When I moved to Berlin it was the cheapest capital in Europe when it came to rent. And that attracted creatives and people who sought self-fulfilment and self-actualisation instead of a steady career,” says Niko, reflecting on the early days of the startup hub.

“Now, although the rent keeps increasing year after year, but Berlin is still an affordable city when you compare it specially with the other leading ecosystems in the world such as New York, Silicon Valley, Tel Aviv and London,” adds Niko.

A second factor in favour of Berlin could be its location. “Berlin is very central in Europe and also close to Eastern Europe which has a very strong tech community. Eastern Europe has incredible talent in the field of computer science. So Berlin has always had a strong influx of people from Eastern Europe.”

Then, there's the city's multicultural character. “Berlin has always been a very international city. Obviously due to historic reasons after the war–the city being divided among the winning powers of the war. Berlin is very cosmopolitan, and has this great breadth of internationality and that to this day is felt. It's an open city. People are welcome here from all cultures. The level of English is quite high," says Niko.

Comparing Berlin with Paris, he says: "I was in Paris last week, and nobody spoke a word of English, not even the taxi drivers. Berlin is easier for people from abroad to gain a foothold. And the startup scene now is totally international. In my team at Tech Open Air, more than 80 percent are non-Germans. And this is not so just at Tech Open Air; this is pretty much true for every Berlin-based startup that I know. Even the ones that have more Germans in their team, English, in almost all the cases, is the dominant language and this opens Berlin up to the world.”

According to Niko, who has travelled to most startup hubs in the world over the past 10 years, Berlin is also getting more diverse in its offerings and more competitive.

“I was very impressed with Austin, Texas. Austin is a strong emerging ecosystem. Los Angeles is interesting because it is very inter-disciplinary. Films and music play a very big role in their ecosystem and they have created apps like Snapchat and Tinder. They are putting LA on the global map of the startup ecosystem” he says.

According to him, “Tokyo, where we did a TOA event, the startup ecosystem is still very small although it's a huge economy, a big city. I have also heard great things about Romania. I think every ecosystem has its own strengths and while the Scandinavian ecosystem, for example, is really world-class when it comes to design and user experience, Los Angeles will likely develop into a strong ecosystem for VR and AR, tapping into the existing culture and the economy there." He adds,

Silicon Valley is a very software-driven ecosystem; Israel is kind of global from day 1 because their own market is so small. And then if you look at Berlin, Blockchain is a technology that is very passionately followed here. The city could really grow to be the Blockchain capital of the world.

Advice from a local expert

What would his advice be for an entrepreneur wishing to get acquainted with the Berlin startup ecosystem? “If you, let's say, are coming from India to Berlin outside Tech Open Air, I think the co-working spaces are great for a first stop. There are creative spaces like betahause, Agora, our space Ahoy! where you can just walk in, sit down, drink coffee and get talking with people. They have events running every week,” he says.

Before traveling to Berlin, one can also join Facebook groups such as Startups Berlin or Berlin Startup Events. Niko recommends famous St Oberholz Café at Rosenthaler Platz, which famously was the first office of SoundCloud founders when they didn't have one. The buzzing café is right in the heart of where most of the startup action in Berlin is concentrated.