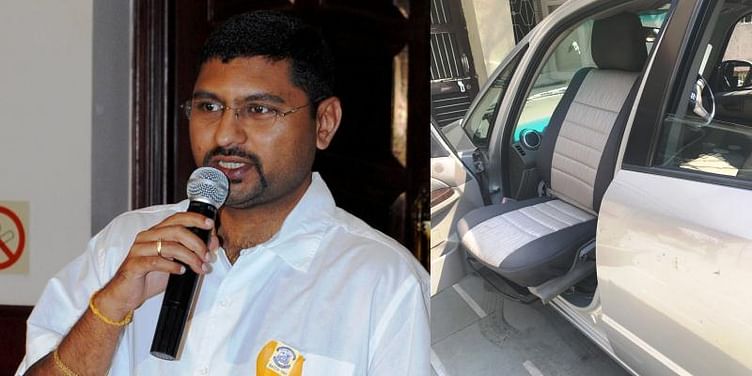 The seat is removed, the mechanism is installed, and the seat is put back. So there is no modification made in the car’s structure or core functioning, except that it is now disabled-friendly.

In his own unique way, Anand Kutre, a 41-year-old entrepreneur from Bengaluru, is on a mission to make cars accessible for persons with disabilities. He has designed and built a mechanism that can be easily installed under a car’s driving seat, making it disabled-friendly.

Starting up, over and over again

Anand holds a bachelor's degree in mechanical engineering from Gogte Institute of Technology, situated in his hometown Belgaum, Karnataka. He then worked in Pune for a few years, after which he shifted to Detroit, USA in 2000, where he worked for Chrysler's Jeep and truck division.

In 2006, Anand moved back to India and started Augen Technologies, an engineering services company based out of Bengaluru, with a friend. "Within three years of starting the company, we were making close to $5 million (Rs 24 crore) in terms of revenue and had about 200 people working for us," he adds.

However, due to differences with his partner, Anand moved on in 2010. “After the initial success we saw, I wanted the company to go in one direction and my partner wanted it to head in another. I decided to step out,” he says. He started True Consultancy, a startup whose core focus was on innovation in India using technology. Anand adds, "The company was not started for the disabled. Instead, our main goal was to create real impact in society."

Making cars accessible for the disabled

Anand remembers his days of living in the US. Working in Detroit, the heart of the American automobile industry, already had much learning to offer. “I remember my friend’s roommate who was disabled from below the neck. We used to take him out, and did so without any difficulty, because the cars and streets there were disabled-friendly,” he says.

True Consultancy worked with Toyota during its initial days. The car manufacturing giant wanted to launch in India, something similar to their Welcab project, which is engaged in making cars accessible in Japan. “I made a few designs that were patented by Toyota, but they didn’t take off. I continued working on the problem, came up with my own design which was much better, and got it patented,” Anand adds.

Turn Plus is designed to make car travel easy for a disabled person, using an easily installable swivel seat mechanism. “The original seat, along with its track and reclining motion, remains intact. The seat is removed, the mechanism is installed, and the seat is put back. So there is no modification made in the car’s structure or core functioning, except that it is now disabled-friendly,” Anand says.

Available at the low cost of Rs 25,000–30,000, Turn Plus comes as a boon not just for persons with disabilities but also for those suffering from back pain, knee pain, and arthritis.“We came across senior citizens who avoid travelling simply because they find it difficult to get in and out of the car. Our product will help them hit the streets again,” Anand says.

Anand is currently reaching out to car companies to help take the technology to people. “We have already sold a few units to car companies including Toyota, Renault, and GM. We are also in talks with cab companies like Uber and Meru, and with Accenture to improve their mobility,” Anand adds.

Anand is also planning his next product, which will “have a wheelchair attached to it. The entire seat will come out of the car and help the person sit on the wheelchair,” he says. Anand is also planning customised products where leg pedals will help run the wheelchair. An attached live camera will ensure that a person with disability has all the tools needed for free mobility. Anand has already started working on the mechanical version.

Presently working with two designers, Anand plans to continue making in India. Turn Plus is patented in India, and the manufacturing is done by Sahana Engineering, a small machine shop in Bengaluru. “We had other options, but since they understand our requirements better than anyone else, we decided to work with them,” he ends.