Buttalks, an underwear subscription service from Chennai, wants men to 'diversify their portfolio' 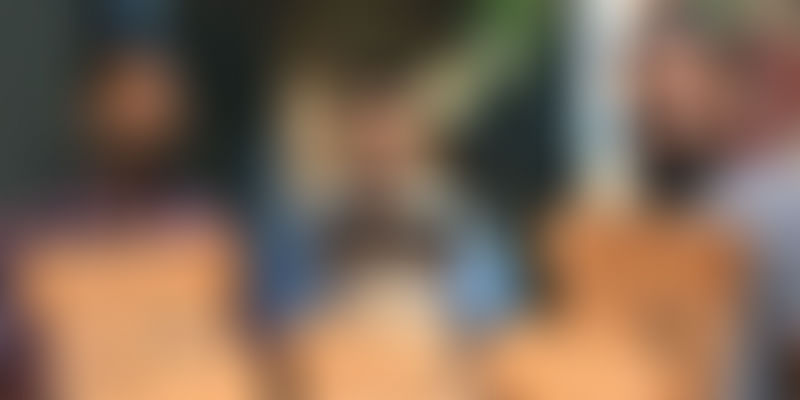 What happens when a product designer, engineer and an MBA grad see a gap in the men’s undergarments space? They figure out a solution that aims to help lazy and clueless men make better choices when it comes to innerwear.

Most men buy new undergarments only if they are starting or about to start a relationship. The rest of the time the duty falls on their mothers, and then their wives, according to a report by Debenhams.

Over a phone call with YourStory, Brijesh Devareddy, Co-founder of Buttalks, compared undergarments to toothbrushes and said:

Most of us just don’t know when to throw them (toothbrushes and undergarments) out… Men tend to own and use an undergarment long after it is discoloured, tattered, stained, etc., as they think it is a product that isn’t seen by others and hence doesn’t matter.

Brijesh also found out that tattered underwear isn’t a pleasant sight in college hostels and also in one’s personal life. Here is the story of how Brijesh, Surej Salim, and Manish Kishore co-founded an underwear subscription startup based in Chennai.

Buttalks aims to help men keep up-to-date with the latest styles in undergarments and also have a fresh stock, every few months or as they need them. Brijesh graduated in Product Design from Symbiosis Institute of Design, Pune, and is a contemporary sculptor and installation artist.

It was during one of his work assignments that he had a chance encounter with his co-founders, Surej and Manish, who also run Digitally Inspired Media, a creative digital agency.

Though an engineer by profession, Surej found his true calling in the entertainment industry and went on to work as a creative producer with multiple television production houses in Mumbai. Manish, on the other hand, is an MBA graduate, Director & CEO of Digitally Inspired Media.

Talking to YourStory, Brijesh noted that while he was in college, most guys generally paid little attention to their undergarments and it was not unusual to see bad or old worn-out undergarments all over the hostel. Brijesh had also founded Wankai, a user empathy research and development firm, and spent some time researching about the space and probable causes.

Based on the research, he realised that men, in general, did not prioritise undergarments in their wardrobe. Most would generally shop at length for shirts and trousers, but not undergarments. According to him,

Underwear was a product that they usually bought on the way to the billing counter, as they were strategically placed there. Also most men would inevitably buy the same brands every time. They did not put in much effort to choose, apart from the size.

Brijesh thought that a subscription model would be perfect for this segment, as customers could share their preferences and then get a mystery box of undergarments delivered to their homes. The goal was to leverage the help of personal stylists and give customers access to various international and indie brands and help them diversify their ‘portfolio of underwear’.

The proof of the pudding

Brijesh started the company with an initial investment of Rs 3,00,000, which he raised from the sale of his artwork. He got the brands in place and also enlisted the help of a stylist, Zasha. Buttalks website describes her as,

The most surreptitious personal stylist in the country. She's been undercover across the world from New York to Tokyo. After a decade of styling the most influential people's underwear, she is now back home.

Intrigued by the description I tried to coax Brijesh into revealing Zasha’s real identity. He laughed and joked,

You’ve heard of The Stig from Top Gear, right? Zasha is our equivalent of The Stig.

On Top Gear, the identity of The Stig is a secret. The character wears a racing suit and helmet to conceal his identity and sets lap times for cars tested on the show. For Buttalks, Zasha works behind the scenes, setting the trend for their mystery subscription boxes for different user tastes and price points.

The launch and how Buttalks works

Though he had a good understanding of the market and the core business, Brijesh felt the need to make a big splash in terms of marketing, to gain eyeballs. This is where the expertise of his co-founders, Surej and Manish, and their work with their creative digital agency came in.

Together the trio conceptualised a marketing video to express their ethos and positioning. Brijesh recalled, “We have sent out more than 50 pieces in 10 days even before we went live with ads.”

The video went live across social media in July 2017 and Buttalks saw a rapid rise in orders. Brijesh also claims that he received investor interest based on the video and the offerings on their website. But he decided to work on the platform for a few more months before exploring synergies and looking to close term sheets.

Brijesh explained that an overwhelming majority of Buttalks’ customers so far, have been organic, from places as far-flung as Rohtak and Ghaziabad. Since customers receive a mystery box of undergarments, customer satisfaction isn’t an easy task.

But Brijesh says that customer sentiments and feedback has been overwhelmingly positive so far. He said,

They really appreciate the handwritten notes by the stylist, and love her curation. We never expected people to talk openly about their undergarments, but most customers have vouched for the service to their friends publicly… Most of our customers have written back to us promising to get their friends to subscribe as well.

The lifecycle of a Buttalks undergarment

Buttalks has a three-step process for customers to place their orders. First, they can select a ‘sampler’ or ‘annual subscription’ plan based on their comfort. The sampler plan includes one order of three undergarments, while subscribers of the annual plan get three undergarments shipped every four months.

Buttalks currently has three plans and the price points vary from Rs 999 to Rs 4999 for samplers and from Rs 2700 to 14,000 for annual plans. Each price bracket includes a specific variety of brands that are part of the package.

Brijesh believes that once customers add Buttalks undergarments to their wardrobe, they will be able to see a stark difference between what they had and what they have just received. He envisions that this will convince customers to opt for the annual plans, once they have tried the samplers.

While undergarments are hidden from the public, Brijesh remarked that they are an essential part of one’s style statement. He believes that as much as men would like to see their significant other in fancy lingerie, women also want men to raise their game (pun intended).

To facilitate this, Buttalks also includes the option of ‘kinky underwear’, which men can either opt in or out of.

According to a recent report titled, Indian Innerwear Market: Trends & Opportunities, the innerwear industry in India holds immense growth potential, evident from the entry of large international brands in the Indian market in the last few years. The increasing size of the organised market and declining share of the unorganised market, shows a distinctive shift from price sensitivity to brand sensitivity.

The report also noted that based on positive macro and demographic fundamentals, the Indian innerwear market is expected to witness expansion in the near future. However, lesser product portfolio and high costs of brand building are expected to be the challenges for this sector.

Buttalks claims to be India’s only underwear subscription service for men. I tried verifying this claim and found that while Amazon offered a ‘Subscribe and save’ option on men’s undergarments, the options were quite limited and for a niche target market.

Manpacks seemed to be another plausible choice offering subscription services for men's underwear, socks, razors and the like. But the platform currently seems to be inactive, with no products in stock.

Brijesh and his team are happy with the progress so far and the goal is to now scale up their order volumes and also focus on newer mixes and blends to help customers with discoverability, rather than stick to one brand only.

While they have started out with a focus on men’s underwear, Brijesh added that depending on traction, they may venture into complementary markets like- women’s undergarments- too in the future.

Buttalks seems to have a lot of things going for it with a diverse team, quirky marketing strategies and interested consumers. Dollar Shave Club, which was acquired by Unilever for $1 billion, too had a subscription service and took off after their viral ad. Can Buttalks walk in the ‘pants’ of Dollar Shave Club?