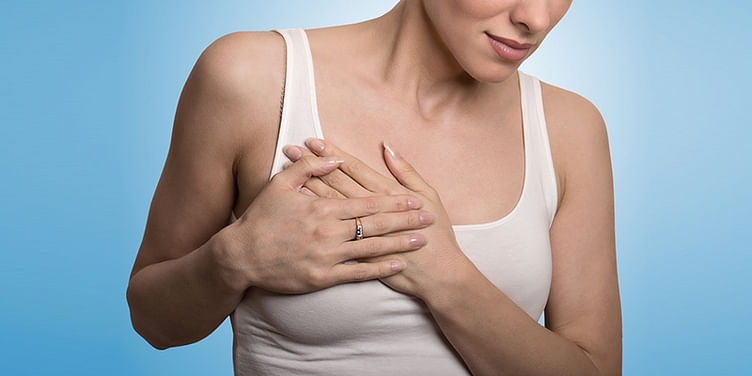 In a study conducted by Avon, less than half of the women surveyed were confident about knowing which kind of changes in their breasts are a sign of cancer, but a quarter (25%) still think that a lump is the only sign of breast cancer that can be identified without medical equipment.

We may be nearing the end of the 33rd annual Breast Cancer Awareness month, but in India, awareness levels are still alarmingly low. According to a study conducted by Avon Products Inc, only two in five people –or 42% - are confident about knowing which kind of changes are a sign of cancer – and a quarter (25%) still think that a lump is the only sign of breast cancer that can be identified without medical equipment.

The study, spanning 19,000 respondents, was in line with the launch of their pan-India initiative #PayAttention, targeting men and women alike, to take up a simple breast self-examination to detect early symptoms. The World Health Organization estimates that breast cancer kills more than 500,000 women globally every year, a number that could be greatly reduced if cancer were detected at an earlier stage. According to Avon, that number could be as high as 70 percent.

Meena Sakhpara, a Mumbai-based homemaker who is a survivor – rather, conqueror - of breast cancer, says time is of the essence when it comes to not only the detection, but the curing of breast cancer. Diagnosed with breast cancer at the age of 56, she says she was able to catch it at the second stage not only because she performed self-examinations of her breasts routinely, but also because she had been getting mammographies done regularly since 1993, when she had a benign tumour in her body removed. “Since that operation, I started monitoring my health regularly. While I did go for mammographies pretty frequently, I started getting them every two years for the past ten years because the risk in women above 40 goes up substantially. Mind you, getting mammographies too often is also not good for your body as the rays are harmful,” she says.

The findings also show there is a knowledge gap amongst women globally about what the symptoms are for breast cancer and how to lower the risk of developing the disease. When asked to identify the ten common symptoms of breast cancer, only 2% managed to select all ten correctly - namely, changes in your breast, irregular bleeding, rectal bleeding, discharge, bloating, unexplained weight gain or loss, persistant cough, change in lymph nodes, fatigue, and lastly, changes in your skin, as listed by WebMD.

Despite 73% of respondents saying they look out for changes to the appearance of their breasts, many admitted that they aren’t confident about recognizing those changes. The study found that more than half of those surveyed (60%) would hesitate to seek medical advice for a variety of reasons, including embarrassment, fear and not having access to a regular doctor. When Meena noticed her right breast growing in volume for four or five months, she attributed it to ageing, but decided to go see a doctor about it nonetheless, to be completely sure. “The skin of my breast had also started feeling somewhat like that of an orange. I saw a doctor right way, and she told me – you are not going home, but straight to a radiologist. My mammography was anyway due four-five months from then,” she says.

In the sequence of events that follows, promptness and resilience is everything. Meena said that she went to the radiologist for a mammography and sonography, got the results the very next day and took them straight to an oncologist, who was able to confirm right away that her tumour was carcinogenic. “We set up the sampling process of the tumour immediately. Mine was caught at the second stage – first stage is obviously better, because one may not even have to get their breast removed. However, I wasted no more time, and in fact, started chemotherapy the same week. It’s a ticking time-bomb, and there is no point sitting on it, moping. Quick decision-making is key, as you cannot anticipate at what rate the cancer would advance in your body,” she says.

The survey also found that the lack of knowledge when it comes to identifying signs and knowing the risks of breast cancer may be due to a lack of information – 30% said that they haven’t been given any information about changes to their breasts that could be a cause for concern.

In fact, the tabooization of the subject still acts as a major hindrance to the dispersion of information. “Two people in my social circle had breast cancer- but they just didn’t share the information with anyone. One of them did not even inform their immediate family - because there is still so much stigma, and this acts as a big hindrance to awareness . People who have undergone this and overcome it especially, must spread the word and share their experience. This could save lives. As survivors, you should be proud,” recounts Meena.

There is also low awareness of some of the important lifestyle changes that could prevent breast cancer. Almost two-thirds (64%) unaware that exercise could help lower the risk of developing breast cancer. Similarly, 63% of those surveyed do not know that alcohol consumption is linked to a higher risk of breast cancer. “Let me tell you, even though I had read up a fair bit, I was still unprepared for what came after,” Meena quips.

Avon, a key corporate partner of the global war against breast cancer, wants to educate women to take out less than five minutes every month to do a breast self-examination. And according to Meena, besides monthly self-examination, and visiting the gynaec at least once should be incorporated into your schedule. “Everyone has lumps in their body, it is crucial to confirm that they are benign. After 40, every woman should get mammography every two years. Timing was the key factor in my treatment. The sooner you take a call and start, the better your chances in getting it treated,” she says.

One in every two Indian women diagnosed succumbs to this disease, but doubling the duration of hormone therapy for women with early-stage breast cancer from five to ten years reduces the risk of recurrence and developing tumours in the other breast. "Your reports enlist the most likely reason behind your cancer, and the course of treatment is decided accordingly. In either case, once you notice something amiss, waste no time in starting off your treatment," says Meena.

A delay in early diagnosis of breast cancer may kill 76,000 Indian women in a year by 2020 and hence it is essential that the requisite steps are taken to identify the ailment during the early stages itself.