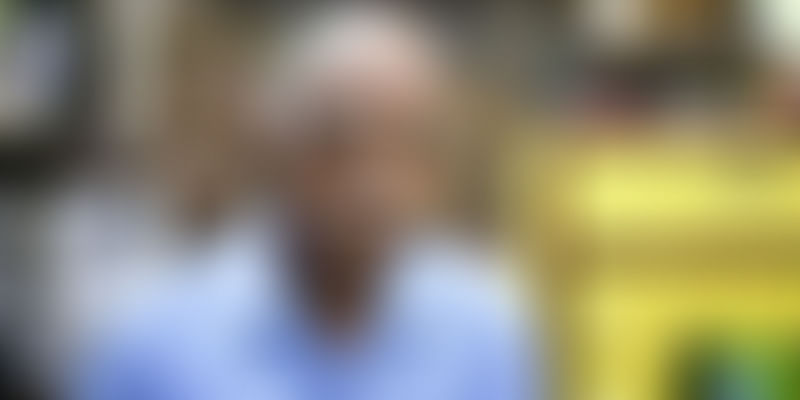 From his tiny kitchen in Borivali, 59-year-old Mark D’Souza has been delivering free lunches to needy senior citizens in Borivali’s IC colony since 2012; the number of lunches is slowly growing.

Every day, a little afternoon, about 56 senior citizens in Mumbai wait for a certain man to walk through their doors, for he comes bearing son-like devotion packaged in two wholesome meals, and generous servings of his time and company. Mumbai’s Mark D’Souza is the lifeline for those who do not have the means to eat healthy meals, but his service to the community goes way beyond the dabbas he personally delivers to their doorsteps.

Born in Karnataka but schooled in Mumbai, 59-year-old Mark D’Souza’s inspiration to undertake this noble work came from the memories of hunger throes of his own childhood, after the death of his mother.

“When you lose your mother, the whole household comes down. I had a brother and a sister – and we faced the same predicament, when hunger struck and we had no means to gratify it immediately. I realised that senior citizens may be facing the same issues,” he says.

He sought out his wife, Yvonne D’Souza, to understand just how severe this problem might be. As the president of the IC Women Welfare Association with 400 members, Yvonne confirmed that there were indeed many senior citizens who had been rendered helpless due to issues ranging from the loss of their partners or severe health conditions.

So, on November 14 - Diwali day in 2012 - with Rs 5,000 and five to six beneficiaries, Mark kick-started a journey that would garner widespread respect from the community and media alike.

“My wife is the backbone of this initiative. Together, we don’t just prepare food; it is blessed food – with less salt, less oil, less ghee, in order to suit their special needs. There is no quota. If someone needs five chapatis and another needs eight, we pack those many,” he says.

The couple has hired two people for the cooking, which starts at their own home at 5.30 am every day. They make 250-300 chapatis daily; requiring roughly 90 kg wheat for 15 days. Up to 8-10 kg of vegetables are used at one go. The tiffin goes out every afternoon, and the quantity suffices for two meals. Each dabba has chapatis, dal, rice and vegetables. Three months ago, they even started making chapatis suitable for diabetic patients.

Mark and his son, Kirk, deliver the tiffins personally.

“Kirk takes a rickshaw to IC colony where there are about 25 people, and Mark takes his car to Kanarpada, Dahisar etc. Some dabbas are delivered to Andheri and Mahim too, through dabbawaalas,”  says Mark.

Mark says: “They are like my parents and deserve the best. They wait for me every day. We offer biryani, fruits and custard when there are festivals etc.”

His son was not a part of the initiative from inception, but decided to join in an inspired moment.

“Kirk was working in Pune when an article about my work came in the newspaper. His boss asked him if he knew me, because he read that I also lived in IC Colony. When Kirk informed him that I was his father, his boss immediately asked him, 'why aren’t you there, helping him?' Kirk phoned me the very next day, saying 'Dada I want to join you,'” Mark recounts.

One thing led to another…

As word got out, Mark’s initiative scaled gradually, touching more and more beneficiaries. But his appearance on the Star Plus reality show Aaj Ki Raat Hai Zindagi hosted by megastar Amitabh Bachchan is what catapulted his project to another level.

“That was a big boost; the world came to know who I am. I received many calls from Canada, New Zealand, England etc, seeking advice to replicate my model,” he says.

Mark was even shortlisted by Mumbai-based startup Cheep, as they recognised the work of humanitarians and awarded them free makeovers for their homes. “When we spoke to his beneficiaries, we came to know that he not only provides the food but anything that they require - whether it's their home repairs, their caretaking staff issues or even their medical well-being,” says Diwan Rahul Nanda, group chairman and founder of Cheep.

To fund this work, the family has dipped into their earnings from Mark’s real estate business based in Borivali. He also runs an agency for about 250 private nurses, ward boys and maushis to look after the sick and the elderly. In his youth, he worked in Libya in the hotel management field for an English company.

“My work at Crystal Care services and my savings are what power this initiative. There are people who come forth and insist that I accept their donations, money, fruits etc. I am not doing this for the money or my own luxury. I am collecting money in my account only so that someone else can take my initiative forward,” he says.

For many of these beneficiaries, Mark is not only their provider but their entire support system as he often offers to run their errands like bill payments and depositing cheques etc.

Once, a senior citizen slipped and fell in his house. Despite being in Madras at the time, Mark informed the man’s niece from Bhiwandi and swiftly called a local corporator he was on good terms with to ensure that he was taken to the hospital and treated immediately.

Currently, however, the size of the D’Souza house is proving to be insufficient for the burgeoning scale of their work. “I am finding it tough because my house is 1 BHK, and with scale, we need a bigger space so I want to move into a bigger house – which is a very tough thing to do in Mumbai in current times,” he says.

But he continues to swear by the joy of giving. “When you give, the satisfaction is unparalleled. That good night’s sleep – that cannot be bought. My message to everyone is to do at least one good deed a day, and you will touch 365 lives in a year,” Mark says.