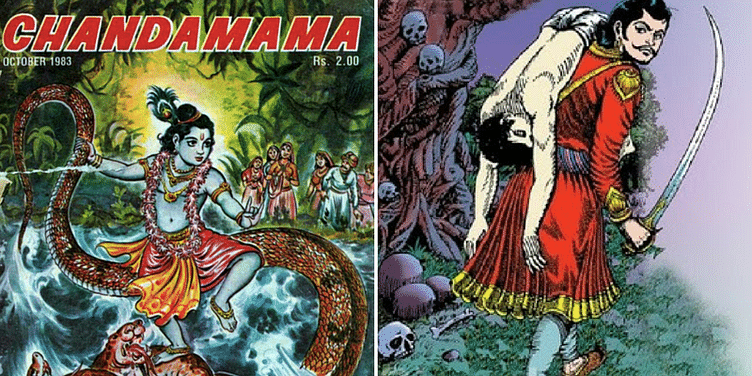 Packaging the stories and folklores with illustrations, Chandamama is bringing the tales enjoyed by our grandparents back in fashion, in digital format.

Before the advent of Tinkle, Amar Chitra Katha, Chacha Chowdhary, or even The Adventures of Tintin and Archie Comics— one comic book captured the imagination of India even before the nation got freedom.

Packaging the stories and folklores with illustrations, Chandamama brought back grandparents tales in fashion. The famous Vikram-Betal stories, too, were launched through this magazine.

Adapted from the ancient Sanskrit work Baital Pachisi, the never-ending story of King Vikramāditya and Vetala (Vampire), brought wide repute to this magazine.

It also became a launchpad for artists like M.T.V. Acharya whose painting brought the Mysore Dasara Exhibition alive in canvas; it fostered the seeds of gender equality and empowerment with T. Veera Raghavan, who signed her work as Chithra; among many others.

The magazine continued to allure its readers till July, 2013 enjoying a mass readership base of over 2,00,000 people. Today, the old editions of this magazine is back for the audience in digital format in English, Telugu and Hindi, and are available for free on the official website.

Talk to the older generation and the mere mention of Chandamama takes them to a world where information and entertainment were bundled in a comic format.

The first edition of the magazine was printed in July 1947 with the cover enveloped in four colours, while the illustrations inside were done as line drawings. Founded by two friends B.N. Reddy and Chakrapani, the magazine thrived in the 20th century and was published in 14 languages, including Sanskrit and Santhali.

It was meant to lead and inspire the children of India, despite the differences in their mother tongues, to dream, enjoy and imbibe the spirit of the vast Indian heritage through stories, Gouse Pasha, a reader says.

The magazine was published as Chandamama in Telugu and as Ambulimama in Tamil. The Kannada edition first appeared two years later, in July 1949, followed by the Hindi version in August 1949.

In 1952, the Marathi and Malayalam editions were released as Chandoba and Ambili Ammavan respectively, followed by Gujarati in 1954, and English in 1955. The following years saw multiple renditions of the magazine in multiple languages and, soon, Chandamama gained a pan-India appeal.

Chandamama captured history in the making and the stories were drawn from several Indian texts, both modern and historical.

The main features were written by Kutumbarao and all the stories were bound by a common thread of moral values. Mythology, epics, fables, parables and even hearsay became the narratives for the magazines.

With an illustrious past the magazine is back for consumption in the digital era. Here’s wishing you a happy reading time.