This Hyderabad duo's startup has trained 7,000 teachers and 1.2 lakh children 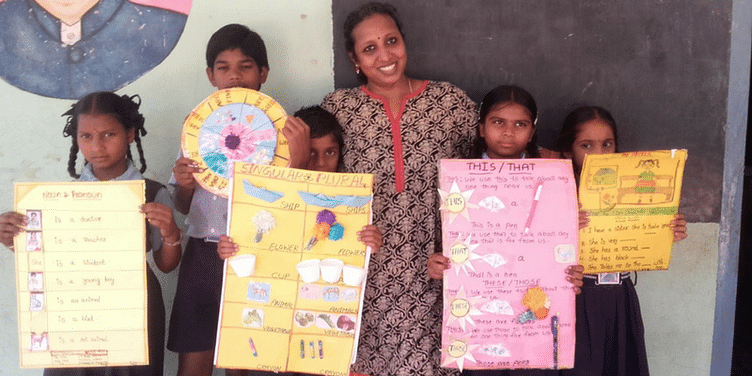 Ignis Careers aims to address the quality gap in life skills and English language learning at the school level through specialised interactive curriculum.

The number of school-going children in India is among the highest in the world. Approximately 210 million children, in the age group of 6–14, are served by roughly 1.6 million schools and 6.4 million teachers and para-professional educators. While India boasts of near-universal access to primary education (96.7 percent of children aged 6–14 enrolled in school), the system produces appalling outcomes.

With the aim of addressing the flaws in the education system and improving quality education for the poor, Rennis Joseph and Imma Mary set up Ignis Careers in 2009. Their fight is against the culture that has mistaken rote learning to be purposeful and life enhancing.

Coming from socially and economically backward conditions and studying about the education system in depth, the founders readied themselves to help people break the cycle of poverty.

We identified these gaps among the first-generation learners who went to school but lacked guidance or an enabling culture that would help them come up in life, says Imma.

She too is a first-generation learner who faced several challenges in her schooling given her socially and economically deprived conditions and the limited educational awareness that comes with it.

Imma was motivated to work for the development of the poor right from the time she was in college. While doing her MPhil at JNU, she studied the lives of the migrant poor and the factors that perpetuate their cycle of poverty. She realised how skill-based, purposeful education is a sure measure to break the vicious cycle of poverty.

While doing his PhD at JNU, Rennis worked on a United Nations High Commission of Refugees (UNHCR) project, coordinating an English and employment skills programme for Burmese and Afghan refugees. He realised that 60 days of skill-based training could make young people confident, helping them in finding employment. This convinced him of how empowering English and life skills could be.

His later experience teaching in colleges across India made him work towards bridging the gap in the current education model.

Rennis opines that the current education system is based on a number of misconceptions — like the more exams one takes the more one learns and that the size of the school bag determines the quality of education imparted — that are very dangerous.

After leaving JNU in 2002, both of them worked in the education and development sectors for seven years. These experiences inspired them to start Ignis Careers.

Ignis aims to improve quality education for the poor through capacity building and skill enhancement programmes for schools called the English and Life Skills Lab (ELSL).

Ignis designs innovative and interactive curriculum that promotes a purposeful, collaborative, and joyful learning culture at school. The journey started with their work in Banapuram, a village 30 km from Khammam town in Telangana. Starting with some of the internationally acclaimed curricula, they realised how alien most learning programmes are to the cultural contexts of the learners.

Students could not relate to urban concepts of food, clothes etc., and even concepts related to weather were alien to them.

The learning programme Ignis develops takes into account the learner’s age, cultural context, and skill level. In Banapuram, the village is the classroom, and over the last six years the enrolment in the school has doubled from 120 to 240. The number of students enrolling in higher education is almost 90 percent, including girls.

Many of the marginalised, socially and economically underserved communities consider education the most impactful investment for their children. It is like a magic bullet.

"But the rote learning-based system does them a huge disservice, alienating the children from their roots on the one side and leaving them unemployable on the other,” Imma adds.

One of the worst superstitions is that anything other than learning by rote is a waste of time. This deprives students of opportunities for creative expression, retarding critical thinking and interpersonal and coping skills. If the rate of unemployability is rated above 85% in India, lack of life skills learning is a major factor.

Apart from the lack of life skills, there is enough evidence to show that proficiency in English has an outsized impact on a student’s ability to achieve secondary and tertiary academic qualifications as well as boosting their career prospects.

At the core of Ignis’ activities is the research team. They have been working for more than six years. This rigorous participatory research helped us design an integrated model of imparting communicative English and life skills.

"Over the last eight years we tried to devise models to affordably build the capacity of teachers and students in schools. Our life skills models are based on the concepts of life skills promoted by UNICEF and WHO,” says Rennis.

Since 2010, Ignis has trained about 7,000 teachers and 1,20,000 children. It has supported about 600 schools across India, mostly in the Andhra-Telangana region.

In 2017–18, it reached 60,000 students and 1,500 teachers in 100 low-cost affordable private schools and government schools catering to urban poor and rural areas.

Now, Ignis is beginning to spread its wings beyond Andhra and Telangana and will extend its services to low-income states from the coming year onwards.

“Based on our Banapuram experience, we started a Rural Teacher Fellowship programme in 2015 with the support of HDFC. Through which we currently support 30 government schools around Khammam . This fellowship selects teacher aspirants from rural areas, mostly people with Bed and DEd qualifications and places them in government schools,"says Imma.

"The teacher fellows receive more than 400 hours of training in a year and provide about 120 hours of training to the 4,000 students they teach. We have also been working with the Andhra Pradesh Skill Development Corporation, supporting 40 government schools in AP. Apart from that we work with Naandi Foundation and United Way Delhi,” she adds.

What has been most satisfying is the findings of the lean data survey done by Acumen Fund, a major US-based impact investment fund. Ninety-eight percent of the parents surveyed responded that their children have improved their level of confidence and also their English skills.

The best finding of the survey, to Imma and Rennis, is that 97 percent of the parents found that the “quality of life of the students” had improved. “That vindicates our efforts.”