Why should money be the only currency we use? 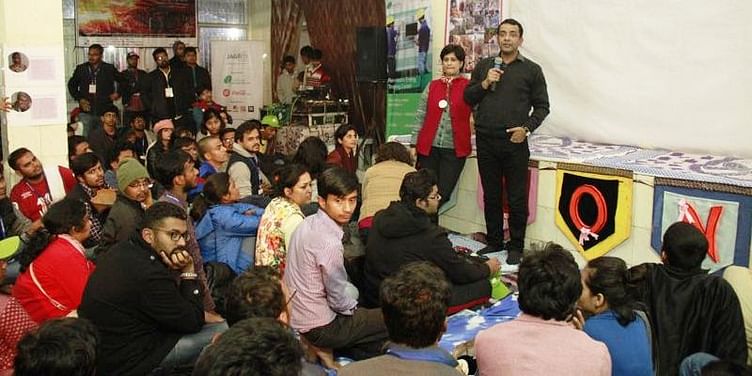 We don’t need new answers to create change; what we need is a fresh pair of eyes to look for the answers already in front of us.

What follows is not a trick question.

If you had to create a revolutionary new menstrual hygiene product, would you improve an existing design using cutting-edge technology and insights from ergonomics? Or would you clean and stitch together donated cloth?

It is especially hard for us to see the second option as revolutionary: a sanitary napkin made from thoroughly clean but ultimately used or “second-hand” cloth. Our urban, privileged perspective makes us balk at the very prospect. But think about it: unlike its sleeker cousin, a cloth pad doesn’t burden the ecosystem with plastic and is also more affordable. It creates a disruption in the conventional technology behind menstrual hygiene products that, in the last few decades, has focused mainly on making existing napkins thinner and more leak-proof. The assumption is that what a woman wants most from a sanitary product is freedom from leaks; but what if, what many Indian women are first looking for is a more affordable alternative?

And that’s why cloth pads, the underdogs, are the true revolutionary product.

That’s the thought process behind menstrual hygiene products made from cleaned discarded cloth and distributed to women in villages and slums. In a country like ours, where women in far-flung villages still use sand, ash and rags during their menstrual cycles, cloth pads are an instrument of dignity, comfort and hygiene.

Cloth napkins are just one way in which organisations are working to create disruptive social change through innovation.

Buzzwords like insights and inspiration are only meaningful when they challenge known ways of looking at things. Working in the social space, a crucial learning has been that we don’t need new answers to create change; what we need is a fresh pair of eyes to look for the answers already in front of us. To arrive there, we need to ask the right questions.

Why does money have to be our only currency?

What if you could pay people in cloth to repair a road in a village or recharge a water pond?

What if we could use urban discard for rural income generation? What if we transported discarded cloth to rural women for them to convert into usable and marketable commodities, such as traditional mattresses, quilts and aasans?

World over, economies are based on money as currency, and all economic change works along this model. But have you ever thought about what would happen if we could use other currencies? Which existing resource could serve as an alternate, parallel currency?

A viable answer that unfurls in front of one’s eyes in all its woven glory is cloth or kapda - One of the three basic pillars, along with food and shelter, of human existence, and as it happens, a huge component of urban discard. Imagine if you could collect thousands of tons of this material and direct it to rural communities as reward for their labour, bypassing money as a currency altogether. The macro outcome of this multi-sectoral work can be long-term impact on curbing rural to urban migration and enhancement of economic activities.

Urban discard can also be used as tangible and intangible currency in other ways: urban school material collected by initiatives can act as incentives to get rural children to school. Stapler pins from collected paper can be directed to scrapyards. Currencies are all around us, but are we thinking out of the box on accessing them? Are we asking the right questions, like the one that follows?

Growing a non-governmental organisation to an effective, pan-India scale has its unique challenges, such as building synergy with bureaucracy and governments. Experience tells us the most optimal way to negotiate this sphere: go micro, rather than macro; go to the panchayats, rather than larger agencies; to effect changes.

Staying close to the ground can lead to ground-altering changes.

For instance, why should one follow a preconceived, set parameter about rural development? A more radical approach would be to turn to the panchayats and village-dwellers themselves, the repositories of hyperlocal insights, about the direction developmental work should take.

For many of us “broad, cement roads” equal development, but in some villages, the inhabitants have come to organisations to ask: Does a city road make a bullock cart travel faster? So, we ask ourselves in turn, does a sleek highway mean the same thing to different people? Is investing in a storm drain a better alternative? Again, at this stage, it is best to take off our privileged glasses, and turn to local populations to show us the way.

A butterfly here, a twister there

When sound in concept, small changes can create a ripple impact across sectors. Nowhere has this been more evident than in radical approaches to tackle India’s mountain of garbage. A traditional approach to managing waste disposal has been segregating household waste, but does this really work? You may be segregating dry and wet waste in your home, but all of it probably ends up in a landfill, jumbled together. A better solution is to put waste back in the system, before it reaches the municipality dump. For instance, in many places, waste collectors and pig farmers have a synergy to collect leftover food from households to use as pig slop. Such innovative solutions can trigger cross-sectional changes.

Awards and recognition from platforms such as the Marico Innovation Foundation are an important step in building awareness about the ways social organisations are driving change, as well as spurring us to keep innovating. For example, till date, most people in Indian cities think the only way an organisation that “collects” cloth can “make a difference” is to give away materials as charity, but that is erroneous. Experience has shown that cloth can be put back into the ecosystem as currency, which pays for dignified labour. The idea is to generate jobs, not hand out freebies; to make conceptual rather than cosmetic changes.