Started in the US by an Indian scientist, Sehgal Foundation has transformed 700 villages 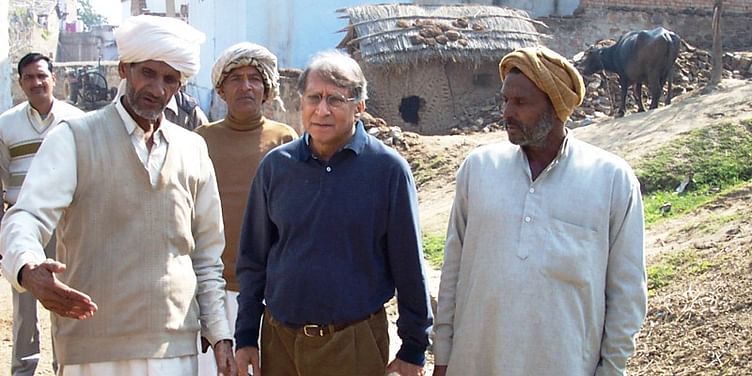 The foundation has a current impact space of 700 villages encompassing six districts across five states in India – it strives to bring a positive socio, economic and environmental change in rural areas.

During the India-Pakistan partition of 1947, Surinder was 13 years old and lost contact with his family, only to be miraculously united with them later in Amritsar. Despite financial difficulties at home, Surinder remained an astute student from school throughout college and went on to receive a doctorate in plant genetics from Harvard University in the US. Surinder settled in the US henceforth and devoted 24 years of his life as a crop scientist, entrepreneur, and seedsman. He has worked in companies such as Plant Genetic Systems, Hoechst AgrEvo, Dupont Pioneer, and as the Founder of Proagro Group in India, which he started alongside his wife in 1988. With the divestment of their business in 1998, Surinder decided to put to use this money to establish the Sehgal Foundation.

In India, the organisation’s work centres around water management, agricultural development, and building good rural governance. “All three are intertwined; directly and indirectly, they address social justice issues, most particularly the critical issue of gender equality. Empowering women is of critical importance. The best way to empower a community in great poverty is to empower women. Giving back to my country of origin has been my primary motive for establishing the foundation,” says Surinder.

With this, the Sehgal Foundation began work with a few villages in Haryana’s Nuh district and has now expanded to Bihar, Rajasthan, Telangana, and Andhra Pradesh.

Working with a team of specialists

Before taking up a project, the foundation makes sure to see if the impact is measurable. For this, they have set up an internal research department, which is a team of social scientists. This team is responsible for conducting impact assessments for which they use various tools like surveys, focussed group discussions, log-frame approach, and case studies.

Speaking about challenges in their way, Surinder says that water availability (and quality) has been the most pressing challenge when they started work in Nuh. “Groundwater salinity was so high that only 60 of more than 400 villages in Mewat had potable water. Women had to walk several kilometres each day to fetch water. Girls were kept home from school to help with this.” he says.

To tackle this, the foundation’s team of specialists helped in the construction of check dams and rainwater harvesting systems. According to Surinder, the results have improved health, sanitation, agriculture and have lifted a portion of stress from the lives of the residents of these villages. In these villages, a total of 53 check dams, 42 ponds, 52 nallah bunds and over 1,742 soak pits have been constructed. The water filter installed in these villages is a low-cost filter called the Jalkalp water filter, and can be used to store drinking water.

To promote agricultural development, the foundation takes steps to encourage sustainable farming practices. According to data on their website, 206 villages in the states of Rajasthan, Bihar and Haryana have been covered. The foundation team, which includes agricultural specialists and trained field staff, are working with farmers in Haryana and Rajasthan to come up with ways to address water scarcity. While the agricultural specialists stay on field for a period of over 15 days, the field staff moves from village to village, depending on the project. Along with this, Surinder adds, “Good-quality improved seed is critically important to crop yield. The Sehgal Foundation team is committed to finding improved varieties and hybrids that will give high crop yield.” He remarks that educating and engaging women farmers is an essential part of the process, which is being worked upon through the Krishi Chetna project – where work is done directly with women farmers from Alwar district in Rajasthan.

Making citizens responsible for their own development

The foundation believes that overcoming poverty is a matter of human rights; therefore, they introduced their self-governance programme, Sushasan Abhi in 2008. With a bevy of training and literacy camps, the rural citizens can learn about government policies and can expect their doubts and questions to be addressed through Sehgal Foundation’s community information and support centre, that can be contacted by the citizens. In the last two years, the call centre has received over 13,000 calls and over 40,000 residents have attended their legal literacy camps. Additionally, 4,500 panchayat and village level institution members have received training. This, Surinder adds, is an indicator that slowly, change is happening at the ground level.

The aim is to make citizens responsible for their own development. Under this programme more than 13,000 men and women have been trained to act as representatives of their communities and advocates of development. In 2013, the foundation noted the minimal participation of women in leadership roles in schools, as a result of which they created specific women leadership schools in Nuh district, Haryana, and in Samastipur, Bihar, to make sure that women had the opportunity to express their opinions and exchange ideas with one another. In a year, over 25-30 women leaders are chosen from each village. The schools promote “learning by doing” in order to encourage and equip rural women to engage in meaningful participation in grassroots governance. In the last 18-24 months, over 300 women have been trained.

Although no impact assessment has been done to study the effects of these steps, Surinder says that the result of these groups can be seen effectively since more girls are being allowed by their parents to stay in schools. They get married later and are better prepared for employment opportunities. Additionally, the foundation team has observed that the women who have completed the training go on to become more active citizen participants individually and within their village-level institutions (panchayats, school management committees, health and nutrition committees). Women take a greater role in decision-making within their families as well.

The good governance programme is further aided by the digital literacy and life skills training program, funded by Oracle – where schoolgoing children from Nuh are given hands on training to use computers and internet.

At present, the Sehgal Foundation is working on three research projects. The first is a longitudinal study aimed at capturing the enrollment pattern of students in Nuh. The basis of this research is the Right to Education (RTE) Act, which promises free education to all children between the ages 6 to 14. The foundation’s scoping study, their second active research project, is a partnership with United Nation’s ECOSOC to decipher the challenges faced by NGOs in India and their potential to drive change.

Its last active research project is set up in village Khohar of Rajasthan – the project aims to study the impact of the village’s check dams on the water supply, encompassing the suppliers and buyers of water.

The foundation wishes to carry forward its work of over two decades, furthering its reach with every village and state that it moves into.