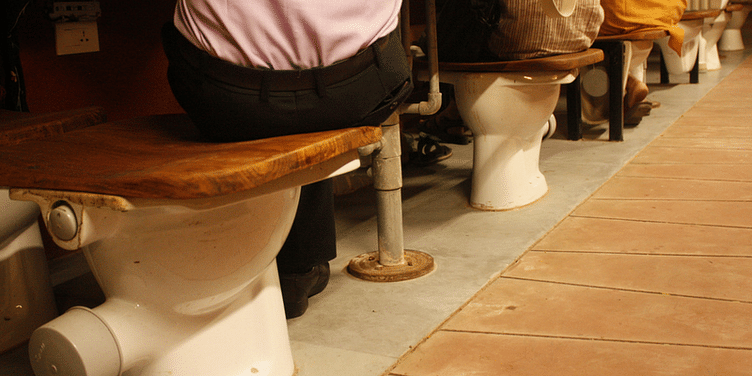 The Toilet Garden, a café built to champion the cause of sanitation, turns the pay-and-use concept on its head; use the loo here and you’re paid Rs 2.

Taiwan may have made toilet-themed cafes a thing with its Modern Toilet chain, but there’s a small café in Ahmedabad that’s using the idea to create awareness about sanitation and hygiene.

The Toilet Garden, located in a building adjacent to Sabarmati Ashram, is a café like no other. The greenery and cemented floors serve as the backdrop to the numerous commodes and latrines that invite you come plonk yourself and enjoy a cup of steaming hot coffee.

Displaying thought-provoking quotes like “Poverty is no bar to sanitation”, the Toilet Garden seems to bring alive the teachings of Mahatma Gandhi, who wanted to make sanitation a priority for India more than a century ago. Urging sanitation “for ministers and menials alike, Gandhi exhorted that sanitation is “more important than political independence” and that every lavatory must be “as clean as a drawing-room”.

The seeds for this cafe were laid 70 years ago during the struggle for India’s Independence. Ishwarbhai Patel, then 10 years old, was aghast when his teacher, Gopal Dada, spoke in class about open defecation, manual scavenging, and the way the community that cleaned night soil was treated by the public.

In the late 1950s, after Ishwarbhai graduated from college, he decided to follow his heart. He began to work to change the lives of thousands of sanitation workers and was soon recognised as 'Mr Toilet'. Along the way, he also sought for an end to the caste system and to allow the entry of “untouchables” into temples.

For over 50 years he travelled the length and breadth of the country, understanding the loopholes in the system and also spreading the message of sanitation. On December 26, 2010, he passed away at the age of 77, leaving behind a legacy that focuses on sanitation.

In a country where 600 million people defecate in the open, awareness about sanitation has still not made inroads everywhere. According to the most recent Swachhta Status Report of the National Sample Survey Office (NSSO), in 2015, more than half of the rural population (52.1 percent) still defecated in the open —a major public health and sanitation problem.

The aim of Prime Minister Narendra Modi's nationwide cleanliness drive is to clean up India by 2019, the year that marks the 150th anniversary of the birth of Gandhi. Even as the government rallies to build more toilets, end open defecation, and improve waste management, this little café is doing its bit.

The cafe is open twice a week, mainly for events organised by the ashram or the Safai Vidyalaya, says Madhusudhan, a volunteer at the Toilet Garden.

While the country fights its open defecation battle, here are some thought-provoking pictures of the Toilet Garden.