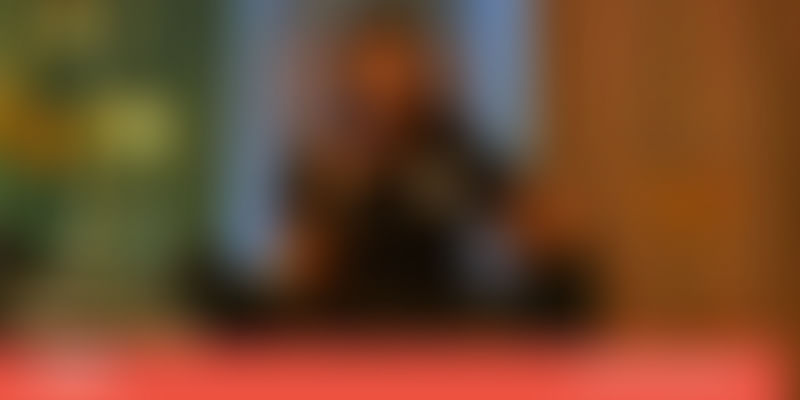 Here’s the heart-warming story of Chandni Khan, who grew up in the slums of Noida and through sheer perseverance is running her own NGO, Voice of Slum, to empower street children.

Hers is a story that must be told and a voice that must resonate so that children in the streets are taken care of and are equipped to lead better lives. It’s also a story of a past filled with suffering, a present full of hope and endurance, and a future that promises to be brighter than ever before.

Like most children from the slums, Chandni started earning at a very young age. “From the age of five, I used to travel along with my father to perform street magic shows, dance and play with snakes, even late at night. I also picked up rags during that time,” she recalls.

When her father met with an untimely death, she became responsible for her family and its survival. “At that time, I had to work under someone else, and earned a mere Rs 30 in a day.”

The struggles continued. “At the age of seven, I had shifted to rag picking. Verbal abuses and dog bites became a part of my daily routine and at the end, I ended up in jail over false accusations of stealing. I kept changing my job, from selling flowers to corn, I was doing it all. During one of these monotonous days, I got lucky and met a few NGO volunteers who were educating children from the slums. It was then I discovered my purpose and enrolled myself with Badhte Kadam,” she says.

At that time, Chandni did not even know how to hold a pencil. But she persevered and, after a month, was enrolled into the open school programme through which she received her education. She began her education at the age of 10 and is currently in Class 11.

This was the turning point for the young girl who would go onto make education of street children her mission in life.

“I participated in as many events as possible, encouraged community members, and even parents to let their kids study.

It was not long before when I met my first challenge – a couple of children were imprisoned after being accused of stealing. I remembered the horror of the day I was in prison and went to the police station to get the children released. It was one of my proud moments and it was then when my life took a turn for the better.”

She continued working for Badhte Kadam, helped them open new education centres, and connected more children to these centres. Soon, she was appointed District Secretary and later promoted to National Secretary.

It also opened up an opportunity for Chandni to work with a newspaper by and for slum kids – Balaknama, which now has a circulation of 5,000.

“My eagerness to learn encouraged me to become a reporter for Balaknama, documenting compelling stories of slum children. Eventually, we were able to start its English edition and my work was widely appreciated. This led me to the position of editor at Balaknama where I oversaw the complete structure and edit meetings of the newspaper. This is a part of my life which will always remain memorable because we did a range of stories around the lives of street children, issues of sexual abuse, child labour, police brutality, as well as stories of hope and positive change,” she says.

Chandni left Balaknama at 18 as they did not look after children who were under-aged.

The itch to make a difference by starting something on her own was strong and this led Chandni to start Voice of Slum.

“The NGO was set up to take a step towards those who need us, those who were under the age of 18 and weren’t accepted by NGOs. The aim is to provide street children with basic amenities such as health, education, and shelter. We do this with the help of our contributors, volunteers and mentors.”

“We connect with them through street plays to generate interest and build confidence. Then gradually, we start educating them; we work at skill development, personality training, leadership training, and self-defence,” she informs.

Chandni also puts her editorial skills to good use by editing Slum Post, a magazine and digital portal with contributions from slum children about the challenges they face. “Through Facebook, we have created a large network that has contributed to the growth of Voice of Slum. We want Slum Post to reach that network and we are hopeful that this may help us drive a change in society,” she says.

Social media has helped in this empowerment process. “I noticed that everyone was interacting on social media and adopting new technologies. I realised the importance of digital skills and taught myself to use Facebook, where I learnt I could connect with millions of users and create awareness about Voice of Slum and how are we trying to bring a change in the society,” she says.

She started off by making her own profile page and with the help of her friend and mentor, Dev Pratap Singh, learnt to use certain tools such as Facebook Live and 360 through which she showcased the stories of street children.

“I believe, with the use of social media, we can create awareness about welfare programmes and help disadvantaged sections of the society grow by making their stories visible through the social media platforms. If we educate our country, we empower them for a better tomorrow,” she adds.

Chandni’s mission continues and the future is full of optimistic plans. “In the future, we would like to include computers in our education programme and also teach children how the digital space is impacting our lives. We want to mainstream them, make them aware of their rights and provide them with equal opportunities.”

From being on the streets to helping those on the streets now, Chandni’s journey has an incredible one. She is 20 years old now, and with a will and determination as strong as hers, only the sky’s the limit as she aims for the stars.