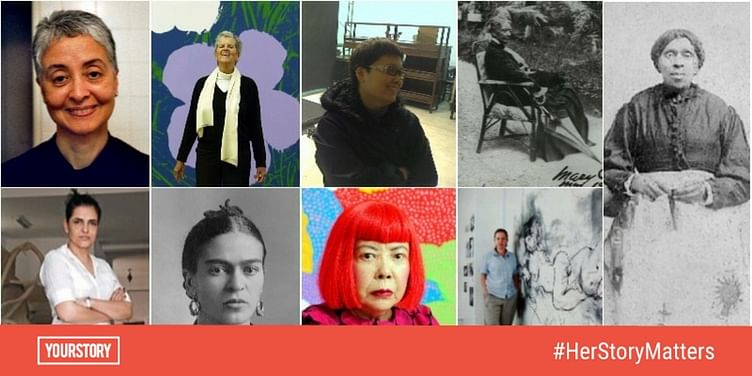 When it comes to the world of art, the difference between men and women appears to be stark. The work of women artists has not only been undervalued over the centuries but also overlooked. Women have faced multiple challenges in selling their art and getting commissions, and even travelling around to paint has been fraught with challenges.

However, undeterred, many women have broken stereotypes and created honest, real, and powerful art that has marked their presence for years to come.

Over the years, several other mediums of expression have emerged – TV, advertising, and photography, for instance – but they too have floundered this opportunity that women artists created to bring real and raw human behaviour, expressions, and stories to the forefront. With Women’s Day around the corner, we remember women artists across the centuries whose bold brush strokes painted the future of art.

In a world where the portrayal of women in art and media has always been “picture perfect”, Jenny Saville’s work stands out. She paints exaggerated and often strikingly grotesque nudes, making a powerful statement on the realism and diversity of human bodies. Often inherently flawed, deformed, or brutalized, Jenny’s work comes across as the antidote to sexist, male-dominated, and usually physically attractive portrayals of women.

Even before it makes a statement, Yayoi Kusama’s art is a testament to the healing power of art. Yayoi grew up with mental illness and abuse, but she used the resulting internal struggles, obsessions, and hallucinations to put out powerful works of art. One of Yayoi’s most famous works is the Infinity Net that depicted the repetitive patterns of her hallucinations. She also plays with polka dots or tiny points of lights in her elaborate installations. What started as a survival skill to make sense of her mental illness in the deeply patriarchal and discriminatory Japanese culture made Yayoi Kusama one of the strongest and most influential female figures in the global art scene.

Adrian Piper is a first-generation conceptual artist and analytic philosopher. Her first international exhibition was at the age of 20. Since then, Adrian’s artwork has transcended several traditional and contemporary media such as photo-text collage, pre-printed paper paintings, video and sculptural installations, digital art, and performance work. While her medium for expression may change, her focus has been on agency and individual identity in social and political contexts. Her work brings out social issues such as ostracism and racism.

Elaine Sturtevant, who often went simply by her last name Sturtevant, is best known for recreating iconic 20th-century artworks. She called them “Repetition” and through them explored the themes of authenticity and the creative process itself. She questioned the traditional ideas of originality and ownership. Her deliberately imprecise re-creations reveal underlying conceptual structures of iconic artworks. In 2000, Elaine turned her attention to the post-internet age. She used film, video, advertising, and internet imagery to depict reflections of our new visually saturated culture. She stopped making art for a decade when she felt her peers and critics misunderstood her.

Frida Kahlo, a Mexican self-portrait artist, is widely recognized as a feminist icon. Her work depicted female experience and form in bold colours. At a time when the art scene was largely white and male, Frida brought attention to Mexico through her use of colours and to women through the forms she painted. One of Frida’s most common themes is life experiences. Her physical and emotional pain after her accident and during the rocky relationship with her husband found space on her canvases, in over 200 paintings, sketches, and drawings.

Mary Cassatt was one of the most influential impressionist artists of her time. The general themes of her work included the portrayal of women and children in everyday moments. Mary is credited with bringing the female form to art through her depictions and evocations of women’s inner lives like few did in the 19th century. She was also a part of the feminist phase that occurred in the 1840s which gave women access to newly-coed colleges and universities. In her work, she depicted the “New Woman”, a feminist ideal that emerged in the 19th century. The depiction was of women who could hold their own in society and the workplace.

Harriet Powers, an African-American born into slavery, is best known for the quilts she made after the Civil War. One of the most famous works of applique and piecework, the cotton quilts depicted Biblical scenes and celestial phenomena. They are known for their bold depictions and the use of applique for their storytelling and documentation of history. Most importantly, Harriet’s work brought forward African and African-American influences and depicted the culture and artistic practices prevalent in West Africa at the time. This was at a time when African history was either undocumented or unheard of.

Bharti Kher is credited with being one of India’s most prominent contemporary artists. She is a sculptor, painter, and installation artist and her work is largely an exploration of objects to evoke a psychological experience. For example, she uses traditional and sperm-shaped bindis to symbolize the intersection of religion, domesticity, commodity, and aesthetic beauty. Bharti explores cultural misinterpretations and social codes through her artworks. One of the most common themes in her work is the link between tradition and modernity from a female perspective, and the shape-shifting bindi is at the centre of this depiction.

Lin Tianmiao is one of the first and very few female Chinese artists to have achieved international recognition. She is best known for her thread windings around everyday objects and large-scale installations. Lin’s work relentlessly focuses on a woman’s – especially her own – social role, and the idea of individual identity in a social context. Apart from her famous installations, Lin also creates work in sculpting, photography, video, and several other visual art forms.

Over hundreds of years and many generations, these influential artists have pushed boundaries – of art as a medium of expression and also of the place of women in the world of art. Apart from their inspiring talent, the courage to push those boundaries is reason enough to celebrate them, as the world has over the years.