Meet the man who is empowering the specially abled with technology 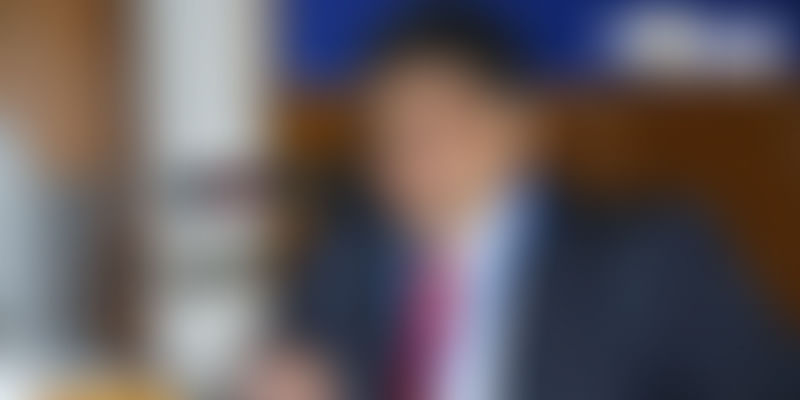 He contracted polio at the age of four, but Pranav Desai decided to use his experience – personal and corporate – to empower the specially abled through his organisation, the Voice of Specially Abled People (VoSAP).

The 2011 census reveals that India is home to 2.68 crore people with disability, be it physical or mental. While people with disabilities battle multiple challenges, be it people’s attitudes, acceptance and inclusion, lack of access to good quality education and employment keep many from being financially independent.

It was to mitigate this problem that Pranav Desai founded the Voice of Specially Abled People (VoSAP), a global advocacy organisation that promotes empowerment of specially abled people through accessibility, education, and employment.

Citing various examples of specially abled people doing excellent work across sectors like hospitality, engineering, logistics, and BPOs, among others, he encourages parents, teachers, and employers to focus on the tremendous potential they possess.

Beating polio to reach to the top

Born in Ahmedabad to a middle-class family in the year 1969, Pranav was affected by polio at the age of four. By the time he recovered, both his legs were crippled; he needed braces and a cane to walk.

Pranav’s father worked as an engineer with the Gujarat Government, and his mother was a homemaker. One of the first struggles he faced was to get admitted to and attend a regular school. This was partly because of the resistance shown by school authorities to cater to his physical needs, and partly due to his parents’ fear and apprehensions.

Speaking to YourStory, Pranav said, “Fortunately, I got admission on a trial basis, with the help of family members, for six months in Class 1 on specific conditions. I took the challenge, topped the class, and began enjoying the benefits of inclusive education.”

Despite mobility and accessibility still being persistent issues, Pranav overcame day-to-day hardships to consistently perform well throughout schooling. He went on to complete his engineering in electronics and communication, followed by an MBA in sales and marketing from Gujarat University.

Pranav’s career started with one of India’s biggest textile manufacturers, Arvind Mills Limited, as a management trainee in the year 1993. With his strong will and determination, he continued climbing the ladder, and is now the Vice President of NTT Data in the US.

It was while he was working for the multinational giant NTT Data that he founded VoSAP in the year 2015.

Pranav said, “My experiences as a specially abled person in India and in US were poles apart, and I became inspired to do my part in changing the quality of life of the seven million people in India.”

Pranav, who has also been acting as the Advisor to Department of Empowerment of People with Disability in Ministry of Social Justice and Empowerment, Government of India, has brought about monumental changes with his work.

Pranav developed Vision 2020 in January 2014, with a set of 12 goals that will enable creation of a barrier-free and inclusive India for specially abled people by year 2020. He conceptualised and designed the Accessible India Campaign in December 2015 to make Indian infrastructure and technological solutions accessible to specially abled people. He closely worked with the Indian Government to bring about the Rights of People with Disabilities (RoPwD) Act, 2016.

Speaking about how he juggled multiple roles simultaneously, Pranav said, “At times, it does require stretching for long hours. However, the journey is exciting and rewarding. Frankly, they both complement each other. The corporate experience I gain from multinational giants shapes my perspective. It helps to look at disability very differently, which enables easy-connect with top leadership layer.”

Pranav added, “I started using my strengths and resources to mobilise leaders. I started with Prime Minister Narendra Modi, who was the Chief Minister of Gujarat at the time, to pay attention to the needs of specially abled people and work towards more stringent implementation of what was already required by Indian law.”

Pranav’s idea was warmly welcomed by the former Gujarat CM, and work soon began with changes being made in budgetary allocations at the state level. The interactions between the two continued, which eventually resulted in the passage of the much-needed RoPwD Act 2016.

Pranav is grateful to the volunteers closely working with VoSAP to bring about a difference in the society. Over 3,000 volunteers are associated with his work, and he feels that each one of them has helped him tremendously with their professional outlook, perspective, and people skills.

To accomplish its goal of inclusivity, VoSAP’s activities are targeting five verticals, of which one vertical focuses on sensitisation of the leadership layer- from corporate, to social organisations and government officials - the top-down approach. Pranav understands that leaders across sectors have the responsibility as well as the authority to percolate change through law, policy, and resource allocation.

Simultaneously, Pranav uses the bottom-up approach by focusing on volunteer engagement. He wants to ensure that different transformations occur, in parallel; these include mass awareness and mindset evolution. One of the campaigns launched by VoSAP, the Youth Connect programme, encourages thousands of colleges to start helping the specially abled.

“Disability as a subject has been avoided in Indian society, where any association with disability was considered shameful. Making disability mainstream, and creating acceptance towards specially abled people is a Herculean Transformation Endeavour and it cannot happen without everyone’s participation,” Pranav said.

“We promote the concept of Individual Social Responsibility (ISR) towards specially-abled people, that every citizen of India - leader or common person- can discharge and embrace, which will hopefully create an inclusive Indian society.”

According to WHO, the worldwide population of specially-abled people is over 1 billion, with an estimated global market of disability-related products pegged at US$ 60 billion by the year 2020. Over 160 countries have signed the UN treaty of 2006 to ratify provisions for independent living of specially abled people. This has further boosted the huge, growing market with a sustained demand for affordable products and services. Globally, it is a historic time to mainstream specially abled people with technology.

On the topic of assistive technology for the specially abled, Pranav said, “In the US, we see a huge market for products for specially abled people. However, these products are too expensive for the Indian market. This is an opportunity for both US and India to collaborate for technology transfer, joint ventures, and distribution rights, among others”

Pranav added, “The demand for affordable assistive technology devices is not met because of inadequate information, financial constraints, infrastructure, and systems to support. In India, we have dearth of quality products, from simple walkers to daily aides for living, to 3D printed devices. Innovators and entrepreneurs should look at it as a pool of possibilities to cater to global market demand with innovative, affordable solutions.”

With a goal to create mass movement and awareness, Pranav has also built an online platform to provide solutions. The technology - VoSAP mobile app with GPS and social media integration - helps make a local and global impact.

The VoSAP mobile app allows volunteers to capture building accessibility with a photograph. The app updates that information using GPS on the map. This helps people in wheelchairs find places they can visit based on accessibility ratings and comments.

Pranav says, “We believe social transformation can be achieved with such innovative solutions using mobile technology.”

Pranav has been blessed with constant support from his family.

“My mother took extreme care to ensure I got everything I needed. My father believed in me and supported every decision, which gave me the much-needed confidence. My wife, for the last 25 years, has inspired me, prepared me to accept my role, and purpose of my life - empowerment of specially abled people.”

Pranav is now looking at the future; he aims to include Young India, who he thinks will easily adopt inclusive thoughts and act to bring about the transformation.

He says, “As 65 percent of the Indian population is young, tech-savvy, globally connected, well informed and more open minded to global ideas for a better world for all, we see tremendous possibility of accelerated social transformation.”

When asked to give a message to the young generation, Pranav says,

“Become the ‘changemaker’ in your community by joining VoSAP’s team of volunteers. Be compassionate, think of others, and do what you can.”