Facing govt inaction, tribal farmers in Rajasthan harvest bamboo on their own 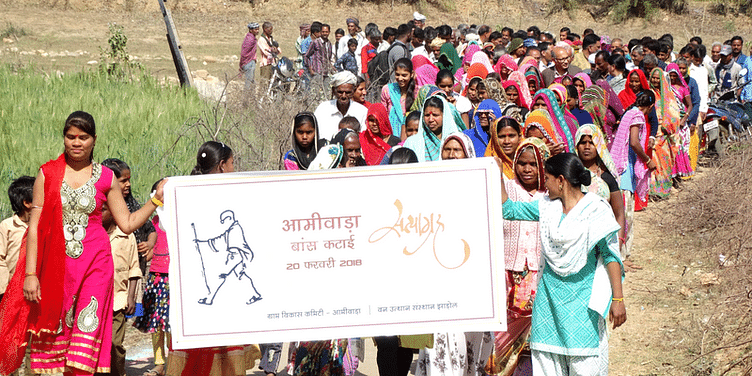 The 'Satyagraha movement', as they call it, is not only a story of bamboo harvest but one of poor peasants showing the way of self-governance and taking on moral responsibility of protecting their commons.

In the nondescript Rajasthan Amivada village, in Jhadol block in Udaipur, marginal tribal farmers created history by harvesting bamboo grass in the last week of February. The importance of this otherwise non-eventful regular farming procedure lies in the fact that they planted the bamboo themselves in abandoned and degraded pasture land, as a collective community, without any help from the government.

“This initiative by the villagers signifies a peaceful assertion of their responsibility over their resources, and products such as bamboo, which has huge economic significance for

Once a degraded rocky and barren space, Amivada is now a forest of bamboos. This transformation from barren to greenland is a result of 15 years of hard work of the villagers.

Since 2003, the Amivada Gram Samuh has protected, managed and developed 16 hectares of pasture land through the collective efforts by the village community. In the barren and degraded lands, the tribal community planted bamboo as a chief crop for primarily two reasons— high investment returns and for personal usage.

“We took this step as bamboo is suitable for the area, as well as for economic returns that bamboo grass offers,” Devi Lal, President of Village Gram Samuh, says.

By 2016, these bamboo plants matured and were ready to be harvested. The bamboo could either be used by villagers themselves or could be sold, which could essentially supplement meagre earnings. The other livelihood opportunities available in the village is farming and livestock rearing.

If it was not harvested on time, there would have been a chance of loss in the productivity of bamboo by rotting and decay. There was also the risk of theft, Devi Lal adds.

According to the Panchayats (Extension to the Scheduled Areas) Act, 1996, bamboo harvesting can be done only by Gram Sabhas under the supervision of the Forest Department.

The farmers from the Amivada village made repeated requests for two years to no avail. But instead of protesting, they decided to undertake the activity of harvesting themselves at their own expense. Carried out under the leadership of local development platforms, like Van Utthan Sansthan, the villagers launched a simultaneous bamboo harvesting drive in all these sites, with 2,000 people participating.

Calling this harvest period as a Satyagraha movement Tara Chand adds, “As it happened that when we decided to go ahead with our Satyagraha to harvest bamboo, an official clarification was received from the government just a day before we started this initiative.”

As a symbolic gesture, 14 other villages from four blocks, participated in this initiative in their respective villages by harvesting bamboo.

Forty-year-old farmer Sapna Kumar says, “This is not a protest against the government. We call it a Satyagraha because it is about the truth that governance of commons by the community can go a long way in transforming the mindsets of the people. Through this movement, a precedence for such community-led initiatives has been set.”

Today, the harvest is worth approximately Rs 4 lakh. The money generated will be used for developing the boundary wall of the pastures, and for building irrigation facilities. Otherwise, the average income of a farmer, by harvesting wheat and a few vegetables, in this region is a mere Rs 2,000 per month.