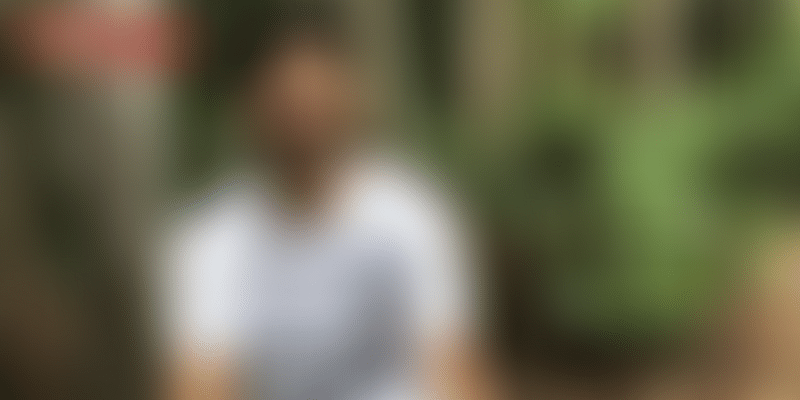 Divanshu Kumar’s Involve engages students in higher classes to teach younger ones in schools with children from low-income families.

At a time when rote learning and academic-based examination continue to dominate the Indian school system, a 21-year-old student from IIT Madras is on a mission to change the way knowledge is imparted.

Using the peer-teaching model, which has the Harvard University’s stamp of approval, Divanshu Kumar hopes to improve the learning ability of students through his startup, Involve.

“Most of the world believes that by putting more qualified teachers in the classrooms, we can improve the quality of learning and have better results. And while this is true, it fails to address one very important need. The capability building of students! And this will not be possible until the students themselves realise the importance of learning and are motivated from within,” he says.

Involve’s peer teaching method involves a nine-month fellowship where students from higher grades, like from Class VIII, can teach and mentor their juniors. By getting the learned students and the learners together in a classroom, Involve aims to create a school ecosystem that defines a student’s potential not merely in terms of examinations, but through their overall academic and personal excellence.

As a young student raised in Gaya in Bihar, Divanshu knew the value of quality education. Due to financial constraints, he studied in a low-budget private school till Class VIII. “Sometimes, for almost three months we didn’t have a subject teacher,” he recalls.

Hence even after joining IIT Madras, where he pursues Mechanical Engineering and Robotics, the cause of education was something Divanshu always aspired to work towards. This drove him to join the Avanti programme, a fellowship programme where IIT and NIIT students come together broadening access to top-quality tertiary education to meritorious students from low-income families.

In his second year, Divanshu was promoted to mentor manager, where he was tasked to handle a team of 25 college students who mentored Class-XI students for competitive exams. To help the students mitigate challenges and gain a better understanding of the curriculum, he advocated Class XII help the eleventh-graders.

“I realised that if this concept could be taken to schools where we could help junior students learn better from seniors, we can make the learners academically strong while empowering the seniors with better understanding,” he adds.

Hence, in 2016, he along with his friends and co-founders Awnish Raj and Samyak Jain, pitched their model to Sonia Luthra, the principal of ASN Senior Secondary School, Delhi, where Divanshu studied earlier. This marked the first pilot project for Involve, where during summer vacations select senior students were trained and coached to teach their juniors, and help them understand the chapters through activities and games.

Divanshu and his team were in their late teens at that time.

“In the pilot we had a 20 percent improvement in academic scores of learners in just six weeks. After this project was over I knew I wanted to become an entrepreneur— help solve a complex problem that not everyone would want to solve and build a team of people who work with the same vision to solve that challenge,” Divanshu says.

Involve aims to create a revolution in the school education system through after-school ‘peer teaching’ programme in the form of Young Student Leadership fellowship.

Involve trains and mentors senior school students in their formative years of age 12 to 16 to teach their juniors by partnering with low-income private schools to provide after-school academic help to the students at a low cost.

“More than 47 percent of youth today are unemployable in India today. That’s more than 150 million people. And if we dig deeper into the reasons, one of the things that stand out is the lack of life skills. Today, education is only about scoring marks, while the real purpose of education is not that,” Divanshu points out.

Involve actively works with senior school students and helps them build confidence through a three-step model— communication, problem-solving and planning, and execution.

The students are encouraged to move beyond Involve’s set curriculum and training module and come up with their own methods to help younger students understand math problems better. For instance, to teach Class-IV students the chapter ‘Patterns' in Mathematics, a Class VIII student leader made the young children stand in various spots to help them visualise the patterns, like the Fibonacci series, physically. Another student leader from a Kendriya Vidyalaya in Chennai developed a snakes and ladder game to help students learn addition and subtraction.

The learners - students from Class IV to VIII - that Involve engages with are slow learners or any student who wants to improve academically. The team firmly believes that one of the major reasons behind that is a lack of motivation.

“Hence we developed the ‘Motivation’ tool at the beginning of each chapter where we inform the students why they are learning this topic and why the subject is important,” Divanshu explains.

On the impact the Involve team and the student teachers have brought about, Mrs Vedapati, a coordinator with Kendriya Vidyalaya in Chennai says, “They bring a methodological approach to and fierce passion for learning. I have seen a transformation within 20 days itself where the peer educators have been transformed into leaders in the classrooms; the unwilling learners have become joyful learners.”

The biggest challenge for Divanshu and his team is overcoming the scepticism surrounding the youngsters’ capability to bring about change. People initially failed to take them seriously.

By by mid-2017, a year after their first pilot project, Involve started to work with budget-friendly schools in Chennai. The seed money used was the amount won by Divanshu, Awnish and Samyak in various college festivals, or their earnings from taking private tuition for school students. However, the team ran out of money by December.

“I knew that we may be over within a month and being in a position where you don't have enough to pay salaries was a bad thing. I was just 20 and I had my share of sleepless nights,” Divanshu recalls.

However, he refused to give up. He applied for funding and mentorship from Mantra4Change where the co-founder, Khusboo Awasti, gave Involve support for three months. Nirmaan, a pre-incubation cell set up by IIT Madras, helped Involve with product-related expenses.

Later, Divanshu managed to raise Rs 6 lakh in a month through a crowdfunding campaign. In May, the team was selected for non-profit incubator N/Core’s ‘Cohort of Top 8 non-profits in India’, which earned them a seed grant of Rs 10 lakh. Involve is one of the 16 global social entrepreneurs as part of the ‘Young Social Entrepreneurs Program 2018’, headed by the Singapore International Foundation.

Currently, the student leader-to-learner ratio at Involve is 1:4. Further, one team member of Involve is engaged on a full-time basis with the school to ensure that the learning module is followed efficiently and to check cases of conflict, bullying and aggressive behaviour among students.

The team has partnered with Svatantra Trust, which runs Vidyadaan schools to explore possible teaching programmes for teachers as well.

While other organisations like WarHorse, Entercon.in, Apni Shala Foundation, Dream A Dream, Cuemath, and Ignitor Learning also work in the similar space to help students from low-income schools gain access to education and learning, Divanshu says that no one has designed a peer-teaching model.

“One thing that I have come to realise is that a challenge as big as education can’t be solved through competition, rather only by collaboration. We need to collaborate, thereby creating a synergy of people present in different cities and villages of India. If I talk in business terms, there has been no organisation in my knowledge that has the education market share of more than five percent. So, very clearly, we have just started scratching the surface, may be not even that,” he says.

Involve is open to partnership and the team has hopes to put up their lesson plans and curriculums online to help other organisations replicate their model.