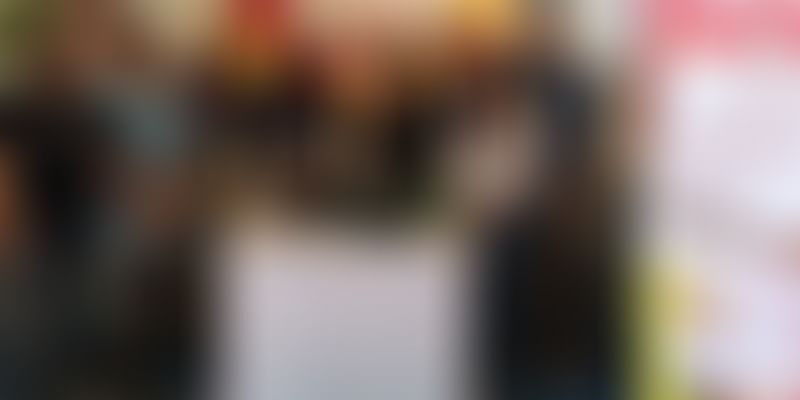 We all want to lose that five or 10 kg; we make several attempts, join expensive gyms and install multiple fitness and food tracking apps on our phones. However, despite our best efforts, we lose track after a few weeks due to the complexity of food logging apps.

One of the biggest challenges people face while logging in their meal details in an app is measuring the amount of food consumed. Mumbai-based Tech30 startup Bon Happetee aims to solve this by allowing users to calculate food in easy measures.

Launched in July 2017, the platform went commercial in March this year. "We try to solve the measuring problem by calculating food in human measures - we measure idli in pieces and almonds as a handful and not ounces," says founder Rishi Bhojnagarwala.

Rishi, an ex-employee of Zee Networks, lost 20 kg weight over two years by monitoring what he ate and when.“I used to play squash and after I gained weight, my game was affected and that motivated me to lose weight," he says.

Coming from a media background, Rishi wanted to tell his story to the world. "I could have written a book or made a film on it," he says. However, realising not all weight-loss stories are the same and that "everyone has different food habits and health issues, I could never write a general story for everyone wanting to lose weight," he says.

That’s when he came up with the idea of Bon Happetee.

"We named it Bon Happetee since all our ideas and meets essentially revolved around food," says founder and friend Pramit Mehta who first met Rishi over biryani and pav bhaji.

Bon Happetee has a team of 10 people - the two founders, three dieticians and five tech experts.

Before starting Bon Happetee, Rishi worked as a content producer at Zee Network while Pramit, an IIT Bombay graduate, was a senior research associate at KPIT Technologies. Pramit helps with the 'maths' part of the platform. Nutritionists Hetal Pal, Hitanshi Gaba, Shilpa Dhar and Monika Surya make up the core team of Bon Happetee.

According to the founders, Bon Happetee is a data collection platform. Starting with 700 food items manually created by the founders, the platform now lists more than 15,000 food items, all collected from user entered details.

When a user signs up, basic details need to be provided - whether the user wants to lose or gain weight, or simply maintain their weight; their food preferences; their food culture (Punjabi, Bengali, French, etc); basics like height and weight and their lifestyle.

The platform then generates the ideal BMI for each user. Before having a meal, the user needs to key in what they are about to consume and the platform rates the meal in a range of one to 10 (10 being the best meal). Based on the rating, the app suggests what else the user must add or reduce to make it wholesome. The platform sets a target calorie consumption for every individual user.

"At the end of the day, we want the user to make an informed decision," says Rishi. The company claims to have helped 6,000 people lose weight.

"We help people lose weight without having them to compromise on their eating habits," says 34-year-oldPramit.

Not just a food log-book

The platform has been developed to not just be a food log book, but also to identify behavioural aspects. If a user does not enter the details for three days, the app identifies if it was a weekend. Similarly, the app also advises the user to walk a certain number of steps if they did not follow instructions provided by the platform.

In future, the app also plans to provide incentives. "We are planning to start an online store soon. We would then provide incentives like, if a person walks a certain number of steps, they would get discounts at our store," says Rishi. The app also provides chat-facilities for its users, to share their meals and weight loss stories.

Bon Happetee’s app has 1.1 lakh downloads since inception and 20,000 users have contributed to 2 million meals in the app. The company has seen a total investment of Rs 2.4 crore from the founders, their friends and family, as well as angel investors, and claims 5,000 users have lost an average of five kg using the free version of the app and 1,000 people have lost 11 kg.

The company has also partnered with food companies and is also planning to partner with pharmaceutical and nutraceutical companies. Bon Happetee has also associated with newspaper Dainik Bhaskar, which has a fitness app powered by Bon Happetee.

Revenues are generated from users opting for premium services, partnerships with pharmaceutical and nutraceutical companies, and from Dainik Bhaskar's tie-up.

The founders claim the platform has 5,000 weekly active users and 4,000 Dainik Bhaskar users. The app records up to 3000 organic sign-ups every month.

According to India Brand Equity Foundation, the healthcare market is expected to record a CAGR of 16.5 percent between 2008 and 2020. The industry is expected to touch $280 billion by 2020. According to nutraceuticals world, the wellness and nutrition industry saw a 22 percent increase in transaction activity in the first half of 2017.

While there are several apps available in the market such as MyFitnessPal, Cron-o-meter and SparkPeople, that function as food logging diaries, what sets Bon Happetee apart is its huge database. The platform lists food items for every Indian palette - from Bengali to South-Indian. Besides that, Bon Happetee provides food plans for different medical conditions and diet charts for different body types.

While recently-launched cure.fit has similar plans, Bon Happetee is much cheaper.

Bon Happetee is planning to set up an online store in the next three to six months, which will stock food items curated by the platform's nutritionists. The online store will have food and wearables.

The founders are also approaching hospitals and health care centres for tie-ups. "Our goal is not to deprive you of your food of choice. We let you eat your favourite sandwich while asking you to make a few changes - like adding a fruit or reducing a slice, to make your meal wholesome," says Pramit.