Best of Techie Tuesdays: 5 tech bosses we loved in 2018 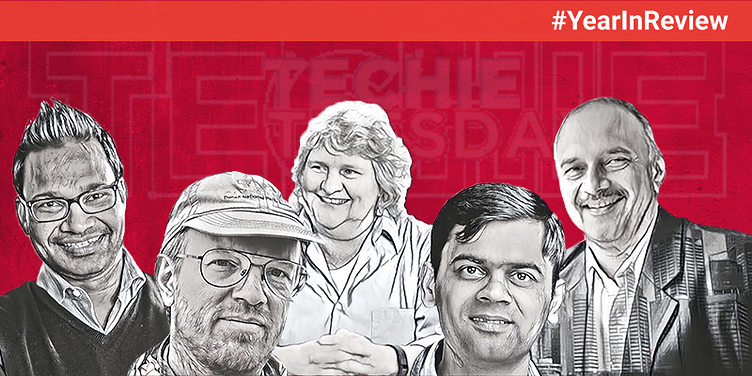 Here are among the top 5 Indian and global techies we spoke to this year, and featured in our weekly Techie Tuesdays column.

The end of the year is always a great time to look back and reflect on how you spent the last 11 months. At YourStory, it is no different. Each week, we introduced you to and gave you insights about the people leading the digital disruption across sectors in our weekly column Techie Tuesdays.

And we did garner a lot of love from every one of you. Today, we bring to you the five brightest stars featured in this column - in one long grateful list. Here’s the best of Techie Tuesdays of 2018.

Jyoti Bansal has inspired millions of aspiring entrepreneurs. He is the founder of AppDynamics - the applications and business performance monitoring software that was acquired by Cisco in 2017 for $3.7 billion, just a day before its IPO.

While the entrepreneur agrees that the sale wasn’t an easy decision, he is proud of the fact that more than 400 AppDynamics employees made more than a million dollars after the acquisition. Born and raised in a small town in Rajasthan, Jyoti was among the top 100 rank holders in JEE and joined IIT Delhi. When he did not get a top job in campus placements, Jyoti started his career with a startup called Applion Networks.

Though it was a cool startup, the company couldn't crack the sales and Jyoti learnt that coding and building a technology that no one buys is not fun.

“Every stage is like a video game. When you're playing level one, it takes you some time to figure it out. Then you go to level two and realise that level one was easy. Then you figure out level two and move on to level three, and so on,” says Jyoti.

“When I was young, I always knew I'd get a PhD in something, just didn't know what.” And she did.

That’s Rebecca Parsons for you. The CTO of ThoughtWorks was introduced to programming in ninth grade by her algebra teacher. That began a journey that was both exciting and thrilling - with PL-1.

Beginning her career at Caterpillar, Rebecca programmed in PDP-11 assembly language while working on warehouse automation. She then moved to Dallas to work for Mastec Semiconductors and learnt the C programming language, VMS operating system and UNIX.

“At one point in time, I was working on 11 different hardware platforms with seven different operating systems,” she says.

After her PhD, Rebecca joined DECUS (Digital Equipment Computer Users' Society) to work on AI SIG because of her interest in AI. But, when a friend asked her to join ThoughtWorks, it seemed like a natural progression. Her desire to learn and the fact that she could go to different projects, work on different technologies/applications across different domains appealed to her.

“Technology is quite powerful. I find it fascinating. With respect to technology, I imagine myself sitting on the fence between theory and practice,” says Rebecca.

How does a small-town boy grow up to be the CTO of a multinational? He dreams big and then sets about to achieve that dream – that’s exactly what Prashant did.

The CTO of Zomato hails from a village in Uttar Pradesh and was educated in Hindi medium. Maths and science were strong favourites, but it was only after Class XII that Prashant heard of IIT-JEE when he came across Brilliant Tutorials’ study material.

“I came from an entirely different world. I had never studied in English let alone talk in English. I entered college to find all the books in English and people speaking English."

He had a lot of catching up to do and he did! He began his career at Newgen Software, then moved to CSC, Snapdeal, and started his own ecommerce platform Kartmagic. But when that failed, he went back to Snapdeal.

When he met Deepinder Goyal while still at Snapdeal, Prashant told him that the company wasn't leveraging AI and ML much and there was scope to structure some of the technology processes further. His vision was clear and he joined Zomato. The rest, as they say, is history. When asked about what’s technology for him, he says, “Technology is something that helps humanity progress.”

“I do what I do and I just stick to it.” - Anand Deshpande lives by this mantra.

Possibly the oldest in our list of top Techie Tuesdays, but this 56-year-old is going stronger than your average Joe. Over the last 28 years that his company Persistent Systems has been in existence, Anand’s role has constantly evolved and his excitement is unparalleled.

Born in Akola, Maharashtra, Anand and was raised in the BHEL township in Bhopal and was a serious, studious child. His grades and IIT-JEE took him to IIT Kharagpur and he started with Aerospace Engineering. Two years in, Anand changed his stream to Computer Science.

Anand did his masters at Indiana University and in his third semester, cleared the PhD qualifying exam. After completing his PhD, he began working at HP but only stayed for six months. That was in 1989.

In May 1990, Persistent Systems was founded by Anand’s parents in Pune while he was still in the US. “We called it Persistent Systems because we were working on systems that are persistent, which is databases,” he says. While it took a while to get into the groove, the company stands tall today and even invests in startups through its $10 million venture capital fund.

Meet Bretwood Higman whose research and coding can help save the world from disasters such as tsunamis. Growing up in Seldovia, Alaska, Bretwood always felt like a little Mowgli in all the wilderness.

He was one geeky teen leading hikes into the wild. At 14, he took to guiding as a volunteer, which became a significant part of his life. Along with a friend, Bretwood built a game called 'Beyond Sensor Range' in 1996. He designed the game roles and key programmes and made all the graphics. Unfortunately, the company that printed it went bankrupt immediately.

Geology happened by accident. When Bretwood joined college to pursue Physics, he took Maths out of interest. But, it was his roommate's father, a geologist, who suggested he also take a Geology class.

In 2002, he went to Nicaragua to study the tsunami of 1992. Bretwood was a few years into his PhD when the giant tsunami and earthquake hit the Indian Ocean in 2004. Soon, he started corresponding with different scientists and two weeks later, he was in Sri Lanka documenting the geological evidence. Eventually, he went to Sumatra and in 2006, to Thailand.

Today, he uses Python to manage ship traffic in Canada and British Columbia.

“I want to be a part of attempting to solve that problem. It's very possible to fail but that's not the reason not to try. I want to dive into this problem without thinking about fatalism and getting depressing pondering upon the future. Because if we all fail, then I get the front row seat of the failure and that will be pretty interesting,” says Bretwood.