Sharing the load: My mother raised me to be an equal, says actor Rajkummar Rao 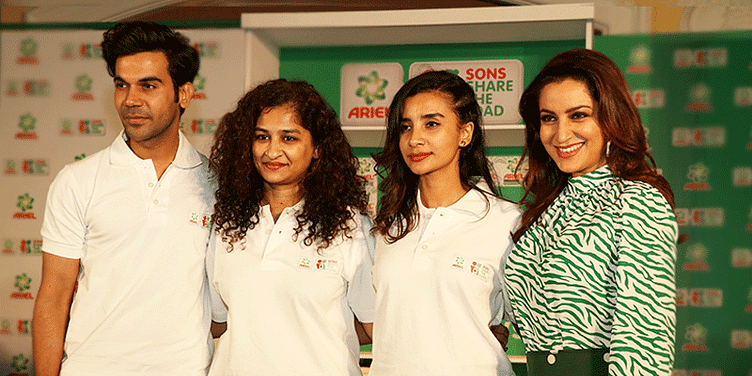 Women need support to succeed. Actor Rajkummar Rao and director Gauri Shinde join hands with Ariel to spread the important message that men should share the load at home.

A poignant image of men and women at the starting line of a race has been making the rounds recently. It depicts the men having a clear path ahead, while women have to contend with a barrage of obstacles, including household chores.

While the image has taken our social media feed and WhatsApp by storm, and received much appreciation for effectively capturing reality, the challenge lies in ensuring the path for women to succeed gets cleared.

One of the ways of ensuring women get a fair start is to have men shoulder half the household responsibilities. Since women carry the lion’s share of household responsibilities, it is difficult for them to manage everything. Being a woman is tantamount to being a great multitasker, but we need to acknowledge how that is wreaking havoc on their mental and physical health. It is time things change so that women can move forward, and pursue their careers without having to worry about kids, their homework, laundry, cooking, and a hundred other things that need attention at home.

Adulting is not for women alone

Are we teaching our sons what we are teaching our daughters? This is the question Ariel India, the detergent company, has raised. With its long-running campaign #ShareTheLoad, it is showing ways in which men can be more involved and help their women out at home.

Gauri, who has also directed the film for Ariel this year, shared that a progressive future is one where both men and women share the load. "With this film, we have underlined the role for this generation’s mothers in raising their sons like they have been raising their daughters,” she added.

Rajkummar Rao on sharing the load

Sharing from his own experience, actor Rajkummar Rao pointed out that an equal setting at home set the right example for him and, as a result, he "can stand proudly as an example” for other men. He added, “And this has always driven me to ensure that my relationship with Patralekha is that of equals, inside the home and outside of it!”

Speaking to HerStory, he said,

I am a firm believer in equality, be it my personal life or professional. For me, it’s all about sharing the responsibilities with your partner. If I ever get to witness that there is any kind of disparity at home or on our sets, I make sure that we deal with it in the best way possible but, luckily, I had a great working environment on most of my films sets.

Patralekha, Rajkummar Rao’s partner, shared how Raj truly demonstrates what equal partners mean. But she hit the home run when she said, "Partners like Raj shouldn’t be exceptions, they should be the norm.”

Speaking from her own experience, Sonali said, “I have been working for two decades and it has been possible because of the support I have received at home.”

For women to succeed, Sonali added that they need support on three fronts - at home, at work, and in society at large. However, she is positive that in multiple Indias that exist within India, young and urban Indians will be seeing change faster.

But how does one reach everyone? Sonali shared an anecdote about how the video Ariel has created helped a woman in need of help. She had shared it with her sister since she was unable to ask her family for support, but the video did the trick. “Sometimes women hesitate to speak up or ask for support directly, but through a third-party video or a message they can have the message delivered, and where there are chances of the message being accepted is high.”

She added, “If this generation shares the load then the next generation will be different, and we will see a change.”