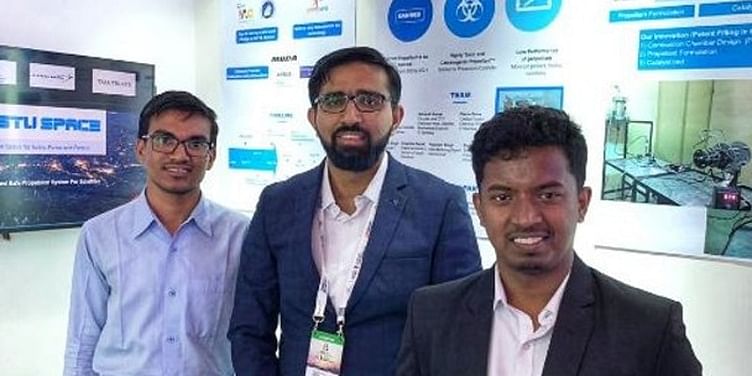 Founded by Tushar Jadhav and Ashtesh Kumar, Manastu Space has developed a green satellite propulsion system. The spacetech startup is helping propel satellites with a system that is 25 percent more powerful and 60 percent cheaper than conventional chemical propulsion systems.

India is now witnessing a space revolution. It has showcased its prowess in the last few years with successful space missions and innovations, and startups want a slice of the space pie too. Most of them cater to private sectors across the globe to either put their satellites in orbit or manufacture one for them. And as the sector is maturing world over, other concerns are being paid more attention to, such as greener and safer solutions. This is where Mumbai- and Bengaluru-based spacetech startup Manastu Space comes in.

Over 4,000 small satellites are in orbit, and most of them are for earth observatories, which generate high-quality data and images used to study the earth’s topography. Private small satellites must make sure they stay long in the earth’s orbit in a cost-effective manner. At present, most of these satellites’ chemical propulsion uses highly toxic fuels. These can not only cause instant death if not handled with care, but are also less efficient and productive, resulting in an increase in the overall operational cost.

The startup was founded by Tushar Jadhav (28), a former DRDO scientist and Ashtesh Kumar (25), Technological Leader Head, Electrical Systems, Pratham, IIT Bombay's student satellite project, in 2016. The duo met when both were working on Pratham on a 10 kg satellite, which was designed to the count the number of electrons in the ionosphere. Tushar is a graduate (BTech, MTech) of Aerospace Engineering while Ashtesh graduated with a BTech & MTech in Mechanical Engineering, both from IIT Bombay.

Seeing matching synergies, the duo decided to start up together to produce a green propulsion system.

Manastu's, on the other hand, uses less indigenous toxic fuel, and can provide an impulse for 275 seconds, making it 25 percent more productive as it consumes 25 percent less fuel, and promises a life span of five years for the satellites in orbit. At present, the prototype is under testing at its laboratory in Mumbai and at the Shell Oil and Gas campus at Bengaluru.

Further, the propulsion provided by Manastu Space is 60 percent cheaper compared to its competitors in the market. This is because since the fuel is 40 times less toxic than hydrazine, the kind currently used by companies, it results in lesser money spent to ensure safety and handling.

“The new fuel has 25 percent higher performance and hence, 25 percent less fuel is required for each satellite, making it 25 percent lighter. A two-tonne satellite using the old fuel will cost $40 million to launch. The same satellite, with new fuel, will weigh 1.5 tonnes and cost $28 million for launch, thus saving $12 million while making it half a tonne lighter.”

A universe of opportunities

The startup comprises eight members. In terms of guidance, the team has two advisers. Prof Arindrajit Chowdhury from the Department of Mechanical Engineering – IIT is an expert on combustion and has been mentoring the team on the development of the combustion chamber and fuel compositions.

The other adviser, Prof Jayesh Bellare from the Department of Chemical Engineering – IIT Bombay, is an expert in synthesis and characterisation of new catalyst materials and has been providing help in this area.

Manastu Space’s focus is on low-earth orbit satellites, which are the major consumers of the chemical-based propulsion system. When asked about private players in this space, Tushar explains,

“Around 15,000 satellites are planned in the next six-nine years. Eight constellations from the likes of SpaceX, Samsung, and Boeing will be sending thousands of satellites to provide internet to half the world’s population, and these satellite manufacturers are our customers in the near future.”

Manastu Space’s potential customers also include Lockheed Martin and Indian Space Research Organisation (ISRO). The startup is in talks with ISRO for a commercial development order following a technical review.

It provides a complete propulsion system, which includes engine, fuel, tank and other vital parts like thrusters with catalyst and fuel.

“A majority of customers have similar requirements except for changes in the thrust of the thruster and size of the propellant tank. The customer will be charged on sale per unit of these propulsion systems.”

Running a startup that helps satellites stay in space for long is no joke as the founders need investments in the initial stages to set up testing phases and build prototypes. But many innovators are cropping up in the space. Take, for example, Pixxel, with its small satellite constellation, or Agnikul Cosmos, which builds small launch vehicles for small satellites. These startups have come up with cost-effective solutions to cater to the needs of the global private space industry.

Tushar and Ashtesh have together invested Rs 50 lakh for the development of Manastu's technology at the laboratory scale. In 2018, the startup won the Indian Innovation Growth Programme, which gave them a prize money of Rs 25 lakh from Lockheed Martin and the Department of Science and Technology (DST). Now, Manastu is also a part of the Shell E4 accelerator programme.

“We also received funding from Shell Oil and Gas, India recently. Shell is also providing us with technical facilities and mentorship for development of some components of the technologies," Ashtesh adds.

ISRO is also helping Manastu Space through mentorship and guidance in developing this new technology.

In the near future, the startup is looking to reach Technology Readiness Level 7. This will mean that Manastu is ready to prove the performance of the propulsion in a simulated environment. Once this is successful, the propulsion system will be ready to put the satellite into space for flight testing.

Then, even the sky will not be the limit for this young startup.