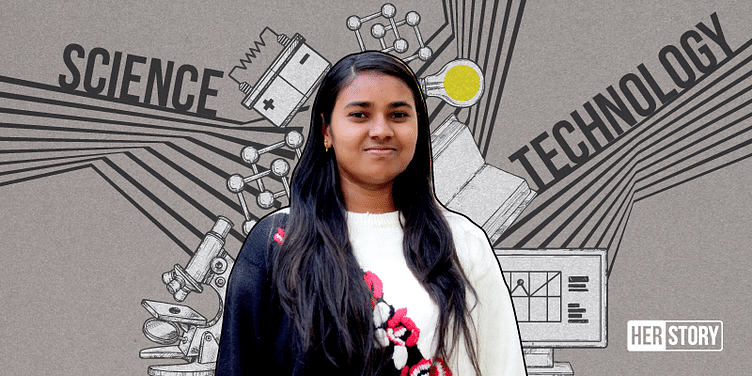 Co-founded by Nikhitha C, the Society for Space Education and Research Development aims to take the subject of space to school children using interactive and innovative methods of learning.

Space is an enchanting subject for many of us. Learning about the stars, the moon, constellations or the pale blue dot have all enriched our childhoods. But don’t we often wish that we had learnt the subject in depth, and in more interesting ways apart from a few lessons in our textbooks?

With interesting things happening in the world of space, and spacetech being important in the larger scheme of things, learning the subject means uncovering different facets we do not obviously learn from textbooks.

A Bengaluru-based NGO, Society for Space Education and Research Development aims to ignite this interest in space among students through its interactive programmes on the subject.

Co-founded by Nikhitha C in 2016, SSRED is on a mission to take space learning beyond just space.

In a conversation with HerStory, Nikhitha tells us more.

What SSERD does is simple. It collaborates with schools and designs courses specifically for students. Recently, the organisation was also invited to the Mauritius and Sri Lanka to teach students, and have their branch in Philippines.

The course teaches children the basic concepts of space exploration with Scientific Payloads launching into the space around 30-35km through High Altitude Balloons.

Space education has undergone a change over the years. Nikhitha says,

“A decade ago, we were introduced to computer science fundamentals at the primary level of schooling. If you ask why it was introduced, it was because it was the start of the IT revolution, and it was necessary to learn about it. Now, we at SSERD believe that we are going to be a part of the space revolution, and every student should know about space at a basic level. They need to understand how space is going to benefit them in their day-to-day lives.”

This woman in tech believes you are never too young for science. “Students from the age of four are interested to know about space like some of us do as adults,” she adds.

However, the team has limited its classes up to grade V, after which if a student is interested, he/she can join for the further courses. Nikhitha says that schools are willing to include space as a chapter from Grade I onwards.

The chapter included is about the Indian Space Research Organisation (ISRO), and for this, SSERD has got the space agency on-board for the chapter layout.

The course is designed by SSERD team in such a way that students learn the fundamentals of theory in the first phase, and making models in the second. Students get an idea of designing, modelling and executing projects. In the final phase, students test the models they have made and verify if they are giving the results as expected. If not, they rework on the ideas and start all over again. Thus, the Learn-Build-Launch method is integral to all lessons taught by SSERD. Maybe the next Elon Musk could come from India, thanks to Nikhitha's efforts.

SSERD also recently signed an MoU with the Akshaya Patra Foundation to educate around 350 students across nine government schools in Bengaluru, and Hyderabad selected and funded by the Foundation.

These lessons will be in the form of weekly sessions on space, and will last a year.

However, the road to revolutionise space education has not been easy for Nikhitha.

With a degree in Aerospace Engineering from Alliance University, Nikhitha had a tough time convincing her parents to start up on her own.

“They wanted me to go take up some random job, which fetch me a good salary. In fact, I got a job that would pay me Rs 1 lakh a month but I refused that offer. My parents literally started hating me. I don’t blame them. They wanted me to earn well, but I chose to be happy.”

With the time and hard work invested in SSERD, Nikhitha’s efforts finally paid off and the organisation has been recognised widely for its work.

Finally, her parents too came around and seeing her passion for the cause, supported her wholeheartedly. They also helped Nikhitha get office space on Sarjapur Road and scale the company. This, along with other motivating factors is helping her dream big.

What’s that they say? The sky is certainly not the limit!

Meet Katie Bouman, the young scientist who worked on the algorithm that helped create the image...

On a high: how mixologist Sonali Mullick is breaking stereotypes behind the bar