After 20+ years in business, Naukri.com parent Info Edge is upping its game with new-age tech 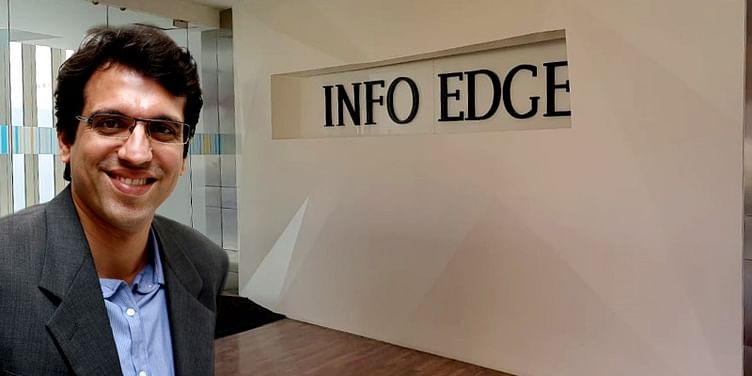 Info Edge is now looking to capitalise on its vast data bank by using AI, ML, and big data, and present an improved user experience. It is also looking to integrate its various platforms and offer new products to provide 360-degree solutions.

Started in the early days of the internet in India in 1997, Noida-based Info Edge, which runs Naukri.com, JeevanSathi.com, 99acres.com, and Shiksha.com, is one of the pioneers in the dot-com business.

Unsurprisingly, in the last 22 years, its Naukri platform has accumulated a vast amount of data - 60 million resumes and over 75,000 customers. Now, the company is looking to capitalise on this rich data bank by using artificial intelligence (AI), machine learning (ML), and big data to present an improved user experience. It is also looking to integrate its various platforms and offer new products to provide 360-degree solutions to the customer.

“As an organisation, we have become more data-driven to improve the experience for both employers and job seekers. The number one pain point for an employer is getting a lot of spam after posting a job and, similarly, for the job seeker, it is getting flooded with job alerts that are not relevant. Through AI and ML, which we are investing in majorly, we are now able to match jobs with resumes better than ever.”

Earlier, the company would outsource AI and ML jobs, but it has now started to invest in-house. “A whole bunch of doctorates in the subjects” have been brought on-board to solve the jobs matching problem and provide a faster, more efficient user experience on both sides of the spectrum. At present, there are about 100 people within the company working on ML, AI, and big data, including a dedicated data science team of 35. The product development team is 500-member strong and the total staff count for the group stands at 4,200.

The company is happy to loosen its purse strings for these tech spends, based on the needs. “We are not putting a budget and are happy to back as many good ideas as is out there on the tech front,” says Hitesh.

Taking on LinkedIn with a full stack

Meet Vibhore Sharma - the self-taught technologist who's CTO of Naukri.com

According to the CEO, Info Edge is aggressively investing in building a high-quality recruitment management system, offering a full-stack. He adds that “around 25,000 customers are using it already but there is still some way to go as the UI (user interface) pieces need to be streamlined.”

The full-stack includes career site management, referral management, a centralised database for tracking and storing resumes with a matching engine on top, along with shortlisting, screening, and onboarding processes, as well as reporting analytics to track recruiter productivity.

Hitesh says while the company does see LinkedIn, which offers a full-stack for professionals, as competition, the two operate in different segments. “We think LinkedIn works really well for hiring passive job seekers. It operates in the same segment as iimjobs (which the company recently acquired). LinkedIn is built more like a networking platform than for active job seeking,” he adds.

An appetite for acquisitions

Info Edge maintains that it is a big believer in small acquisitions that help to branch out and spur innovation. In May 2019, the company acquired Highorbit Careers, which owns iimjobs and hirist.com.

In 2012, it acquired consultancy firm Toostep, laying the foundation for its recruitment management system.

A year later, the Noida firm acquired IIT Bombay startup MakeSense Tech. This was its "first attempt at improving the matching (jobs with resumes) engine. Now they are out, and on a retainer,” says Hitesh.

Then, in 2017, the company acquired hiring startup AmbitionBox, which inspired the idea to build a holistic career platform (still a work-in-progress).

According to Hitesh, a platform like AmbitionBox can track one’s career path and growth, and has, in fact, more employee reviews than Glassdoor, the global platform that allows professionals to rate and review their past and current employers. He adds, “We will use the data to take Naukri from just a jobs platform to a career platform. We will integrate AmbitionBox more and more into it.”

The company is also working on a new offering for Naukri called Insights. As the name suggests, this will provide insights to both recruiters and job seekers on recruitment trends.

“If people are joining a certain company, say Flipkart, Insights will have data on which companies they are joining from. Similarly, if they are leaving a Flipkart or an Amazon, where they are going from there,” explains Hitesh.

Insights will also help reveal skills that are moving up or down in the job market to help people re-skill accordingly and make themselves more relevant. The platform will show migration trends in cities based on jobs as well.

On the company’s latest Highorbit Careers acquisition, Hitesh says, “They will inspire us to do a lot more in the premium hiring space.” And how does he see the acquisition reflect on Info Edge’s books?

“It is a very small business right now and is not going to reflect in our revenue prominently. But there is scope to build. It has a few hundred customers and if we can build hirist, it can become material from a revenue standpoint in the next two-three years,” he adds.

How to sell: Hitesh Oberoi on hiring, training and retaining a ‘rockstar’ sales team

In its endeavour to integrate and link its multiple offerings as much as possible, a beta version of a Naukri product is being tested with data and inputs from Info Edge’s education platform Shiksha.com. This will provide users with actual information on how graduates from various institutes are faring in their careers.

“We can see what happens to a student who passed out from a certain institute five years back and that can be fed into Shiksha, which offers information on which courses are hot, and which ones are popular in which college. We are working on integrating all this,” says Hitesh.

The company also plans to double its investments in First Naukri, a B2B service active in the campus hiring space, working with both institutes and companies.

Over the years, Info Edge has actively invested in startups such as Zomato, Happily Unmarried, and others. And it continues to actively scout for more startups to invest in as early-stage investors, “being most likely to cut the first or second cheque”.

“We go more by the quality and strength of the managing team than anything else. It should ideally be India specific, but nothing is cast in stone,” says Hitesh. In fact, it has a dedicated corporate development team that looks for companies to invest in or acquire.

The company is upping the tech for its other offerings - jeevansaathi.com and 99acres.com - as well. There is a fraud detection system in place to weed out suspicious and fraudulent posts using AI and ML, says Hitesh. Naukri too is using the system to identify and eliminate bogus postings.

For 99acres, Info Edge is considering using its dataset to present realistic price bands for people looking to sell or rent out properties so that transactions can move faster.

“We are also toying with the idea of alerting people on property price drops in areas they have shown interest in. Also, we can inform the user that these are hot projects, where we are seeing demand or this project is high on rental yield, etc.,” he says.

Given that the online dating business seems to be gathering steam in India with platforms such as Tinder and Bumble, does jeevansaathi.com have any plans to branch out into online dating?

Hitesh answers, “Never say never. But right now, we are not looking at it seriously. Unlike real estate and jobs, where we are leaders, we are not the leaders in matrimony. Shaadi and BharatMatrimony are much bigger than us. So our focus is more on market share than new products.”

While people are indeed excited about online dating, only a tiny percentage is participating in it, he adds. According to Hitesh, 80 percent of Indians are still not on matrimony sites.

In FY19, Info Edge clocked a standalone operating revenue of Rs 1,100 crore, not including other income. With so many plans in place, it would be an interesting company to watch out for in the next couple of years.