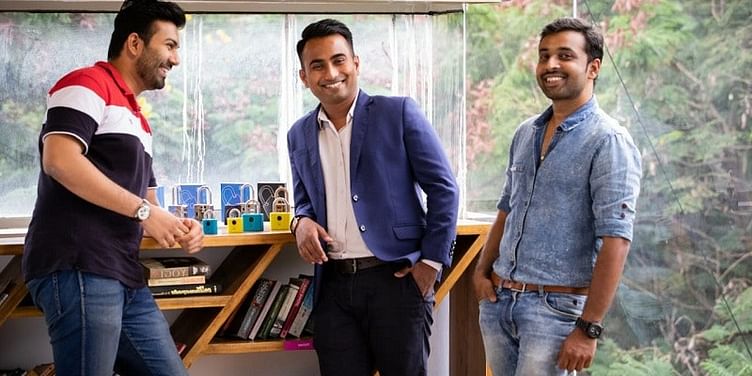 Founded by Gotama Gowda, Siddhesh Keluskar, and Rajshekar Jenne, Openapp is a new-age security and surveillance startup that fills in the gaps where security is the weakest.

Gone are the days when an expensive lock and key mechanism was enough to keep the thieves at bay. Over the last decade, locks have gone digital with the likes of Godrej pioneering them in India. However, startups are now adding Internet of Things (IoT) into this area.

Each lock can be operated on the cloud and opened from anywhere in the world. Openapp’s locks are available in the form factor of both padlocks and door locks.

Watch the founders in conversation with YourStory here:

How did it start

Gotama and Rajshekar are childhood friends. In 2014, Raj was working with a corporate in the UK market and had just moved back to India. He reconnected with Gotama who was keen to start up in the IoT space.

In search of the third co-founder, Gotama was looking to on-board a techie and had posted the requirement on Facebook. Soon, the two connected with Siddhesh over the same.

Incidentally, the three founders have very different backgrounds. While Gotama studied journalism and psychology from Christ University, Bengaluru, Raj has an MS in Advanced Marketing Management from Lancaster University. Siddesh has a master’s in Mechanical Engineering from IIT Kharagpur.

While discussing ideas around IoT, they homed in on locks because while the segment was going digital, it had not yet experimented with an IoT-based architecture. Openapp was born out of Gotama's garage to provide affordable and convenient security to the masses of India.

The founding trio, in their initial research, discovered that IoT is going to be a large emerging area by 2020. In fact, it is estimated that the world will have more IoT connected devices than humans by then.

“We wanted to build an original business innovation in India, one that has not been done before. AI-powered smart locks for end users and enterprises are going to be the way forward,” says Gotama.

For individuals, safety concerns lie around their tangible assets like mobile phones, wallets, passports, ID cards, laptops, and home security. For organisations, it is the safety of their products, which are either inside warehouses or on the move.

WATCH: Why Singapore-based logistics startup Ezyhaul is taking a U-turn and driving into India

“It is interesting to note that though we have taken huge strides technologically, with tech in every aspect of our lives - food, medicines, doctor consultations, banking, and shopping - but safety has remained the same for the last 100 years. Just padlocks with a bunch of keys. Some combinations can be copied innumerable times. Either not many tech-enabled hardware security options are available in the market or if they are, they cost too much. In a broader sense, security continues to be manpower-dependent,” says Gotama.

According to the United Nations, policing is going to become difficult. In India, there are only 144 police officers for every 100,000 citizens, making our police force one of the most understaffed in the world. Sadly, India’s police-to-population ratio lags behind most countries against the UN’s recommended ratio of 222.

To specifically address this gap, Openapp started by providing smart locks for the telecom industry in 2016. But the startup started scaling up only in 2019.

“With hundreds of smart cities coming up and Indian economy on a high growth trajectory, the demand for technology-based private security is set to increase,” says Gotama.

“In our early days, we came across a technician from a major telecom company cursing his fate and fiddling with his keys on MG Road. When Raj and I asked what was wrong, and he told us about the hassle of key management and how that is leading to massive battery thefts for the internet company that he's working for. For us, it was an opportunity that couldn’t be missed,” says Gotama.

Openapp was not ready with a commercially deployable product at the time or a tech team to finalise the design and a go-to-market plan. It was at this time that the duo realised they needed a third co-founder. Luckily, Siddhesh joined and made all the difference to the team.

The telecom company liked Openapp’s idea and believed that the founders would deliver on their promise. Gotama believes that they lucked out in meeting a company, which was ready to support a startup still in the embryo stage.

As a result, Openapp received its first formal order and a 25 percent advance to build a solution and deliver at scale.

The startup has two revenue models- selling devices and a monthly/annual software subscription, and ACaaS (Access Control as a Service).

Its technology is based on the core fundamentals of IoT, micro-services-based server architecture running on Amazon Web Services (AWS) with Kubernetes to achieve scalability.

They also have added features such as geo-fencing, time-based access, and five-level hierarchy access. The startup provides a modular web dashboard that can accommodate multiple industry use-cases.

As of now, Openapp has 50 clients. It also provides 24/7 call support and on-site training for its customers.

At present, it has revenue visibility of $2.5 million for the current year with a quarter of that committed. The startup expects to top that by 30-40 percent in the same year by scaling its alliance partner network in the next three months.

But, Gotama beat all odds and was able to raise a seed round of $500,000 from Axilor Ventures and Kumar Vembu of GoFrugal. Recently, Openapp also raised a pre-Series A round of $1.3 million from Unicorn Ventures and KITVEN, with participation from its seed round investors.

It plans to launch a range of fingerprint locks in the consumer segment for the first time during the second half of this year.

It does seem like IoT for security will become a household product very soon.