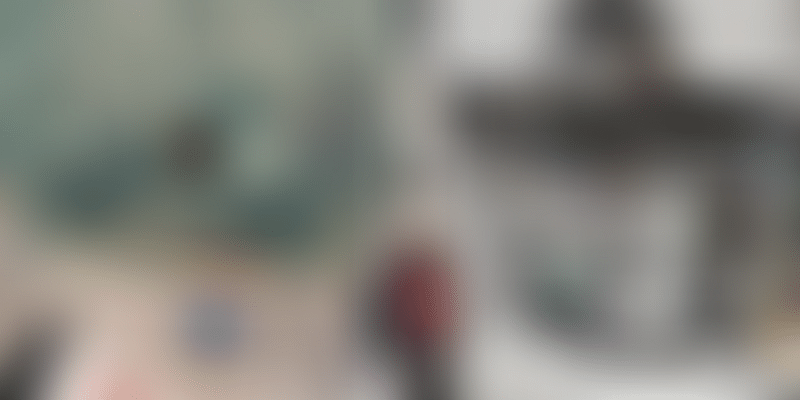 Sewage in drinking water is a reality in India. At Smart India Hackathon, six students invent a device that identifies contamination in water.

Team Irreplaceable Dream Crushers from Bannari Amman Institute of Technology, Sathyamangalam in Coimbatore showcased their device that checks drinkability of water. The team was among many others that focused on solutions to India’s innumerable grassroot problems. Team Irreplaceable Dream Crushers’ innovation won in the simple category with a cash prize of Rs 50,000.

Wastewater from the municipal sewage spring was accidentally released into Bhavani river which was the main source of potable water in and around Bannari college. This got Senthil Prabhu (18) and the other members of the team thinking -

While the problem was resolved in a few days by the college, the frequency of such contamination troubled Senthil and his teammates - Shruthi R (19), Sajeev S (18), Karthik Raja C (19), Vijay S (20), and Navin Kumar V B (20). They decided to put their heads together and ideate.

Among the many problem statements that were given to teams participating, Team Irreplaceable Dream Crushers chose the most relevant one - to develop safe drinking water.

They presented their product at REVA University (one of the 19 nodals centres where the SIH was held) – their answer was a water purifier that can determine levels of total dissolved solid (TDS) and pH in the water. If the water lacks any of the above, the device is programmed to supplement necessary minerals using Internet of Things (IoT).

“The machine calculates TDS, which should ideally be between 120 and 180. Depending on the content, the machine adjusts this balance by adding minerals to the water. With the pH levels, the Bureau of Indian Standards (BIS) suggests ideal levels to be around 6.8 to 7.8. Accordingly, the machine makes water more alkaline (less acidic),” team member Senthil says.

The disproportionate content of these minerals which forms TDS is associated with a risk of cancer and heart diseases.

The team began their research in the college lab, and focused on the app and website and product development. The key element, they say, was to make it more user-friendly, and IoT plays a huge role in their invention.

A mobile application is also in developmental stages, and it will measure the contents in three parameters - low, medium or high to enable the common man to understand the figures. The overall data will also be stored on a cloud platform.

The device was first tested on water from Bhavani river in Tamil Nadu, which indicated the figure 150, which was in the right range. On the contrary, processed commercial water showed figures as less as 8. This alarming low level of mineral content, Senthil explains, is lost when water goes through bacteria removal stages. According to the team, RO technologies are no different.

Purifying their way into the market

Apart from the prototype which was presented at the SIH, the team has developed four more devices to test and are installed at some members’ homes for testing.

Stating an accuracy rate of about 90 to 95 percent, the team will target metropolitan cities where almost every household has one RO technology in use, and people are unconsciously dependent on processed water.

The four models right now have running costs of around Rs 12,000 each, including maintenance cost of the cloud platform. The team is looking to cut costs, and market it at as economically as possible with a monthly subscription model of Rs 350.

“That will be like cable TV. We will install the device at home. Information on mineral content will be available both on the app and website,” Senthil adds.

They believe this will ensure a steady flow of income to run the cloud service. Moreover, on a larger scale (of around 100 customers) the cost is expected to lower from Rs 12,000 per unit to around Rs 4,000 to 5,000 each.

Yet, to enter the market as a useful and economical technology, they want to work on making the purifier smaller, and more reliable.

YourStory brings to you some amazing young individuals and their inventions, all who have taken up the challenge to solve some of the country’s problems.