Team Yantramanav’s multi-purpose robot does all the heavy lifting 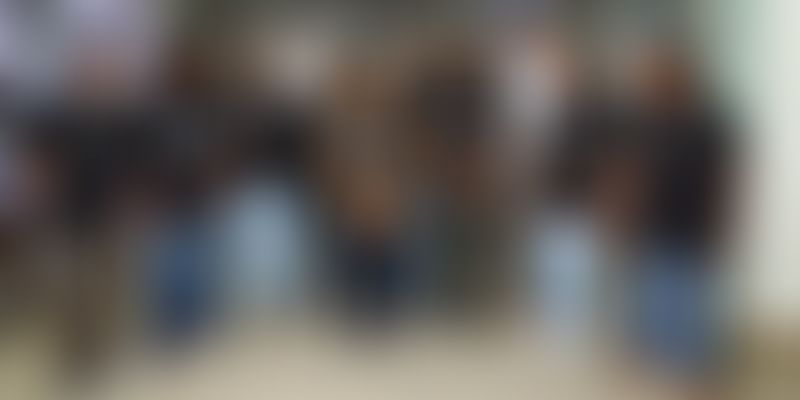 This multi-purpose robot helps increase productivity in diverse sectors, keeps workers safe, and can even aid the elderly.

Ecommerce has turned retail on its head. In fact, the Indian ecommerce market is expected to grow from $38.5 billion in 2017 to $200 billion by 2026. Supply chains and warehouse operations are the need of the hour. And a smart robot can ease the supply and demand cycle, considerably.

Increased workload and a concern for workers inspired Team Yantramanav to design a dual-purpose robot prototype, which they showcased at the Smart India Hackathon 2019-hardware edition. The team of six came up with a solution to one of the problems posed by Vanderlande – the development of a tele picking interface with an item-picking robot.

They were awarded the first prize, which included a cash prize of Rs 75,000 at Dayanand Sagar University, Bengaluru – one of the 19 SIH nodal centres where student innovations were awarded across India.

A concern for tireless workers

Robots are very versatile in the industrial sector. Moreover, bots can be used in environments where the worker’s safety is endangered. A recent media report revealed worrying data from the Labour and Employment Ministry - every day, 47 factory workers are injured and three die in accidents in India. Team Yantramanav wanted to be able to protect the workforce with their innovation.

All the students are from Prathyusha Engineering College in Tiruvallur along with their faculty mentor - N. Gopinath, assistant professor, mechanical engineering, developed a working prototype called Pecrobo 1.0 which efficiently picks and places items, and reduces injury.

How their dual-purpose robot came into existence, team leader Harini elaborates, “We were working on different academic projects under the guidance of our mentors - Professor Gopinath and Professor Malathi. They had formed a group working on robotics-related projects, that’s how our team was formed.”

How Pecrobo 1.0 saves lives, and money

“One of the applications included the design and development of a robot employed at warehouses, which functioned in both autonomous and semi-autonomous modes. The merits of such robots include the extension of work duration, reduction of sudden accidents, assurance of safety and security of the product, machine and worker,” Harini says of their bot’s utilitarian essence.

Their robot can be controlled manually from a remote location by an operator who can visualise the required action, and its environment, precisely.

“Remote use of the RF transmitter with a receiver or video streaming to control the robot’s movement is the Pecrobo 1.0’s main USP,” Harini adds. The video streaming can be observed by the operator who controls movement using either an app or a joystick.

To aid humans, not take away their jobs

In an era where AI is threatening livelihoods of entire workforces across sectors, Harini stresses that their type of robot will not take away work from humans. Why? This robot is human-operated. It also reduces a worker’s load. Similar robots in the market cost approximately Rs 50,000, the students say. The robot was designed at Dayanand Sagar University, Bengaluru – the nodal centre.

The team’s multi-purpose robot can be used for different tasks, and in sectors like healthcare and hospitals too. Pecrobo 1.0 can also help the elderly who live alone in household chores like lifting, etc.

“Our product can be used at any warehouse to pick up loads. It offers the operator a choice of alternating between pneumatic and vacuum grippers, thus enhancing safety and security for the worker, robot and the load. Easy to operate, it reduces repetitive work, increases productivity and saves time,” Harini adds.

How the bot became a gofer!

“I am in my final year while the others are in the third year. We now want to further enhance a few of its features to get it market-ready,” she says.