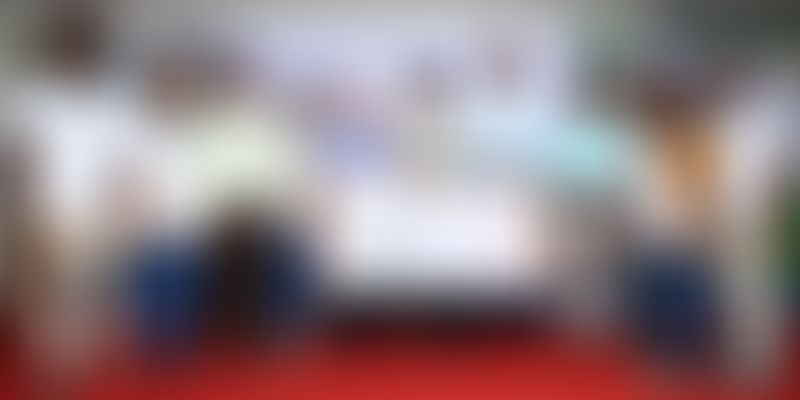 Reducing energy consumption, Team GNAN MILITANTS designed a ceiling fan that can alternate between battery and main power circuits, and has a charge that can last over three hours. The team won Rs 50,000 at the Smart India Hackathon

Despite India’s 100 percent rural electrification benchmark, irregular power supply, and concomitant power issues are endemic in rural areas. The massive use of coal and other fossil fuels for power generation also add to the carbon footprint, especially in our country which depends on coal for 55 percent of its electricity requirements.

Team GNAN MILITANTS took the onus on themselves to address this with an innovative ceiling fan which runs by recycling energy through self-charging at the Smart India Hackathon’s nodal centre Dayananda Sagar University. They won Rs 50,000 as a cash prize for their innovation.

The need of the hour

Interestingly, while village electrification is the first step in delivering power across India, a village is declared electrified if just 10 percent of the households have electricity. Regular supply of electricity is a huge cause for concern, and Team Gnan Militants wanted to reduce power consumption while giving an alternative during low voltage in many rural areas.

The six students from Tamil Nadu designed a ceiling fan that recycle power to run and can alternate from self-charged to main power and vice versa.

It also provides relief during the hot Indian summer when power cuts are high.

How they came together

From Gnanamani College of Engineering, Namakkal in Tamil Nadu, P Thamodharan, P Vinnarasu, R Ranjith, P Sevakumar, EV Sriarchana and K Roseya were in their second year of electronics and communication engineering (ECE) at the time of attending the SIH.

When their college dean informed them about SIH, many students from the second year volunteered to be a part of the hackathon. After discussions, Thamodharan was chosen as team lead, and he along with Vinnarasu chose four students to complete Team Gnan Militants.

The student designed a ceiling fan that primarily recycles energy through a self-charging process. The recycling is carried out through conversion of mechanical energy to electrical energy. The energy produced by the rotation of the fan is captured, and stored in a battery fixed on the fan. The same energy is then used by the fan, during low voltage or power outages.

P Vinnarasu explains, “The main motto of our project was to reduce the utilisation of electrical energy consumed by devices. The energy resources of the planet will not last forever. Keeping this in mind, we designed a self-charging fan.”

He adds, “We are like-minded students. The idea behind the project emerged due to our collective curiosity about recycling energy for sustainable development.”

Vinnarasu claims that self-charging fans are not available in India, and whatever is available abroad is expensive. The cost of their self-charging fan prototype is between Rs 4,000 to Rs 5,000. “The capacity of our battery is 7.2 Ah. It takes nearly four hours to get fully charged. And it takes 3.6 hours to discharge,” he added. The students used micro-controllers, voltage-sensing detection, and a few software programmes to design the ceiling fan.

How does the fan work?

Initially, they used a lead acid battery, and now the team wants to use a lithium polymer one as it is compact in size and more efficient. Whenever the battery is charging, the fan will rotate 10 percent slower than its potential, they say. A special gear coupling mechanism was also used to prevent heavy vibration, and to balance the weight of the fan.

Thamodaran and Vinnarasu worked on the electrical details. “The others focused on PPT, technical explanation and research,” says Vinnarasu.

The students want to do further research, and work on using rooftop solar panels for their projects. “We might startup by the end of the final year. We are also interested in doing IoT-based research to control pollution,” says Vinnarasu.