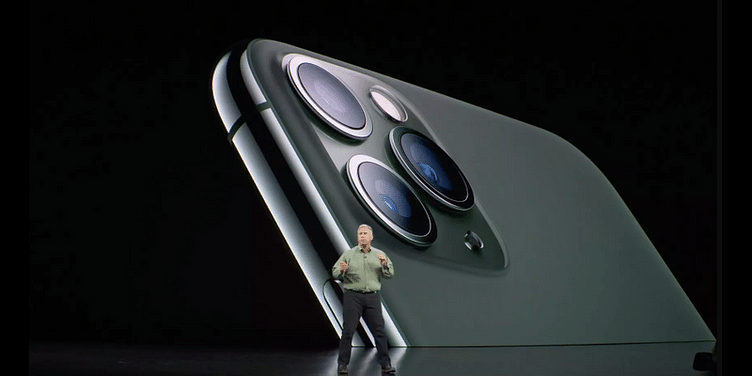 The iPhone 11 range goes on sale in India starting September 20. And, Apple's new gaming and streaming services go live in November. Here are the highlights from last night's Apple Event.

Not a foldable iPhone yet. No 5G support either. (That's for 2020). But, all other predictions about Apple's new iPhone line have come true.

The iPhone 11, iPhone 11 Pro, and iPhone 11 Pro Max launches headlined Apple's annual gala at the Steve Jobs Theatre in Cupertino. All three handsets will feature Apple’s new A13 bionic chipset, and will run iOS 13 out of the box.

The iPhone 11 is available in six colours at a starting price of $699. It is essentially an upgrade to the iPhone XR, with much improved sensors, a dedicated Night Mode, the ability to take wide-angle shots, a redesigned camera module, and a faster Face ID.

Apple has also introduced a new camera feature known as slow-motion selfies or ‘slofies' as the company termed it. It lets users snap moving selfies with the 12-megapixel True Depth camera in the front.

The iPhone 11 Pro is the first iPhone to sport the 'pro' tag, and also the first Apple handset to feature a triple-camera setup (the new norm in the smartphone universe).

It comes with a 2x telephoto lens along with the iPhone 11's wide and ultra-wide cameras. This is similar to the camera setups of Android flagships like the Huawei P30 Pro and the Samsung Galaxy S10.

It shoots nine images before the user presses the camera shutter, takes a long exposure when you shoot, then selects the best of the shots, and optimises the picture for finer details and low noise.

Each camera in the 11 Pro can record 4K video with extended dynamic range and cinematic video stabilisation. With a wider field of view and large focal plane, the Ultra Wide camera is great for shooting action videos, Apple said.

Users can seamlessly zoom between each of the three cameras, while the Audio Zoom feature matches the audio to the video framing for more dynamic sound.

"iPhone 11 Pro has the first triple-camera system in iPhone and is far and away the best camera we’ve ever made, it provides our customers with great range of creative control and advanced photo and video editing features in iOS 13. The Super Retina XDR is the brightest and most advanced display in iPhone."

Both the Pro and the Pro Max also come with a longer battery life. Apple is also bundling a fast charging adapter (18W) in the box. The iPhone11 Pro charge lasts four hours more than the iPhone XS, the company claims. "The A13 Bionic chip sets a new bar for smartphone performance and power efficiency," it adds.

Both handsets will be available in India September 27 onwards.

The Apple Watch Series 5 features an innovative Always-On Retina display that never sleeps, but can drop as low as 1Hz to save power. This means you can check information on the screen any time without having to tap on the display.

For the first time, Apple Watch buyers stand to enjoy a more personalised experience at Apple Stores, on apple.com, and on the Apple Store app.

"The new Apple Watch Studio gives customers the opportunity to pick their preferred case and band combination to create a look that is uniquely their own," Apple said in a statement.

Apple had unveiled its subscription-based gaming service, Apple Arcade, in March. The service releases on September 19, and can be availed at $4.99 a month. In India, it will cost Rs 99 per month and come with a one-month free trial.

Arcade is Apple's answer to Google Stadia, and will offer users an ad-free gaming experience on iPhone, iPad, Mac, and Apple TV (even in offline mode). The service will roll out in 150 markets this year.

Over a 100 exclusive games can be downloaded from the Apple App Store, and Arcade can be shared by "up to six family members".

Meanwhile, Apple's Netflix-challenger streaming service will also be available at $4.99 (Rs 99 in India) per month along with a one-month free trial. This makes it the cheapest streaming service in the market, beating rivals Disney+, Hulu, Netflix, and others.

The first shows on Apple TV+ will start streaming on November 1. Users who buy a new iPhone, iPad, or Apple TV starting today stand to earn a free one-year subscription.

The company had earlier said that Apple TV+ will house content from the iTunes Store, as well as shows from partners, HBO, CBS, Starz, Showtime, MUBI, Eros Now (whose entire library Apple had acquired in 2017), and also pay-TV subscriptions and original shows Apple is developing. It is reportedly spending upwards of $2 billion on them.