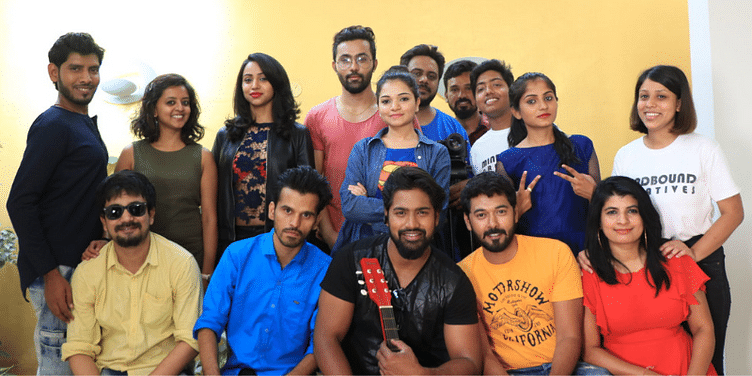 Started in Bhubaneshwar by Smaranika Jena and Shushrut Mohanty in 2018, Mindbound Creatives now has a presence in four major Indian cities and includes Paytm, BMW, and Indian Oil Corporation among its clients. Here’s how they did it.

What happens when a filmmaker and a brand strategist come together to start something on their own?

For childhood friends Smaranika Jena and Shushrut Mohanty, it meant the inception of a creative advertising agency that could successfully plug the gap in the market to serve both big enterprises and startups.

Smaranika, with her background in marketing and experience at Cognizant Technology Solutions as an analysis programmer, brought in branding expertise. Shushrut, an avid filmmaker who has been dabbling in the art since the age of 15 years, took to managing the creative side of the business.

Together, the duo founded Mindbound Creatives in 2018 in Bhubaneswar, Odisha. The branding and advertising solutions company, however, has since shifted its base to Bengaluru, for better scope in terms of growth and collaboration.

“We launched the company as a storytelling platform to act as a medium of inspiration where we published talks and stories by entrepreneurs, activists, and thought leaders,” says Smaranika, the Co-Founder and CEO of Mindbound Creatives, a bootstrapped venture launched with an initial investment of 1.5 lakh.

On observing, however, how creative storytelling and the visual medium was underutilised in terms of branding, she says they ventured into video production for SMBs, startups, and other digital agencies.

Mindbound today boasts a diverse team and looks after the branding needs of a business from end-to-end – from ideating to publishing. It is also the first subscription-based content agency working with videos, claim the founders.

Creative and company – bridging the gap

While there’s no dearth of creative ad agencies, only a few are able to carve a niche for themselves in this already overcrowded market. One reason behind this is lack of synchronisation between the agency and startups/SMEs.

With a combined background in psychology, user behaviour, digital strategy, cinematography, editing, motion graphics, and project management, Mindbound’s creative team uses storytelling as a tool for creating a meaningful relationship between the brand and its consumers. Their expertise ranges across TVCs, commercials for the web, corporate films, educational video series, animation, and other branding content.

Most recently, they even launched a campaign called "Say No To Free Works" to become the voice of countless independent professionals in the creative field.

From Paytm to BMW and Indian Oil

“We are a B2B business. Our target audience are brands who actively invest in and generate value from content marketing and advertising,” says the brain behind the startup.

Their customers include a mix of enterprises and startups, including big guns like Paytm, BMW, Indian Oil Corporation, Hyperconnect, Clensta, Biggies Burger, Bookingjini, and more. “Our first clients found us and approached us via referrals,” Smaranika says. “We have generated many clients through inbound marketing and through our storytelling videos.”

With such big names in their kitty, especially for a creative agency that’s been in operation for less than a year, it’s not difficult to see that the company has an impressive track record.

In a span of just eight months, Mindbound has achieved gross revenue of more than Rs 80 lakh with a 40 percent profit margin. The company, which has both project-based and subscription-based revenue models, currently has seven businesses availing its subscription service.

“We only work with 10 clients at a time with our subscription plans to ensure quality,” Smaranika says.

The Young Innovator of Odisha

With new players finding a footing in the startup ecosystem each day, it’s certainly an exciting time for creative agencies. In fact, in the short span of time that Mindbound has been in operation, the startup has already garnered quite a few laurels.

The company was conferred with the Young Innovator of Odisha award by Chief Minister Naveen Patnaik at Startup India Odisha Yatra 2018. That year, Mindbound also became the only startup from Odisha to secure a WEE fellowship from IIT-Delhi, says the founder.

She adds, “With all the campaigns and activities, in the year 2019, Mindbound even got a chance to exhibit at INNOVFEST UNBOUND, the trade show of Singapore.”

A team of eight people at present, with more than 25 freelancers, the startup has a presence across major Indian cities, including Delhi, Bengaluru, Chennai, and Bhubaneshwar. And these stats can only be expected to grow in the future.

As per an IBEF report, India’s digital advertisement market is projected to record a growth at 33.5 percent CAGR to cross Rs 25,500 crore by 2020.It’s a market ripe for disruption, and in this space, Mindbound hopes to provide value and result to its clients to ensure 100 percent retention rate.

While the founders are not looking to raise funds anytime soon, they are positive about creating value and generating revenue out of the business organically.

Their strategy, going forward, is simple: to continue bridging the gap in the market and deliver quality content to both large and small enterprises. In doing so, however, the founding duo also hopes to create awareness around branding and content marketing to generate value from them.

“We are continuously trying to do so with free valuable content on YouTube and free resources,” says Smaranika. “We look forward to creating value for more companies in India and abroad.”