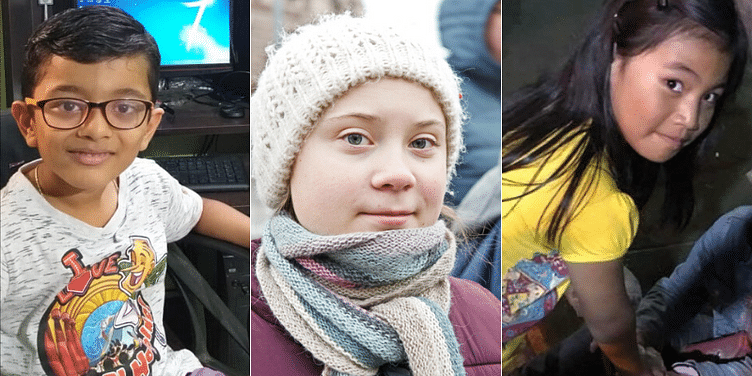 On Children’s Day, we take a look at some young heroes, known and unsung, who are hustling and bustling to make the world a better place.

Former US President Herbert Hoover once said, “Children are our most valuable resource.”

On September 23, the Swedish teenage activist, whose campaigns on environmental protection have gained international recognition, took the stage at the United Nations Summit to condemn global leaders for their failure to acknowledge and act upon the pressing issue of climate crisis.

In a stinging speech, Greta addressed governments across the world, questioning their empty words.

“The eyes of all future generations are upon you. And if you choose to fail us, I say we will never forgive you. We will not let you get away with this. Right here, right now is where we draw the line,” she announced.

And this is not her first rodeo. Greta first grabbed eyeballs in 2018 when she started spending time outside the Swedish parliament, armed with her “School strike for the climate” placard, calling for immediate and actionable steps towards solving global warming.

Her small step stirred a significant movement and today, she is synonymous with teenage activism, even being touted as a role model for children and adults alike. In fact, Time magazine went on to hail the young activist as the “next generation leader”.

Greta is proof that it is truly never too early to usher in change and make the world a better place.

They say, change comes in waves. If Greta’s words and actions have ignited the much-needed conversation on the pressing topic of climate change, seven-year-old Licypriya Kangujam from Manipur, India, has taken it a step ahead, addressing plans and methods required to reduce damages and disasters caused by deadly natural calamities.

The Class 2 student, touted as the youngest climate activist in India, Licpriya has vocalised her concerns directly to Indian lawmakers and politicians outside the Indian Parliament.

Her biggest achievement was when she recently attended the sixth session of Global Platform for Disaster Risk Reduction 2019, held in the UN headquarters Geneva, Switzerland. All of seven, the Manipur native represented children from the entire APAC region, addressing the UN along with 3,000 other delegates and participants from 140 countries.

Then, there are young heroes like Sanjana Runwal, working at the grassroots level to make life better for those not so privileged in the society.

A student of Class 10 of Bombay Scottish School, Sanjana has been working tirelessly for the welfare of the numerous ragpickers in Mumbai. Through her NGO Clean Up Foundation, she started an initiative to provide better health, sanitation, and education to the ragpickers in the city.

“For this initiative, I have been working with the Aasra Foundation and the H-west ward of Municipal Corporation of Greater Mumbai (MCGM). So far, I have provided the ragpickers of the H west ward protective gears like raincoats and gumboots for the monsoons, and also followed it up by installing a sanitary pad vending machine,” she tells us.

“At the moment, I am working on providing educational assistance for their children and exploring the possibility of offering them some kind of medical insurance or assistance,” adds Sanjana.

Interestingly, “change” and the “need to give back to the society” are the two factors that have pushed the 15-year-old to campaign for the less privileged members of the society.

And in this mission of ushering change, Sanjana is certainly not fighting solo. Meet 17-year-old Payal Jangid, who is relentlessly trying to abolish child marriage in Hinsla, a child-friendly village (Bal Mitra Gram) 100 km from Jaipur, Rajasthan.

Her mission, started on a rather personal note – she refused to get married when she was just 11-years-old. She has brought into spotlight the pertinent issue of child marriage.

This also earned her the Changemaker Award by the Bill and Melinda Gates Foundation at the Goalkeepers Global Goals Awards held in New York On September 24, 2019.

Here’s another thing about change – it’s not always about the big leaps but also about the first, significant step. While activists like Greta, Licypriya, and Payal are sowing the seeds of a better, more compassionate, and more inclusive tomorrow, a bunch of young tech wizards are solving problems at the grassroots level. After all, little drops of water make a mighty ocean.

All of seven, Hirranyaa Rajani has not only taken to coding at a young age, but also developed an app for hearing impaired children. It is pretty simple – once logged in, a person can enter a word, following which the app picks up the alphabets and shows them the sign for that word.

This enables better communication with hearing-impaired individuals and can also be used by people who want to learn sign language.

On what her inspiration was, she tells YourStory,

“I have always been empathetic towards specially-abled people as my own brother is confined to a wheelchair. I understand their struggle to convey what they feel.”

Once these goals are fulfilled, these young users are rewarded with points, which motivates them to engage in desired behaviour, making them more responsible in the long run.

Venkat says, “The app will motivate kids to do their daily tasks and become responsible human beings. This will also help them be more empathetic towards other people in the world and help build their interpersonal skills.”

In fact, traits like empathy and concern for the environment are what will help change the world for better. This change could also be in the form of something as thoughtful as initiating a book barter system.

Through his app Book Barter, nine-year-old Vihaan Khera from Gurugram is accomplishing just that. “The app helps users to upload information of the book they want to exchange. They can also click a picture of the book and upload it on the app,” he says.

“Exchanging books will not only save money but will also save the environment. It will allow everyone an opportunity to interact with new people who have similar reading interests, helping them improve their social skills,” he adds.

These three young coders all picked up lessons on coding with some help from online platform WhiteHat Jr, stirring change at a local level. With small but significant steps, they are solving issues ranging across environment and society.

As Karan Bajaj, the CEO and Founder of WhiteHat Jr, best put it: “By teaching kids these skills at a young age, we hope to create the next generation of digital entrepreneurs who can create apps and digital products that can make the world a better place.”

A little push and awareness can do a lot as these young changemakers show us.

Meet Charak Pharma: A business as old as India