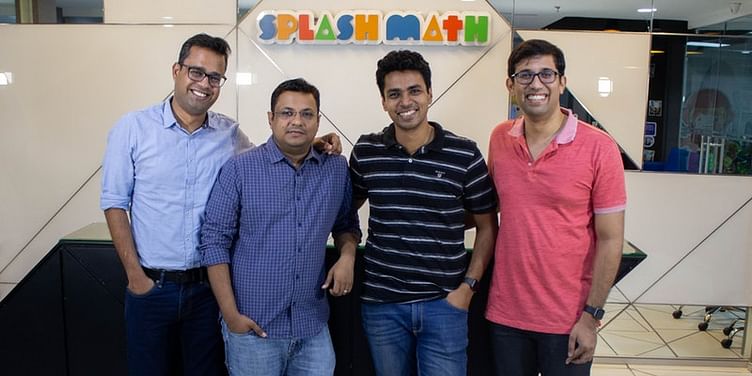 Edtech startup StudyPad managed to break even within three months of its first app launch. Its offering Splash Math is used in more than 150 countries by 30 million users.

Classmates, hostel wingmates and friends - Joy Deep Nath, Mayank Jain, Umang Jain and Arpit Jain - knew right from their college days at IIT Kharagpur, that they wanted to be their own bosses. In fact, the group of four always had an entrepreneurial streak having built their first startup as IIT students.

In their fifth year at Kharagpur, while pursuing a dual degree in computer science, they launched their first startup Intinno. They even managed to convince their professors to consider it a masters programme project and earn academic credits for it.

What did their folks think about this stance to stay away from the regular and secure job market? Since the poster boys of the Indian startup ecosystem had not quite become public figures yet, it would have been natural for their parents to be wary.

“We all had pre-placement offers. In fact, we were the first recipients of the deferred placement programme at IIT. This meant that we could pursue our startup for two years and if it did not work out, we could come back for placements. So our parents were cool about it. But we knew we were never coming back for placements. It was a good buffer for our parents though,” quips Joy Deep.

Intinno was started as a learning management system (LMS). The four were teaching assistants (TAs) as masters students and each had to check and evaluate 300 programmes weekly.

“We decided to create a LMS where students could upload programmes into a system which automatically ran it with input test cases, and also check the output. It would then tell them if they got it right. It would also pick up plagiarism and inform the professors,” says Joy Deep.

They figured the same platform could be used by professors to conveniently share content in the form of PDFs, PPTs, etc with students. Within a few months, 60 percent of the professors adopted the platform, and started using it to create course structures.

The four friends also launched Intinno Narad, a messaging platform where various departments within the college could share messages related to placements, etc in a controlled manner with students.

“Back in 2008, we probably came out with the first SaaS (software as a service) product for education. But by 2009-10, we realised it was not going where we wanted it to go. Business-wise we had broken even but we were at it 24/7, and were not seeing the kind of returns we expected,” says Joy Deep.

Losing her father and all her family’s money pushed this woman to fix the broken medical system...

Having been passionate about education always, when Apple’s iPads came out in 2010, the friends thought the “form factor” of the device was perfect for learning, and bet on the fact that it would be a learning device for children. They then decided to move to content from the earlier platform approach. They aimed to target a 'more mature market'.

“By then, half of our classmates were already in the US. Through our network, we spoke to 100 parents and teachers to understand the need of the market,” Joy Deep says.

Math and reading, they found, were the two most important skills focussed upon at elementary school. Since mathematics was their strong point, they decided to capitalise on that while putting together their new startup StudyPad, which was incorporated in the US in 2010.

The co-founders remained Gurugram-based though. The product offering was called Splash Math and the first app launch happened in 2011, for children between ages four and 10. The business managed to break even in three months.

The quartet had on board teacher advisors from the US to help them develop content. Splash Math hit the market at a time when the United States was undergoing a change in its education system. Former President Barack Obama had announced in 2010 that the US was looking to adopt a uniform school curriculum across states.

“We had come across an OECD survey that said 50 percent kids in the US hate math. This primarily comes from the fear of the subject. Our main objective was that the child should have fun, and stay engaged, killing that fear. We used interactive tools and gamified the learning process to address this,” says Joy Deep, adding, “The best way to approach fearless learning is getting the child to do something they like, and they always like games.”

The business model, growth and funding

The startup used to charge $10 for a classroom’s content, and moved to a subscription model two years ago. It now charges $8 per month and $60 per year. The app is free for teachers to use in school, and 4.4 lakh teachers use it across 77,000 schools.

It has 30 million users, with around 75 percent of the business coming from the US. Despite the United States being its majority market, Splash Math has its presence in over 150 countries, and covers over 400 math skills.

“Seventy percent of our traffic is organic - if you search for subtraction or addition at the US App Store, Splash Math comes up,” says Joy Deep.

The company is reticent about sharing exact topline and bottomline figures but says that it is profitable and has been witnessing 50 percent year-on-year growth in revenues for the past couple of years.

It also recently raised an undisclosed amount from Accel Partners in its first round of institutional funding. “We wanted to get a strategic investment. We said, ‘let’s get an institutional investor on board to focus on growth, and have cash as a buffer.’ We are looking at getting into multiple markets like the UK and Mexico in the coming months,” says Joy Deep.

Back in 2010, the company had raised angel funding of $100,000 from the IIT alumni network in the US. The company has a team of 240 based in Gurugram, and has doubled its headcount over the past year.

Splash Math was launched on Android in 2014-15 but was taken off in two years because the company had a small team back then, and was unable to support the large universe of android devices.

“We wanted the UI/UX (user interface/user experience) to be perfect for Android users across devices, and back then with a lean team, we could not do that. Hence, we decided to pull out and stick with Apple,” says Joy Deep.

But the startup is now ready to launch on the Android platform by early next year as it looks to cater to India and other developing markets. It has hired a team that already has an internal prototype in place.

The startup might also look at raising another round of funding next year to fuel growth as it looks at newer markets. Joy Deep says that in keeping with the company’s core philosophy - to remove the fear of learning, plans are to introduce coding to kids and financial literacy to children.

There are also considerations to offer their products on augmented reality (AR) and virtual reality (VR) platforms as consumers shift towards them. “We have already started fiddling around with these platforms to reimagine the way learning content is produced,” adds Joy Deep.

As far as the target group is concerned, for now, the company wants to keep its focus on the four to 10 age bracket because it wants to facilitate “early intervention.” But, eventually, it has plans to cater to 12th grade and above.

According to MarketWatch, the online K-12 education market is estimated to be worth over $67 billion and pegged to cross $300 billion by 2024.