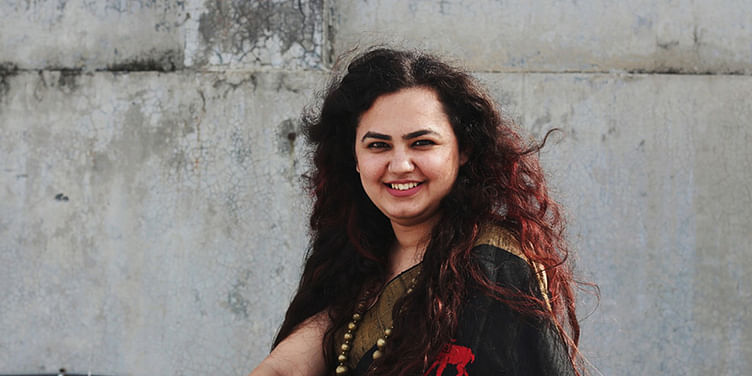 Despite facing several road bumps on her entrepreneurial journey, Shineel Tilwani established The House of Artisans (THOA) in 2016. Starting with just Rs 12,000, she managed to break-even in six months. With a global clientele, the company today clocks Rs 2 crore in revenues.

Shineel (who prefers to go by her first name) always had an entrepreneurial streak in her, having started her first venture, selling organic luxury skincare and haircare products, as a 20-year old undergraduate student in 2010 at Mumbai’s Narsee Monjee Institute of Management Studies (NMIMS).

From as early as her school days, she knew she wanted to do something on her own. But, her engineer-MBA father, who worked his way up the corporate ladder to hold leadership positions, wanted his daughter to follow in his footsteps. Giving in to her father’s wishes, Shineel completed her MBA from Welingkar Institute of Management, Mumbai and went on to join textile manufacturer, Arvind Ltd. in Ahmedabad in 2015.

Her heart still lay in business, and she continued it as a side gig, manufacturing and selling organic skincare and haircare products. The products were self-titled as Shineel. Business was good, and 10 months into Arvind, Shineel decided to quit her day job to focus on her personal venture full-time. Her family advised her against the move. In fact, around the time she quit, Shineel was getting a promotion at Arvind, and her father was keen that she stick to the job where she was being recognised and rewarded for her efforts.

In early 2016 Shineel took the full-fledged plunge into entrepreneurship. She had savings that would last her four months. In a cruel twist of fate, 20 orders a day that she was receiving earlier, came down to 20 in a month, over the next four months.

Shineel reminisces about the difficult period, “I was very disillusioned and depressed. I started reading all sort of self-help books. I thought this was karma catching up with me for not listening to my parents and letting them down.”

To help Shineel refresh and reflect, her boyfriend at the time (later husband and now business partner) Varun Arora planned a trip to the hills. As luck would have it, a serendipitous meeting during this vacation would put her right back on track. They were staying at a royal palace turned hotel near Dharamsala, where she ran into the owner, an erstwhile maharaja. He took an interest in her work and asked for a sample. A fortnight later she got a call from him asking her to do the hampers for his nephew’s royal wedding. The said royal family guards their privacy fiercely and does not want to be named in the media.

“Then it was one royal wedding after the other. The word spread and I kept getting orders from them and my network expanded to 17 royal families. Our luxurious beauty oil had 24-carat gold in it, and the packaging was also in 24-carat gold. It was an ultra-luxury,” she says.

While brands like Dior, Estee Lauder and Gucci also have luxury offerings in the same space, they were “chemicalised” according to Shineel. Her range, on the other hand, was all-natural and organic, something that resonated with the royals.

“Each product was customised. I wasn’t making batches, I was making one product for one client and thus allowed to charge a handsome premium because it was made to order,” she says.

Shineel is reticent about her profit margins and revenue numbers from this phase. However, she reveals that she was working on 100 percent advance and the margins were ‘pretty good.’

While she was doing well business-wise, she realised it would plateau soon and thus wanted  to expand and reach out to more royal families and clients. She decided to launch the business online in October 2016, which did not go down well with the royals who felt the move would affect the exclusivity of the offerings.

“Despite promises of still continuing to serve exclusive products, and keeping access to the website mostly password-protected, the royals were still not happy with an online launch and said they would not provide testimonials for the website,” says Shineel. It was a big setback for her as the testimonials were imperative for her to help reach out to others and scale her business.

Just as she had started to wonder if she should get into a different product line, another chance encounter happened. Shineel had a ‘Eureka’ moment when saw carved elephants selling at a WHSmith store at the Mumbai airport. These products typically retail between Rs 2,000 and Rs 4,000. Shineel remembered that she had seen these exact elephants at one of the wood artisan's houses, who was doing packaging for her skincare and haircare line.

He had told her they get as little as Rs 22 per piece, and make about three pieces in a day. She asked him to create six carved products and send it out to friends and family, who usually collect such things to get their feedback.

The response was apparently ‘phenomenal’ and that is how Shineel’s latest venture, The House of Artisans (THOA) was born in 2016. She started the new business with a personal capital for Rs 12,000. Today, it is a Rs 2 crore business and sells much more than just wood carved collectibles and caters to both B2B and B2C.

Shineel had come in direct contact with artisans while catering to the royal families. “I had started doing my packaging directly with artisans because typically suppliers don’t do such small-scale and micro-level customisations,” she says.

To connect with artisans, she travelled extensively across the country to several villages and towns for 18 months. She tied up with design stores and concept restaurants in Spain, Australia, United States, UAE and Canada and started supplying handcrafted products made from wood, pearl, ceramics, metal, and textiles.

In just six months, THOA broke even and became profitable within the first year. Currently, more than 50 percent of the company’s business comes from overseas.

The Gurugram startup doesn’t just work with artisans from India, but also with those from Tunisia and Nepal. “Tunisia is known for Olive wood , the hardest wood in the world. It smells of Olive oil and does not need any treatment. They are experts at working with it there. In Nepal, weaving cane is one of their expertise areas. We get these things done from there,” says Shineel.

The USP  (unique selling proposition) of THOA revolves around “imperfection”.

“At THOA we celebrate imperfections. There are two things that are common across our offerings - they are handcrafted and have some imperfection or the other, it is a sort of a signature,” says Shineel.

Speaking of the product line, she says the company does not restrict itself to any particular portfolio. “We are currently working on home décor, kitchen and dining, personal accessories and gourmet products. The only rule is that it has to be handcrafted, raw and imperfect. Hence our product line is constantly expanding and evolving,” she adds.

Another aspect of her business that stands out, is the fact that all the artisans who work with the company are salaried and do not work on an ad-hoc basis, which is usually the norm. There is an interesting backstory to how the salary model came about. Initially, when Shineel had approached the artisans to work for THOA, they had refused, despite her offering them three times of what they get from their seths or middlemen.

“They said the seth gives us work every day, you may not. Moreover, if you leave us, the seth will not take us back, they said,” Shineel recounts.

That is when she came up with the salary idea and told them that irrespective of non-work days, they will be paid a monthly salary. The salaries start at Rs 5,000 a month and go up to Rs 25,000, depending on the expertise and craftsmanship of the artisan. She got two artisans on board.

Today she has 22 artisans working with her, along with a team of eight that includes people in design, online marketing, backend ops, accounting, business development, and supply chain.

In the beginning of 2018 , Shineel’s husband Varun left his job at Mahindra Comviva (where he was looking at CSR initiatives), to join her. At THOA, he is responsible for the supply side of the business, while Shineel takes care of the demand part.

With THOA, Shineel wants to build an ecosystem of people who ‘value, celebrate and propagate imperfections.’ In the future, she wants to create an infrastructure where people can come and experience the products being made and even make their own, along with the artisans. The company also plans to onboard ‘urban artisans,’ who Shineel believes will bring a new mix of materials and design to the table. She plans to raise funds for growth and expansion in the near future but does not have a timeline or a ticket size in mind yet.