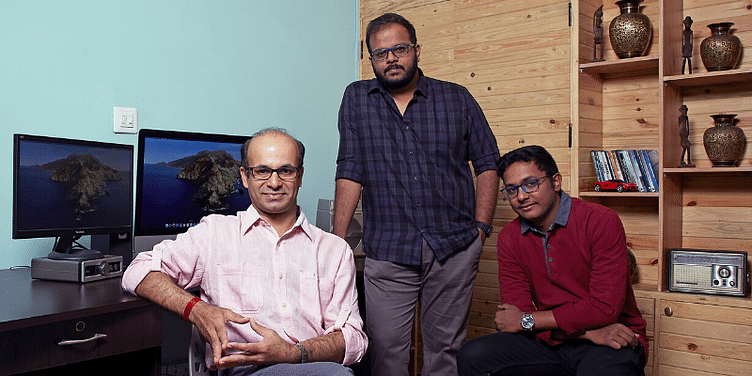 Filmmaker-turned-entrepreneur Ganesh Shankar Raj started MINDIA to curate positive, compelling, and unique stories of India. The startup has brought 100 unknown tales into the limelight till now, and aims to get one lakh subscribers over the next year.

Fiercely brave and loyal, Mudhol hounds are the first Indian dog breed to be drafted into the country’s army. Possessing traits that make them the perfect guard dogs, these animals are known for their graceful features: their athletic and long limbs, slender body, elongated skull, and tapering muzzle.

Not many would know this fact, perhaps — the Mudhol hounds, hailing from the state of Karnataka, also have a long-standing history with royalty. Long before their recruitment into the defence services, the hounds were used by kings and princes as hunting and guard dogs.

Little known as they may be, these magnificent creatures are an integral part of Indian history and culture. Their stories and those of other elements of the country—from the majestic Mysuru Palace to the lore of the ‘chocolate town’ of Ooty—are now being deservedly spotlighted in the form of short, factual, and insightful videos by digital story-telling platform MINDIA.

“Often, wonderful stories get lost in the diverse discourse of this country,” says Ganesh Shankar Raj, Founder and CEO of MINDIA.

MINDIA (pronounced ‘MIND-IA’) is an initiative of its parent company, Inner Eye World Films, a film production house. Started in 2018 by Ganesh (45), along with Sujit Nair (33) and Arjun Kumar (25), it is dedicated to telling these very “unknown, untold, unique, and positive” stories that can change the narrative around India and Indians across the globe.

[UpClose] Why Bengaluru-based apartment security startup MyGate does not consider the entry of ...

From history and culture, to nature and people

The unsung heroes and the influential who’s who ⁠—MINDIA profiles a wide range of Indians from every part of the world, curating and telling their stories. The idea behind starting such a platform was to tie up with up-and-coming filmmakers from across the country to shoot interesting stories that catch the attention of MINDIA’s research team.

“As creative people, we felt that existing media channels, especially international media, focus mostly on negative stories on India and Indians. They generally look for clickbait content based on our country and people.”

With MINDIA, his vision was to get the world hooked to a positive narrative with two to five minutes of storytelling. The startup has been capturing stories in the form of short films, web series, and micro documentaries, touching upon a wide variety of subjects including history, travel, people, nature, and culture.

Says the filmmaker-turned-entrepreneur, “So far, we have filmed about 100 stories across the country, and released about 25 of them on our YouTube channel, MINDIA.”

Archiving the ‘mind of India’

Every time, the startup’s name surfaces in conversations, says Ganesh, people end up mispronouncing it. “We make an effort to correct it,” he continues, adding, “We are thinking of a new and innovative method [to correct the pronunciation of] the name, which will come up in our new releases very soon.”

Explaining why the pronunciation of the brand’s name matters, Ganesh shares that the word, coined by Justus Hultgren, stands for ‘Mind of India’. Justus, who has also designed the logo, is a well-known art director and an advertising professional from Sweden as well as an associate of Ganesh’s startup.

“The logo depicts an abstract and symbolic version of the elephant and, when tilted, depicts a single quotation mark, which we use in our films for the statements made by the protagonists,” the entrepreneur says.

Together, all these elements—as minute and trivial as they might seem—represent what the platform stands for and what it aims to do, which is to tell brilliant, compelling stories of India and Indians. And, so far, team MINDIA has managed to put its most creative foot forward with their visual stories.

From spotlighting the incredible feats of 107-year-old environmentalist Saalumarada Thimmakka aka the ‘Tree Mother of India’, who has planted over 8,000 trees in her lifetime, to tracing the journey of ‘The Saree Run’, an initiative involving saree and Indian clothes as fitness wear — MINDIA has truly captured the essence of India in their archive so far.

The team comprises eight to 10 scriptwriters/research persons, a director, executive producers, and post-production head/editors. The founding trio know each other from working together at Inner Eye World Films.

“I had started Inner Eye about decade ago,” says Ganesh, adding, “Sujit joined as an associate director while Arjun joined as an intern with Inner Eye. When the idea of MINDIA was born, I requested them to be part of MINDIA as their talent, hard work, commitment, and sincerity in their respective fields are hard to come by.”

MINDIA was launched with an initial investment of Rs 35-40 lakh. While it is self-funded, the plan, says Ganesh, is to go to market shortly for fundraising through angel investors. He adds, “We're in the process of determining valuation.”

In the little over a year of its existence, the digital storytelling platform has collaborated with some of the biggest brands in India to create unique, relatable stories that match the startup’s philosophy.

On this, Ganesh says,

“Karnataka Tourism is one of the clients we have been working with, which has helped us to identify the tourism sector as one of our potential business targets going forward. We also have three other potential clients (MNCs) in discussion stages.”

The startup’s stories are definitely grabbing eyeballs. In the past year, MINDIA’s YouTube channel has raked close to 5,000 subscribers, while its videos have garnered more than one million cumulative views and over two million watch minutes. Currently, the startup’s official website is in the beta stage, which once fortified will mark the next phase for the platform: the app launch.

“We are aiming for about one lakh subscribers over the next year,” says Ganesh, adding, “Views for each of our videos range from 20,000 to over six lakh.”

While an increasing user-base is a sure-shot indication of the platform’s growth, what stands out as MINDIA’s biggest distinguishing factor is its brand of storytelling and unique production style, which was perfected after a few hits and misses. Without compromising on the principles and virtues of filmmaking, the team takes pride in filming each visual story in less than a day’s time with a minimal crew.

In the future, Ganesh says his team is looking to focus on producing a web series based on factual stories.

“These will include food-based series, travel series, and five-minute-long micro documentaries based on issues, all in the positive news category,” Ganesh says.

From 1968 Mustang GT to ‘86 Honda Accord: Cars that Ford v Ferrari stars drove before they beca...