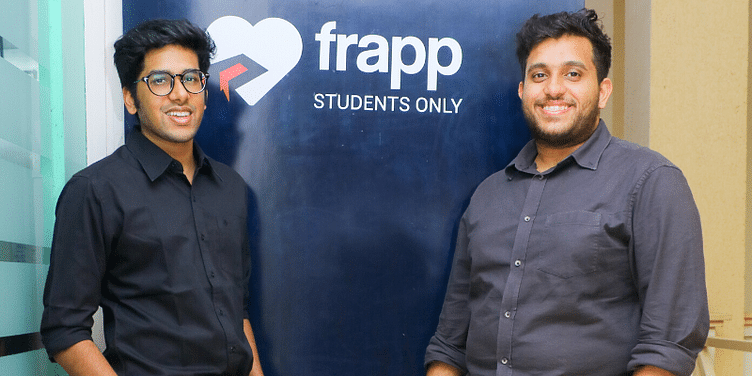 Mumbai-based Frapp was started as a student benefits platform. Five years and a pivot later, the startup is now helping students earn anywhere between Rs 10 and Rs 2,000 per task.

Only if you have walked a mile in the shoes of a student – and mind you, it’s no cakewalk – would you know what a struggle being a young adult is.

The needs at this age are many and the resources to cater to them, limited. It’s a bit of a ‘see more, want more’ conundrum, something that Armaan Vananchal and Niranjan Nakhate, the co-founders of Mumbai-based Frapp are particularly familiar with, having lived the student life not too long back.

The twenty-something entrepreneurs who graduated from the Narsee Monjee Institute of Management Studies (NMIMS) were aware of the gigs scene for students in India, particularly of the difficulties freshers faced in scoring internships. It was, in fact, a sum collective of these experiences and a college project that required Armaan to come up with a business plan that inspired the idea of Frapp.

What started as a platform for student discounts and deals has, today, entered a whole new market altogether, creating part-time work opportunities and gigs for the hundreds of thousands of students in India.

And since their pivot, their business model has expanded its target audience as well, catering to an even larger community that includes freelancers.

Taking the product from ‘India’ to ‘Bharat’

“We started Frapp in 2014 with one vision: to make life for students in India better,” says Armaan, tracing the journey back to the micro jobs days.

He adds, “In our initial days, we built India’s first digital student verification process that enabled brands such as McDonald’s and  Costa Coffee to run student discount programmes.”

In fact, Flipkart and Amazon, regarded among the prestigious names in the ecommerce space, and companies like Gaana, SHEIN, Crocs, and Lenovo still use Frapp’s student verification services, Armaan says.

While the concept was pretty niche, there was one problem – the model was catering to a more affluent audience and it required Frapp to have a hyperlocal presence, which restricted its operations geographically.

Prompted by this realisation and also an understanding of the changing nature of the gig economy and its growing demand, in 2018, the startup made a complete pivot and transcended into the gig and future of workspaces.

The app is now registering over 3,000 user signups per day while enabling people from more than 500 cities and towns in India to complete gigs. It has been a complete turnaround for Team Frapp, to say the least, but one that has proven to be in favour of the founding duo.

As Armaan quips, “Post our pivot, we’ve seen amazing traction and growth in scope and have begun taking our product from India to Bharat.”

Meet the 2 Mumbai entrepreneurs aiming to create employment for 500 speech and hearing-impaired...

Basking in the glow of the gig economy

One in every four freelancers is from India, according to a 2018 PayPal report.

Titled Insights into the Freelancers Ecosystem, the report states that globally India has emerged as one of the largest freelancer markets, poised for further growth. Interestingly, Armaan’s understanding of the Indian economy is also pretty much in sync.

Not only does the 28-year-old believe that the way jobs and tasks are carried out in the economy has changed but also that new jobs are being created in the way of changing marketing and sales processes. In many places, full-time involvement is no longer the need of the hour.

“Businesses want their work to be done faster across different geographies,” says Armaan, adding, “At the same time, we noticed that many companies are actively hiring interns, influencers, ambassadors, and volunteers but struggling to manage them and get a good output. We wanted to productise this and own the delivery on both sides – students and companies.”

On Frapp—which is now a platform for micro jobs and tasks—companies can harness the power of the human cloud by issuing tasks to the distributed workforce while users (or Taskers, as they are called) can complete ‘Missions’ (micro jobs) to earn cash, rewards, and certificates.

“Our platform currently focuses on giving our users access to Missions in marketing,” says the Founder, adding, “We are also foraying into tasks across different categories such as operations, research and social/peer sales.”

The initial idea while building part-time jobs on Frapp was to allow youngsters to earn some additional money so that they can use the offers on the platform. This started with the listing for volunteers for a music festival, followed by sales promoters for Imagica, and a large campus ambassador programme for Godrej.

With this understanding, Team Frapp then started working towards building more interesting part-time work opportunities with their brand partners. Today, the startup boasts more than 300 brands that have used its solution to run micro-jobs and gig programmes. This includes some big names like Samsung, Starbucks, Spotify, Universal Music, GMAC, Puma, and small businesses that build and manage their own campaigns.

It’s not much of a surprise then when Armaan reveals that in the last month alone, more than 100,000 tasks were completed successfully through Frapp. Typically, the payments for these micro-jobs, he adds, ranges across two different categories.

For easy/quick tasks involving low skill requirement and less time, the payment could be anywhere between Rs 10 and Rs 100 while for more advanced tasks, requiring mobility, skill, and time, it’s between Rs 100 and Rs 2,000.

“We currently add over 2,000 users every day who join our platform to look for micro-job opportunities. In the last 18 months, we have added over 400,000 users to our platform,” says Armaan.

The average age of users on Frapp is around 20. And these 20-somethings are not concentrated just in the metros and Tier I cities, nor do they belong to the student class alone.

Says the Founder, “We’ve moved beyond students and also have users from other demographics coming in. We’ve started seeing interest in the platform from freelancers, under-employed youth, and job seekers as well as micro-entrepreneurs.”

That this strategy has been effective is evident in the revenue numbers that Frapp has raked up since the pivot. Before the launch of Missions in May 2018, the company was, more or less, in a pre-revenue stage. But since introducing micro jobs, Frapp has been unit economics-positive for every task that is being completed via the platform.

From deals and discounts to micro jobs and Missions, there have undoubtedly been a great many turns in Frapp’s five-year journey. What started out as a student benefits platform has expanded, both in scope and service, to cater to an entire gamut of task seekers.

If Founder Armaan Vananchal’s words are any indication, the startup is building in the supplementary income generation job space, “where taskers from households with incomes of Rs 15,000–Rs 30,000 per month can earn Rs 8,000–Rs 10,000 additionally using Frapp.”