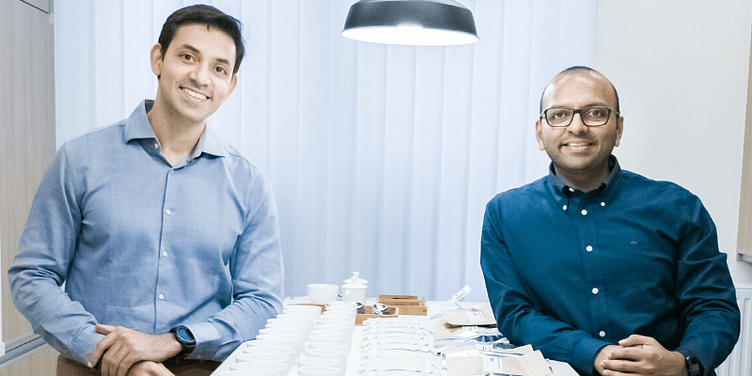 The Good Life Company is filling the gap in the Indian specialty tea and coffee market. The brand is already present in India and the UAE, and soon plans to expand to the UK and EU markets.

Brought together by their shared love for brewed goodness, the story of Mumbai-based Bhuman Dani and Shariq Ashraf is one of serendipiTEA.

The 30-something entrepreneurs are MBA graduates from prestigious institutes. Bhuman has a degree from INSEAD while Shariq from Oxford University, and both have, at some point, worked at global management consulting firm Boston Consulting Group. But Bhuman was based out of London while Shariq was in Melbourne.

Professionally they hadn’t really crossed paths until February 2016, when the duo ended up at an alumni meet in Mumbai. A setup for exchange of ideas and plans, the event served as the perfect launchpad, leading to the inception of The Good Life Company in April 2016.

TGL, today, is a specialty tea and coffee brand retailing at more than 300 outlets across Mumbai, Delhi-NCR, Bengaluru, Pune, and Kolkata. These include popular outlets such as Nature’s Basket, Spencer’s, Foodhall, Le Marche, Modern Bazaar, HAIKO, and many more.

This, the founders say, is only the tip of the iceberg that is their global expansion plan.

Divided by nations, united by tea

India runs on chai, for sure, but the tradition of brewed beverages is not exclusive to the country.

Globally, there are at least a dozen known varieties of tea (and these are just the popular ones), starting from Oolong to Pu'erh, Chamomile, Chrysanthemum, Dandelion, Hibiscus, Matcha, Moringa, Peppermint, Rose, and the more popular green and black tea. The same goes for coffee, which has single-handedly taken western nations by storm.

Hot beverages are, after all, the oldest of brewing traditions. Bhuman, surprisingly, was thousands of miles away from India when he discovered his love for tea.

In London, when everyone else was relishing local beers to their hearts’ content, Bhuman would spend time at the Amanzi tea bar. One thing led to another, and the next thing he knew, he was walking through the doors of the famous East India Company store. At that moment, little did he know that the visit was going to be a life-changer.

“I started to think of this space,” he says, adding, “Since I had no background in teas, I decided to learn under Jane Pettigrew, who is not only a recipient of the famous British Empire medal but also part of the existing UK Tea Council.”

While Bhuman was getting initiated into the world of brewed wonders, his co-founder, Shariq, who has always been an avid tea drinker, was enjoying his own Eureka moment. He crossed paths with Ines Berton, the owner of Tealosophy, South America’s biggest specialty tea company.

It was all falling in place after all - the duo’s journey, their shared passion for entrepreneurship, and their love affair with brews and blends.

TGL was born out of Bhuman and Shariq’s personal experiences, but the founders believe it has a bigger role to play: bridging the gap in the Indian specialty tea and coffee market.

Says the founding duo, “On researching more about this market, we realised that it was primarily governed by geographies rather than brands. People associate specialty tea with Darjeeling, Assam, and Nilgiris while specialty coffee is predominantly associated with Chikmagalur and Coorg.”

This realisation prompted them into building a brand that would become ubiquitous when it comes to specialty tea and coffee. And The Good Life Company, in its very essence, is true to this philosophy.

Interestingly, the startup’s origin was rather humble.

“Shariq and I started TGL out of a coworking space in 2016,” Bhuman recalls. “Today, we are a team of over 170 professionals with offices in Mumbai, Delhi-NCR, and Bengaluru, and a state-of-the-art manufacturing facility in Bhiwandi.”

Their business model comprises at least six different channels of sales, including retail, online marketplaces, gifting, and exports. The brand also has a presence in more than 150 hotels, restaurants, and cafes including names such as Burj Al Arab, Taj, Sofitel, Westin, Grand Hyatt, The Lalit, Indigo etc. In addition to this, TGL is also available at duty-free shops at Mumbai International Airport and at airport lounges and QSRs across Mumbai, Bengaluru, Kolkata, Goa, and Chennai.

Curating a loyal customer base

A startup life is incomplete without unprecedented crisis and operational challenges. For the duo, who bootstrapped The Good Life Company with Rs 55 lakh, this started when they suddenly realised that their brand was growing at a phenomenal rate.

“We grew too fast, too early,” they remember. “While we were extremely happy with the response we received, we weren’t prepared operationally to match the demand. And, we experienced a phase where we had delays in order processing and manual errors in some orders.”

These lags, however, are a part and parcel of starting up. As soon as the brand recuperated from these operational blocks, says the founding duo, they began clocking in the big numbers.

In just 12 months, their revenues grew 2.1X, in 18 months it grew 4X, and in 24 months, 8X. The maximum growth, however, has come from the online business, which has grown 12X in the past five months, as per the duo.

“We already have a loyal customer base across India and the UAE, and have sold around eight tonnes of tea and six tonnes of coffee in the past 12 months,” the founders claim. “We now plan to launch our products on Amazon's US, UK, and EU platforms,” they add.

Evidently, the humble chai and coffee have come a long way, and along with it, so have brands like The Good Life Company. In it’s truly global presence, after all, is reassured our undying love for that hot cup of happiness.

After winning Miss Universe at 22, how Lara Dutta hustled her way to build a beauty & skincare business