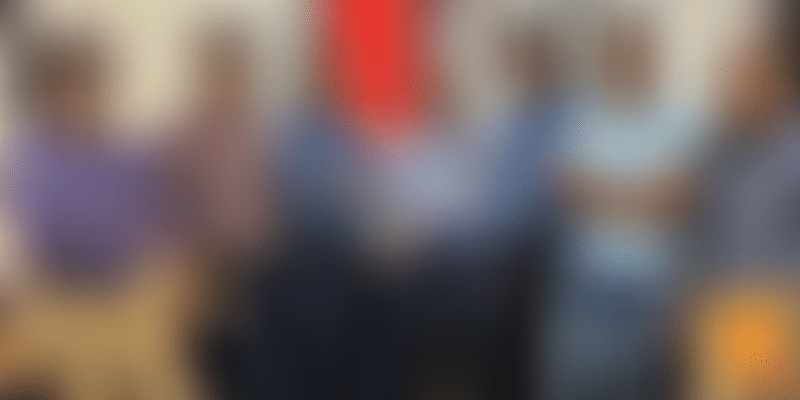 Jaipur-based 100 CF Lab is a tech accelerator and startup studio that looks for potential ideas and co-founders, and then partners with them. The studio's success stories include mPass, mEngage, and Mobzway.

Entrepreneurs in India’s smaller towns and cities lack the guidance and mentorship that startups in metros get easy access to. The government may have initiated challenges and events to boost startups in Tier II and Tier III cities of India, but incubators and accelerators are facilitating the startup boom in non-metro cities.

One such accelerator is Jaipur-based 100 Co-Founders Lab, or 100 CF Lab. Founded in April 2015, the mobile-tech accelerator/startup studio not helps potential entrepreneurs with winning ideas, but also helps them find a co-founder.

Sanjay, a civil engineer from MNIT, Jaipur, started his career at Ansal Housing in Delhi. After working for five years with the real estate company, he decided to take the entrepreneurial plunge.

Sanjay got in touch with a few batchmates from MNIT and built multiple businesses, in the construction and real estate sectors, from scratch. These included Harbinger Design and Engineering and Harbinger Creators and Developers.

“Planning and building different and unique designs gave me a kick,” Sanjay says.

“In 2009, when Jaipur hosted the Global Charter Member TiE Retreat, the idea of setting up an angel investment firm was born over a breakfast meeting,” he adds.

The Rajasthan Angel Innovator's Network (RAIN) was finally launched in April 2012; Sanjay was one of the co-founders and Board members of RAIN.

Once the startup ecosystem in Jaipur started growing, Sanjay realised the opportunities in shifting to a technology-backed venture. However, he was not satisfied with the ideas that startups were bringing to the table.

“I went through hundreds of presentations and discussions on startup ideas, and that helped me understand the nuances of the ecosystem better,” he says.

“Conceptually, we are not investors, but co-create or incubate startups as founders,” he adds.

100 CF Lab has a process called “Idea Banking”. The startup studio hires young associates from different backgrounds to brain-storm ideas. They also look for young potential co-founders (or champions, as Sanjay calls them), who can work on the shortlisted ideas.

The startup studio, which helps in the co-creation of startups,  works on a Massive Innovation Framework (MIF).  This essentially means that it does not “take up any product unless every person of earth is a potential customer”. What this translates into is that a customer, once acquired, should use the product repeatedly, ideally daily.

Selecting co-founders is a structured process. Sanjay personally verifies them from previous associations and contacts through his network.

“I work as an architect for all the incubated companies - from planning and product innovation to providing additional resources and initial investment," he says.

100 CF Lab gets into a 24-month agreement with co-founders, during which they get to engage and experiment with ideas, leadership, and team formation. A typical budget of $50,000 to $100,0000 is allocated to each company, before they are hived off. A startup is hived off when they seek traction, and become sustainable to raise a seed round.

So far, 100 CF Lab claims to have recorded 75 percent success rate. Three of the first four companies are on their growth path, after sustaining 1,000 days since they started.

“When we first started in 2015, we had put up an advertisement in a newspaper for hiring co-founders. That's when Ankit Tiwari got in touch and made it to the final list. He is now the Co-founder and CEO of mPass," Sanjay says.

Mhooter, a community policing app for neighbourhood safety, met with failure. "After getting angel funded and being awarded the most innovative company by Government of Rajasthan, Mhooter could not bear the burn resulting from demonetisation," Sanjay says.

Subsequently, mEngage has raised $275,000 so far; mPass has received funding support from the Government of Rajasthan while Mobzway has been bootstrapped since the beginning.

mEngage has generated Rs 30 lakh revenue so far and is expecting 500 percent growth after having monetised from the patient's end. mPass is expected to grow at a 200 percent rate in the next 12 months. Mobzway, on the other hand, has grown 50 percent year on year and has clocked Rs 120 lakh in revenue in FY19.

The concept of startup studio started 20 years back, but did not catch up until 2011. In the last few years, India has come up with multiple accelerators, including the Growth Story, Smile Group, Ant Farms, Technology 9 Labs, Prototyze, and Digicita. SAP Startup Studio offers a 12-month programme, providing tech mentoring on SAP technologies and dedicated market access.

While most of these startup studio keep majority of equity with them, 100 CF Lab creates milestone-based equity vesting to co-founders.

“We end up vesting more equity in favour of the co-founder's team. Performance-led high ownership structure without any investment from the co-founders makes it interesting and unique,” Sanjay says.

100 CF Lab has opened up Series A funding for mEngage and is in talks with VCs.

Looking back, Sanjay says that he found his mentor in Mike Jones of Science Inc, a pioneer startup studio in the US. Sanjay met Mike at his studio in Santa Monica, CA. “That one-hour interaction with Mike was captured in my memory forever,” he says. And it’s the lessons he learnt then that he’s taking forward with 100 CF Lab.