[The Turning Point] When an apple farmer teamed up with a military veteran to help kiranas: the Jumbotail story 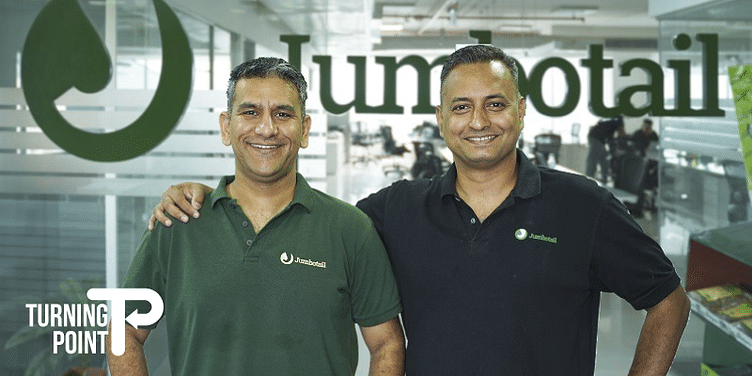 Turning Point is a series of short articles that focuses on the moment when an entrepreneur hit upon their winning idea. Today, we look at Bengaluru-based Jumbotail, a wholesale online marketplace for local kirana stores.

Ashish Jhina, the Co-founder and COO of ﻿Jumbotail﻿, is a third-generation apple farmer from Himachal Pradesh. He was working as a consultant with the Boston Consulting Group until 2014, after which he worked full time managing his family farms. He was also working on a number of supply-side interventions to aggregate apple farmers in his region and connect them with end markets.

Karthik Venkateswaran is a military veteran who has spent a decade in hard combat. Prior to co-founding Jumbotail in 2015, he held the role of Director of Products at ﻿Flipkart﻿ and, previously, Senior Product Manager at eBay in the US. He believes in building products that will make mobile commerce truly relevant to the majority of the next one billion Indians, who have diverse needs.

The duo met at Stanford University during their MBA days and discovered their mutual passion for solving the food and grocery problem in India. After extensively studying the sector and even pursuing their own individual attempts to build solutions for aggregating farmers, they realised that in order to bring about large-scale impact, they would need to start by aggregating demand.

Ashish says, “In every commerce transaction, there are three essential components - flow of information (product selection, quality and pricing), flow of physical goods, and flow of money. Unless all three flows were efficiently addressed, any solution would likely fail, much like numerous other efforts in the past. Therefore, a minimum viable ecosystem is required.”

He adds that this hypothesis has been validated in India’s B2C online businesses where the winners built their own logistics and solved for cash-on-delivery at scale.

Ashish and Karthik launched Jumbotail in November 2015 as a wholesale online marketplace for kirana stores. They started operations in April 2016 with a full-stack model of marketplace, supply chain and fintech built from the scratch, for wholesale food and grocery ecosystem.

As much as 90 percent of India's $700 billion retail market is unorganised, mostly made up of kirana stores. While they may not have the glamour of large stores or online players, they offer unmatched consistency and efficiency.

Yet, one of the biggest challenges for the local kirana is getting its inventory right, as many of the store owners have to travel several kilometres to stock up. Jumbotail tapped into this problem by making it convenient for kiranas to procure a wide selection of staples and FMCG products, and getting them delivered to storefronts using their in-house supply chain and logistics.

In the last four years, Jumbotail has tied up with over 20,000 kirana stores in Bengaluru, and has raised $23.2 million in funding.

The marketplace platform connects customers (food and grocery retailers ranging from small kiranas to supermarkets) with brands and producers of staples and FMCG products through an Android app available in Kannada, Malayalam, Hindi, and English.

"We use our own network of fulfilment and distribution centres as well as last-mile delivery fleet, all powered by in-house supply chain technology. The stack is built specifically for the unique requirements of food and grocery wholesale to deliver orders placed on the Jumbotail app to customers’ storefront," Ashish adds.