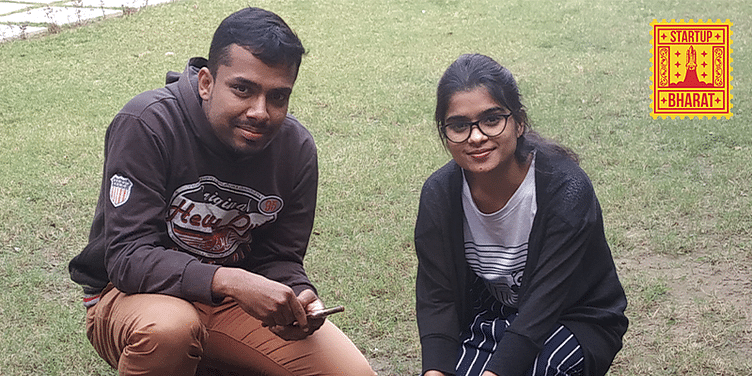 NEERx founders Harsh Agrawal and Nikita Tiwari have developed a sensor called ‘SHOOL’ that can detect properties of soil such as permitivity, soil moisture, conductivity, and temperature

Agriculture is the backbone of Indian economy. However, one of the major problems faced by farmers in India is they are forced to take decisions on farming without any accurate data available to them. Farmers also don’t have real-time knowledge of the soil and crops.

After looking at the available sensors, technologies, and solutions available to farmers, Harsh Agrawal (24) and Nikita Tiwari (23) realised there are very few companies providing real-time and on-field data analytics in India. And the cost of imported and high-end technologies is so high that farmers cannot afford it.

This led them to start ﻿NEERx﻿ Technovation in 2017. The Ahmedabad-based startup develops sensors with an aim to lessen the financial burden of farmers.

“We provide sensing and data analytics solution for understanding microclimate in crop fields. Our in-house developed sensors are embedded in the field based on the crop-type, topology, and location to gather real-time farm data, which is then converted into intelligence for further application,” says Harsh.

According to the startup, the product is currently being used by the Indian Space Research Organisation (ISRO), Indian Agriculture Research Institute, and National Crop Forecasting Centre.

Hailing from Jaipur, Harsh completed his BTech in Electrical Engineering from Nirma University in Ahmedabad in 2019. He says being the vice president of the student association in college helped him develop technical knowledge as well as management aptitude.

Nikita Tiwari, a resident of Ambikapur in Chhattisgarh, has done BTech in Electronics and Telecommunication from National Institute of Technology (NIT), Raipur. Being a part of “Go-Green mission”, Nikita has carried out research and has conducted workshops on sustainable future and the preservation of land cover and climate in the past.

Harsh and Nikita met in May 2017 at SRISTI Summer School on Inclusive Innovation in Amrapur Village, Gujarat, where they both were working on different problems and trying to come up with grassroot level innovations.

Apart from the founders, NEERx currently has five full-time employees, and has an outsourced network of more than 30 people.

“The idea of NEERx emerged when the team got the opportunity to conduct research in Amrapur village in Gujarat pertaining to agriculture as a part of college internship. In two months, we interacted with a lot of farmers just to understand their needs and problems. On our first interaction with ISRO, they threw a challenge to design first-of-a-kind ‘Made in India’ sensor. Our team collaborated with ISRO to do extensive research and build an indigenous sensor, which is now being appreciated across India,” Nikita recalls.

While the seeds to start up was sown in December 2017, NEERx was formally incorporated in September 2019.

It then collaborated with ISRO, Ahmedabad, and was incubated and mentored by CrAdLE, Entrepreneurship development Institute of India, Gandhinagar, Gujarat, in August 2017.

NEERx was later recognised by the Government of Gujarat under the Startup Assistance scheme, and was granted Rs 10 lakh. The grant is being allocated in installments, where the team received Rs 5.5 lakh in May 2018, and the rest will be given in January 2020.

The product – how it works?

Depending on land topology, crop type, and region, the sensors are embedded in the field to obtain real-time data, which is then displayed on an app installed on a smartphone.

In case of Business to Government (B2G) and B2B, complete data is provided on their servers for further analysis, and in case of B2C, clients’ data is enhanced using visualisations through mobile.

“The cost is decided based on the number of sensors per acre, which is dependent on the crop type and topology. The price may range from Rs 70,000 for one acre of land for B2B and B2G customers; while the subscription model would cost around Rs 1,000 to Rs 2,000 per month for individual farmers,” explains Harsh.

The startup generates revenue through direct product sales, including the app called ‘SHOOL SENS’. Acre based installation, advisory, and data generation would also support revenue in B2G and B2B segment. For small scale farmers, a monthly subscription model is being designed to provide FaaS (Farming as a Service) to reach a large number of farmers.

In the B2B segment, NEERx caters to many agro-food companies, and in the B2C segment, it helps large and medium scale farmers, nurseries and greenhouses owners, vineyards and watershed management, automatic irrigation projects, etc.

According to TechSci Research, India’s agriculture market was valued at over $85 million in 2018, and is expected to grow at a CAGR of over 10 percent on account of increasing awareness related to the application of precision agriculture, and the need to ensure yield from limited farm size.

“Our USP is providing the localised farm microclimate information as a whole digitally, and in real-time. The government started the Soil Health Card Scheme in 2015, but the outreach and implementation is not far reached. Also, there is a huge time lag in some regions to get the final testing reports. Few other companies provide data analytics, but the quality of sensors they use are very poor and are not validated. Our sensor SHOOL has been thoroughly tested and validated by ISRO with reported accuracy of more than 97 percent,” says Nikita.

The founders claim that only a few companies provide such data analytics on farm field in India, but have no data validation, and therefore site-specific advisories become less relevant.

“Our major competition is from companies based in the US, the UK, Australia, and Israel, but the cost of implementation is very high. Our technology has better accuracy and low power consumption, which is extremely important, considering the on-field scenario,” says Harsh.

NEERx generated a revenue of Rs 4.75 lakh in FY 20. It is, however, targeting a revenue of more than Rs 50 lakh in the next year after scaling its product.

According to the startup, it aims to reach farmers across India in the future. After placing its solution across various agricultural fields, it also plans to leverage the data as revenue to large companies as well as government organisations.