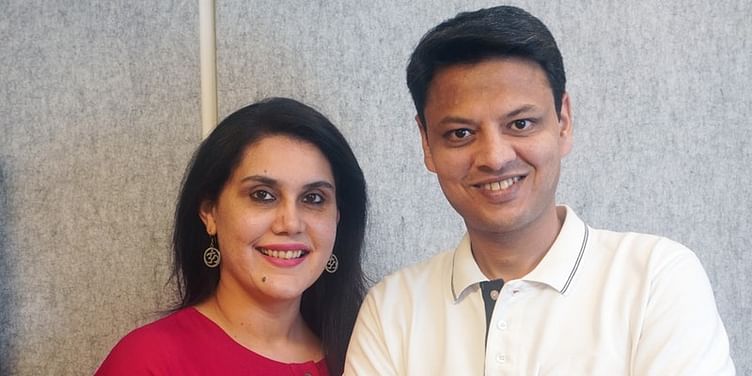 Of the multiple things that India has to offer to the rest of the world, what truly stands out are yoga and Ayurveda. While yoga has made a mark on the global stage, Ayurveda hasn’t been able to reach that far. But Mumbai-based ﻿gynoveda﻿ aims to democratise Ayurveda and its offerings.

Founded by husband-wife duo Rachana and Vishal Gupta, Gynoveda is a tech-enabled platform that focuses on women’s menstrual health.

The startup claims to have built the world’s first MenoBot, a gynaecology robot that uses artificial intelligence (AI) to identify period abnormalities, and then prescribes Ayurvedic supplements to alleviate the issue.

Founder Rachana is also the author of Happiness ki Khoj, and prior to Gynoveda was Head of Customer Experience at Intelenet Global Services.

“I have always been passionate about making a difference in the life of women. I quit a thriving career to become a certified Happiness Coach, and then published my book,” she says.

Vishal, on the other hand, has been the Business Head of Jio, and Vice President at ClearTrip. The couple got together to start Gynoveda after benefiting from Ayurveda personally.

Back in 2010, Vishal was battling psoriasis, a skin condition. When everything else failed, Ayurveda came to the rescue. He was relieved of the condition within 60 days.

“I consumed umpteen allopathic medicines and none provided sustainable long-standing relief. I discovered some audio clips that spoke about the promise of Ayurveda. One thing led to another, and in 2010, I started studying Ayurvedic scriptures,” he says.

After this, Vishal studied “Ayurveda’s Bibles”: Ashtanga Hridayam and Charaka Samhita. “I realised that Ayurveda had resolved 20 gynaecological disorders,” he says.

His awareness of the tremendous potential of Ayurveda as a business, combined with his passion for technology and Rachana’s calling to do something for women’s health and well-being, led to the foundation of Gynoveda.

“Vishal is an intentional entrepreneur; I am an accidental one,” Rachana says.

The founders invested $2 million from their personal savings, as the initial investment.

In 2018, Vishal and Rachana had invested in a Mumbai-based Ayurveda clinic. “The number of young girls visiting the clinic, but being hesitant to speak to a male doctor was large,” Rachana says.

Vishal and Rachana decided to build Gynoveda as a digital platform to make it more accessible.

“An offline model can only cater to the women staying near the clinics,” Vishal says.

Surprisingly, Gynoveda secured its first customer even before launching its website. A woman from Siliguri contacted Rachana for her 18-year old daughter’s PCOD (Polycystic Ovary Disease) problem, after reading about Rachana’s article on an online portal.

“Our labels were not even ready, but she insisted that we send  the Ayurvedic supplements to her,” Rachana recalls.

Now, the startup identifies and sources the most potent herbs from the top eight manufacturers in the country. The supplement manufacturing is outsourced by partnering with manufacturers from Kerala, Karnataka, Gujarat, Himachal, and Tamil Nadu. Formulation and packaging is done in-house, under Aarati’s expertise.

On visiting the website, a user has to answer 20-odd questions about her menstrual health.

“These 20 questions are shortlisted from a list of 40 questions that any gynaecologist across the world would ask. We researched for three months to come up with these questions,” Vishal says.

Vishal built the bot and hosted the test in a private space, running Facebook ads across the country, and requesting women to take it.

After receiving responses from almost 60,000 women across the globe, the test has now reached 85 percent accuracy. The period test takes three minutes.

These 20 questions act as a prognosis, scanning the reproductive system of the user. Once the test is done, it provides information about the disorder. For example, if a woman is diagnosed with PCOD, Gynoveda would showcase the root causes of PCOD, what Ayurveda says, and how it can benefit the patient.

It also provides users with a hotline, MyGynie. Users get to chat, call and consult on the phone, and share their test results with Ayurveda experts.

Once all doubts are cleared, Gynoveda lists treatment packs to solve the respective health issues.

“We made a prognosis state before diagnosis. We want to democratise prognosis, knowledge, and finally offer Ayurveda-powered herbal supplements to disrupt the gynaecology space,” Vishal says.

According to a report by IMARC, the Indian Ayurvedic products market is expected to grow at a CAGR of 14 percent during 2019-2024.

While there are numerous brands monetising Ayurvedic supplements for various deficiencies and health issues, Vishal says, “We don’t see any competitors in the space. We see a lot of contemporaries and collaboration possibilities.”

The startup does not have any subscription model at present, but the founders are thinking on those lines.

For the next two years, Gynoveda plans to focus on further expansion in India itself, targeting women between ages 14 and 45.

“2020 is going to be all about scale. Two years later, we plan to go global,” Vishal says.