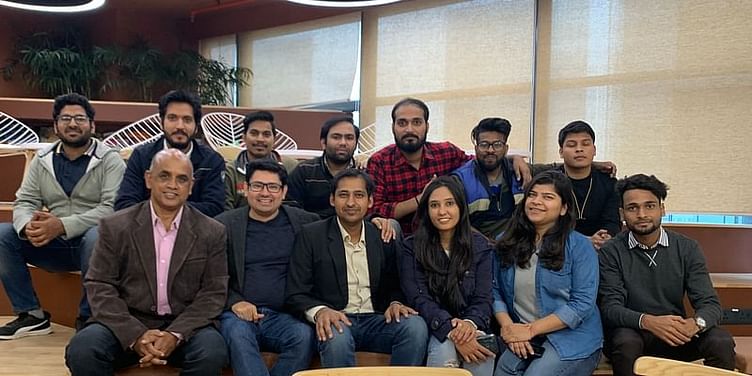 Experts around the world agree that social distancing is a vital part of avoiding the deadly coronavirus. It is, perhaps, one of the very few tools we have today to fight the highly contagious COVID-19 virus. The disease is spread through airborne particles, and by touching contaminated surfaces. As of May 4, the total number of COVID-19 cases in India was 42,533, with 1,373 deaths reported.

While the CDC recommends maintaining at least six-feet distance from others, WHO recently said a three-feet distance should be adequate.

Their directives are good-to-know facts, and easy enough to follow when you’re walking on a relatively quiet street, without too many people around. But how do we socially distance ourselves while buying essentials, or even at the workplace?

That is a question Gurugram-based ﻿DROR﻿ wants to help people answer. Founded in July 2018, DROR primarily focusses on solving the problem of personal safety in India, particularly for women, children, senior citizens and tourists. After beta-testing for almost two years, it launched its app in March 2020.

However, after the outbreak of COVID-19, the company decided to add features to measure social distance so people can keep a safe distance from each other, and reduce the rate of coronavirus infections.

An alumnus of NIT-Calicut, and London Business School, Dhiraj Nauhbar was in Dubai in 2018, when he and his friends – Gopi Latpate, Vivek Nauhbar and Ashok Singh Negi – were discussing India's struggle with personal safety.

“Safety issues were regularly discussed in newsrooms, and candle marches were an everyday occurrence,” Dhiraj says.

After thoroughly researching existing technology solutions that could assist in preventing, or recording threats to personal safety, Dhiraj realised that they all largely focussed only on ‘SOS’, which was a low incident feature, and one that not many would remember using in the face of danger.

That’s when DROR – a personal safety app to help citizens in distress by building a community-based network – was born.

Dhiraj resigned from his job to work full-time on the app, while Vivek and Ashok helped him with the conceptualisation and financially contributed to start the business, Gopi is the prime investor in the company and the chief mentor.

“DROR means freedom in Hebrew, and it is also the name of a bird which signifies freedom. Essentially, the DROR Safety App seeks to provide freedom from issues of personal safety,” says Dhiraj, who has over 15 years of experience in leadership and strategy roles in companies including TATA Motors, Maruti Suzuki, and Ginger Hotels, among others.

Available for Android and iOS users, DROR offers multiple safety features, depending on the situation. For example, its ‘Track My Trip’ features enable users to create a trip, ‘to’ and ‘from’ a place. These trips are motored by human surveillance from DROR’s ‘command centre’, which works on advanced GPS surveillance systems.

“In case of any route deviation by a cab driver, a notification immediately goes to the users, and our command centre. The user’s emergency contacts are also informed,” Dhiraj says. DROR’s command centre assures it maintains the privacy of its users, and the information it collects.

Its latest feature to help people maintain a safe distance from each other uses Bluetooth technology to locate any mobile devices near the user, and calculates their ‘Social Distancing Score’, based on an artificial intelligence (AI) and machine learning (ML)-driven algorithm.

Coronavirus: 8 tools and resources to guide you on COVID-19

This provides users with their real-time social distancing score in terms of percentage distancing and assigns a ‘grade’ – excellent, high, moderate, low, and very low. It also alerts users if they’re in a crowded place and are likely to come in closer contact with other human beings.

To gamify and encourage social distancing, DROR recently partnered with digital wallet startup MobiKwik, which, based on the social distancing score of users, will award Rs 5,000 to a few lucky winners with the highest scores, at the end of the lockdown.

The app is similar to the government of India-released app Aarogya Setu, which alerts users when they come within six feet of a COVID-19 positive patient. DROR, on the other hand, alerts a person as soon as they come within less than two feet of any person, regardless of whether they have the coronavirus or not.

DROR also has a ‘report incident’ feature, where users can rate how safe they’re feeling in a particular location, and have someone from the command centre track their movements, in case they are feeling vulnerable, or at risk.

The company deals with all SOS alerts on an urgent basis, and, once they receive such a notification, the DROR command centre immediately gets into action to help. The user first gets a call from the Command Centre to check the intensity of the emergency. If the call goes unanswered, the user’s emergency contact is contacted. In case of emergency, DROR informs the local police station.

Using these crowd-sourced location tracking data points, DROR also creates ‘heat maps’ for other users, marking the safe and unsafe areas in a particular city. For now, though the startup has disabled the ‘safety heat map’ feature so that users don’t confuse it with the COVID-19 heat maps. The service will be resumed after the lockdown lifts, Dhiraj clarified.

The business of safety

DROR currently has a freemium revenue model. It charges Rs 30 per month for the premium services, which includes ambulance connects during times of emergencies. The feature is available in 21 cities, in partnership with ambulance-booking service Medulance, which has over 5,000 ambulances.

It also has on-road assistance for its users in Delhi-NCR – a region regarded notoriously dangerous for women and children.

DROR was initially launched as a B2B platform, and its first clients were startups including Impact Guru, India Accelerator, and ﻿Lawyered﻿, among others.

“We are still in active discussions with a few large companies who are keen to avail our solution,” Dhiraj says.

Over the last two months, the startup has been recording a growth rate of more than 10X in app-installs, and its social distancing feature has been a huge success. So far, the platform claims to have helped 1,200 families.

In December, DROR had raised an undisclosed amount of funding from IP Ventures to strengthen its tech platform and acquire users. So far, the company has raised a total of $300,000.

With the number of smartphone users in India set to rise to 859 million by 2022, from 468 million in 2017, according to a study by the IBEF, DROR says it sees a huge market potential.

The startup competes with the likes of Bsafe, ﻿Life360﻿, and Saudersaf. However, Dhiraj believes he has something different to offer:

“DROR’s focus is on delivering a comprehensive solution for personal safety, ranging from safety app to safety devices and safety champions on ground, in the future,” he says.

The company aims to be a household name in India for safety, and is developing more and more innovative solutions to address safety concerns for women, office-goers and others.

“DROR is constantly seeking support from the investor community who are committed to the cause of personal safety in India,” Dhiraj adds.