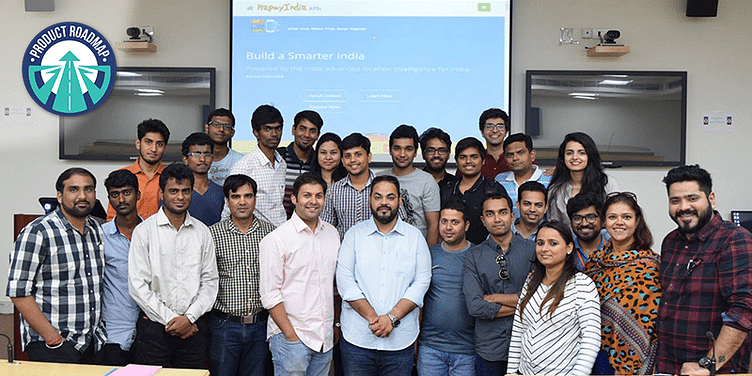 A product roadmap clarifies the why, what, and how behind what a tech startup is building. This week, we take a closer look at MapmyIndia, which offers digital map data, telematics, and location-based SaaS and GIS services, and is now making waves with Move.

When Rashmi Verma and Rakesh Verma started CE Infosystems in 1995, they realised that India didn’t have a map-reading culture unlike the US. However, the duo believed that close to 80 percent of all data would have a location component in the future. This led them to invest Rs 50 lakh of their savings and start MapMyIndia in 1995.

The co-founders, who had seen and experienced the efficacy of digital maps across business, governance and product/service delivery, wanted to do the same for India. The idea was ahead of its time, but the duo went on to build the most comprehensive, accurate, and highly localised repository of mapping data.

The company has grown with location technology, specifically in the areas of navigation, tracking, IoT, and analytics to provide products, services, and solutions to over 10 million end users – consumers, enterprises, and governments.

But how did it build this revolutionary product?

Rohan Verma, CEO and Executive Director, MapmyIndia, says the company has been on a mission to make the world better through digital maps and location technologies, driving phygital transformation amongst enterprises.

Rohan, the founders’ son and an electrical engineer, joined the business in 2004 and worked his way up to CEO and Executive Director.

Since the late 90s, the company has been developing technologies and solutions with a focus on proprietary digital maps data of India – comprehensive, accurate, and fully compliant with India’s legal requirements.

“These are highly accurate industry-grade maps and have been made available to the general public free of cost throughout our journey,” Rohan says.

At the time that MapmyIndia started operations, no one had any idea of how the mapping universe would evolve. The first step towards building the MapmyIndia Move app was collecting mapping data manually, using hand-held GPS devices, a digital camera, and a laptop. People walked down streets and roads across India for this.

“This happened in phases as we kept getting projects from various customers, including Coca Cola, Essar Cellphone (now Vodafone), state and central governments, institutes, government-affiliated bodies, and more. We kept updating and upgrading our map repository. Till date, we have worked with more than 5,000 enterprises,” Rohan says.

In 2004, after close to a decade of mapping India, Rohan, who created the initial website, says the team felt confident that a comprehensive navigable map of India could be released to the public at large. He explains printouts could be taken of the route specified, with street-level navigation from “anywhere to anywhere in India”.

In 2007, the company launched MapmyIndia Navigator, one of the first personal navigation devices in India.

”This put the power of mapping in the hands of the public. It was handy, could be carried anywhere and used by anyone – in a car or otherwise,” Rohan says.

Rohan says the team kept updating and adding to their mapping data, courtesy their other projects. Most car manufactures were by now realising the value offered by the built-in, real-time navigation into OEM-supplied car AV systems.

The navigation also helped do a POI (Points of Interest) search across categories like ATMs, hospitals and clinics, restaurants etc. It would guide you to the neatest POI you selected, and also show others on the route.

“The resultant rich data was now made available to people via our website MapmyIndia.com. As a result, we were able to launch of the first version of our app, MapmyIndia Maps. This was when the Move app, as you see it today, started taking its existing form.

“It used to stream data from our servers but there were accessibility issues due to that time’s patchy internet. This was sorted by offering India’s first offline maps; these could be downloaded into the mobile phone and there were no problems if you hit a dead zone,” Rohan says.

However, the ride till that point wasn’t easy.

Rohan says the first learning was a bit harsh: “People in India don’t use maps." The company had to help them understand the utility of maps and the important role they could play in making their personal and professional lives convenient, efficient, and productive.

This was done by in-car navigation systems. These showed users how live navigation worked, and MapmyIndia kept adding to the product as technology and internet progressed.

The platform-agnostic company aims to deliver a solution to users anytime, anywhere, and on their preferred platform. An app seemed the way ahead as mobile phones became ubiquitous and smarter. And the seeds of Move were sown.

The Move platform has been designed to be scalable in use but to evolve with technological advancements. The IoT devices feature is testimony to that. This flexibility is also key to the success of Move, which distills the best of MapmyIndia’s tech and insights developed over close to two decades. The platform is therefore ‘Built to Last’.

“A paradigm shift was needed to bring about a digital revolution. However, there was little motivation as you usually find someone to guide you at roadsides and pitstops. GPS then seemed like an acronym for Gully Positioning System. Our efforts and our GPS navigation bundled with value-adds drew in customers over time as they realised how unsafe, unreliable, and inefficient the earlier way of functioning was,” Rohan says.

MapmyIndia Navigator proved to be the clincher. The team loaded it with the best digital maps of India along with a combination of utility and cool features like ebook reader, photo storage/viewing, movies and songs, photo frame, predictive search etc.

“This product made MapmyIndia a household name in India. The curiosity and utility worked well for the product. We also kept upgrading our maps data, based on user feedback. Map updates were regularly released. Initially, these were quarterly releases, then monthly; now, they are ongoing,” Rohan says.

The team also introduced connected features like traffic updates into the app (then called Maps).

In 2019, combining the power of digital mapping, IoT, tracking, telematics, and the best of location tech, the team launched MapmyIndia Move, its flagship super app platform.

“This is the amalgamation of more than 25 years of work and innovations at MapmyIndia. The power of Move is not just limited to navigation from point A to point B. It is a one-stop solution for all your location needs,” Rohan says.

What does Move do?

In its current form, MapmyIndia Move offers many useful features:

Mercedes Benz, one of the leading car companies in the world, is offering the MapmyIndia COVID-19 India Guide as part of the OEM offering to its customers.

The company has also developed a set of tools to help organisations safely reopen amidst the nationwide unlock process. These help ensure the safety of employees, consumers, vendors, and other stakeholders by helping gauge:

MapmyIndia has also reimagined and reinvented Mobility and Maps to build a unique C.A.S.E. suite of automotive solutions. The cloud-connected software and hardware components form a bridge, seamlessly linking your car, gadgets, and the outside world, helping develop the kind of intelligence that will enable your car to talk. This can be used by OEMs and delivers a highly personalised C.A.S.E. experience to customers. The team will soon be working with OEMs.

The platform connects the vehicle to the user’s gadgets, cloud, MapmyIndia servers, Move gadgets, sensors etc. This is the glue that binds the ecosystem, generating live, real-time updates and diagnostics, and delivering safety, efficiency, and an enriched experience.

The C.A.S.E. platform is equipped with Advance Driving Assistance (ADAS). It is not just aware of the current location, surroundings, and path, but also of any upcoming obstacle/danger, prompting the driver well in advance to take preventive action. In case of emergency like the driver not being able to apply brakes in time, the car autonomously applies brakes.

The vehicle is equipped with self-diagnostic capabilities and can monitor its health, part failure, predictive maintenance, and battery parameters.

MapmyIndia is now also looking at shared mobility or ‘mobility as a service’.

“The next wave of growth in the automotive segment may not come from retail sales, but from fleet sales. Changing mindsets will force automakers to adapt and modify their product offerings. App-based cab aggregators will need to adopt new technologies to create credible service differentiation. The offering should be high on experience, as efficiency, speed, and accuracy would be vital,” Rohan explains.

Electric is another key focus area, and MapmyIndia is already equipping vehicles with EV charging station locators. The feature enables users to locate the nearest charging station with a compatible plug. Users can book a slot, and also know whether it is a fast-charging point or a slow-charging one.

“State-of-the-art Spider Maps will tell you the maximum your vehicle will be able to travel with the current charge. Armed with this intelligence, your vehicle will suggest the best path to be chosen. In case the destination cannot be reached by taking any of the alternate routes, it will guide you to the nearest charging station,” Rohan says.