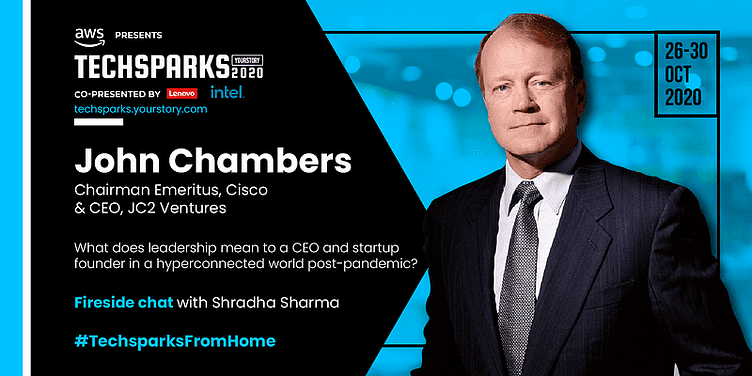 John Chambers, who guided Cisco, a legendary technology growth company, through one of the worst slumps in its history, is no stranger to challenging dynamics. His journey as a CEO saw him building Cisco from a $70-million-valued company to a $50 billion+ tech giant when he stepped down.

He was one of the earliest believers in an Internet-centric world. His vision for the future captivated individuals, businesses, and governments, all of which would go on to work faster, more efficiently, and more enjoyably — thanks to Cisco.

One of the highpoints of his career was in March 2020, when Cisco’s stock market value reached $555 billion, briefly making it the most valuable company in the world.

During his tenure as the CEO, 10,000 employees of Cisco became millionaires.

There were tough times too. In 2001, investors slashed Cisco’s stock price by more than 50 percent in the first three and a half months of the year, knocking it off from the list of the 10 highest market value US companies in the face of a severe slump. But deal with it, he did, as he went on to say, “I learned a long time ago that you deal with the world the way it is, not the way you wish it was. This is where you develop character.”

John always had an eye for innovations, made big, bold, and early bets on video conferencing. The long-time Cisco CEO, who retired in 2017 after 20 years at the helm, had always maintained that internet-enabled video would become an indispensable mode of communication, which it has. And how.

In this never-before virtual fireside chat with YourStory’s Shradha Sharma, at TechSparks 2020, John Chambers shared what it takes to be a leader as a CEO or startup founder in a tough dynamic.

“Everybody loves talking about their success. And that is true of me as well,” said John in response to Shradha asking him about what were the things he did right that young CEOs could learn from.

“It's about mission and vision for your company, building the leadership team to execute that, and periodically making changes in the leadership team. We have had the good fortune to grow from 70 million to 50 billion in sales, and creating 10,000 millionaires among our employees. However, it’s important to have the vision that when things are going well, not to become overconfident, or develop a sense of entitlement. You've also got to constantly change and reinvent yourself. We did that again and again – through seven economic downturns,” he added.

“On the negative side, I made mistakes. One of the common mistakes was letting my relationship with my team members get in the way –– that if somebody was really working hard and giving it everything they got, but couldn't get their job done. I kept giving them more and more time. A certain amount of that is important. It's important to culture, but over time, it becomes my problem,” he sayid.

On leadership being lonely

“In 2001, I got knocked on my tail pretty hard, going from being the most valuable company in the world, to people wondering if I should be running the company,” said John, contextualising the time when Cisco’s stock took a massive tumble.

“It's lonely, and leadership is lonely. But you have to say, here's my plan, think through it carefully, get advice from the people you respect. And then move with speed. Navigating through that gives you an inner confidence that makes you very tough to beat later,” he added.

Reminiscing on what went wrong, John said, “My mistake was I kept relying on numbers from the past 40 quarters that had never let me down. It meant that I had a process that works well. However, it failed me in 2001. All of a sudden, my business went from 70 percent growth in the first week of December to minus 30 percent in the third week of January. That doesn't happen. But it did. And so we were in freefall,” he added.

[TechSparks 2020] We want to build a world-class company that is profitable and sustainable, says Ola's Bhavish Aggarwal

During that tough period, when many of his peers in the industry, shareholders, employees, family, and even the very media, which had once referred to him as the best CEO in history, were beginning to have doubts about his ability to lead.

“We needed to adjust quickly. We did in 51 days, and moved forward. I told myself that we'd come out of it – our company would come out of it and continue to be a great company, and that I'll be a much better leader because of it. What started off as the worst year in my career actually became my best year as a leader,” he said.

On thriving in a tough dynamic

“The first thing is to survive. What you got to do is pivot and move to growth,” said John about powering business continuity in a tough market.

“Out of 18 startups, I have all of them made changes in February-March. And in April, we started to gain market share.”

“We moved from playing defense and survival to offense. And now we're breaking away. Even if we're in the slow industry grow segment, we're breaking away from our peers. That's the classic Silicon Valley two-step. I encourage all the viewers to try it. It's what every major company has gone through – companies who have not only survived the downturns, but became a Cisco, an Amazon, a Google or a Microsoft,” he said.

“Leaders have to grasp your company and be the lead of the dog sled, if you will, setting the pace everybody can keep up, but not so at a faster pace where people break down,” he said.

John is also a firm believer in the adage ‘Praise in public and criticise in private.’” If you've got an issue with what one of your peers are doing, either go directly to them and address it, go to their manager or go to the CEO. Don't share it with other peers. Don't share it with your team – that gets internal politics going. It puts more stress on the company than external factors can ever do,” he said.

Unconditional love for your team

Unconditional love for the team is quite possibly a very unusual turn of phrase for a CEO, but not for John who said, “I love my team. Unconditionally. We are one family, with one vision. If you take one of us on, you better be prepared to take all of us on,” he said.

The importance of creating replicable playbooks

“I'm a huge believer in replicable playbooks, much like a professional cricket team or basketball team or a football team in the US does. And because you have players who know their roles, you can run with speeds that others can't. So I had to build playbooks for almost everything I did,” said John.

“How do you even digitise a country like Prime Minister Modi is doing in India? How do you make smart cities, healthcare, education, and inclusion across 29 states and seven territories? The answer is a playbook,” he said.