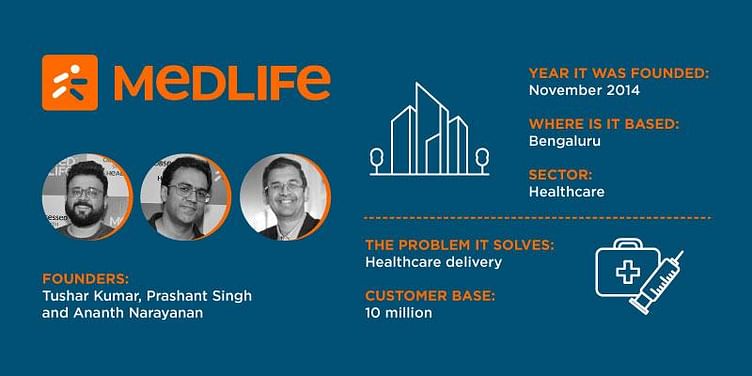 With over 10 million customers across over 4,000 cities in India., Medlife aims to make healthcare accessible and affordable in the country by bringing doctors, pharmacists, phlebotomists and consumers under one digital ambit.

Riding on the back of tech-led innovation like telemedicine and preventive healthcare, the Indian healthtech market is estimated to reach $21 billion in 2025. As India’s masses increase in affluence and awareness, they are demanding access to better healthcare. This development in the Indian healthcare delivery infrastructure is being led by homegrown healthtech startups. According to a recent RedSeer report, the Indian eHealth sector is projected to grow by around 13x, to become a 16 billion dollar opportunity by FY 25.

One organisation that’s innovating for the healthcare delivery system in India is Medlife, an online pharmacy that aims at making healthcare delivery simple, accessible and affordable. To ensure this, Medlife has brought together doctors, pharmacists, pathological labs and consumers on a single platform.

Medlife has three business verticals – pharmacy, diagnostics, and e-consultation – and offers services in more than 29 states, seven Union Territories, 4,000+ cities and over 25,000 pin codes across India.

Being a trusted partner for over 10 million customers

The healthtech sector in India is highly competitive, with several players. Medlife, as India's largest e-health platform, has leveraged technology to become the trusted partner of 10+ million customers.

While Medlife’s consumer business began with the simple premise of delivering medicines to customers at discounted rates, as the business expanded to include multiple verticals such as diagnostic tests, online consultations, health products and much more, the complexity of their log analysis and volumes increased.

With growth came log complexity for Medlife. “Besides the added categories, the flow for ordering medicines itself evolved into complex forms with the addition of multiple features such as subscriptions, express delivery, ordering medicines without a prescription, and substitution. Medlife needed to shore-up its application debugging game and decided to look for a cloud-based machine data analytics partner,” says Pranesh Vittal CG, Associate Director - Database & DevOps, Medlife.

Medlife has over 100 employees across its DevOps, Product Development and CX teams. They were seeing challenges with the time taken to debug the issues on production and wanted to move from a reactive to a proactive mode when it came to handling production issues.

What made Sumo stand out against the competition

In addition to cost efficiency, time-saving features, ease of use, effectiveness and the stability of the Sumo Logic solution, its ability to handle multi-line log lines without having to do anything out of the box, coupled with the ease of the setup, worked in favour of Sumo Logic. After evaluating multiple solutions, the team chose Sumo Logic, which emerged as the best fit for MetLife's enterprise observability requirements.

“The time saved for debugging stands out. We've been able to reduce MTTR to a significant extent and this has directly resulted in the stability of our systems and in turn helped us reduce business loss. We've also been able to keep the costs of log ingestion under control and take preventive measures whenever it would increase beyond our quota,” says Pranesh.

Medlife’s topmost priority was to be proactive in case of any issues. “We wanted to be the first set of people to know in the event of an issue, and we've been able to achieve the same. We also wanted to quickly debug any issues in production and roll out fixes for the same at the earliest. Finally, we were able to do the canary release during the daytime even during our peak business hours and we're able to do it by carefully observing the logs, error rates on the SumoLogic dashboards,” says Pranesh.

“The Sumo Logic platform is rock-solid, easy to use and offers proactive monitoring. We have access to their Professional Services whenever we encounter any issues with the platform. We do have a monthly cadence call to discuss issues if any and solve them on a need basis. They also help us in giving updates about any of the new features that are launched and help us in onboarding these new features.” says Pranesh, speaking about the deployment experience.

On being asked if he would recommend Sumo Logic to peers, he adds, “Yes, absolutely. We've seen the benefits of this tool and it has helped us a lot in terms of debugging issues in real time and also helped in proactively fixing any stability issues.”

Sumo Logic Inc., (NSDQ: SUMO) is the pioneer in continuous intelligence, a new category of software, which enables organizations of all sizes to address the data challenges and opportunities presented by digital transformation, modern applications, and cloud computing. The Sumo Logic Continuous Intelligence Platform™ automates the collection, ingestion, and analysis of application, infrastructure, security, and IoT data to derive actionable insights within seconds. More than 2,100 customers around the world rely on Sumo Logic to build, run, and secure their modern applications and cloud infrastructures. Only Sumo Logic delivers its platform as a true, multi-tenant SaaS architecture, across multiple use-cases, enabling businesses to thrive in the Intelligence Economy. For more information, visit www.sumologic.com.