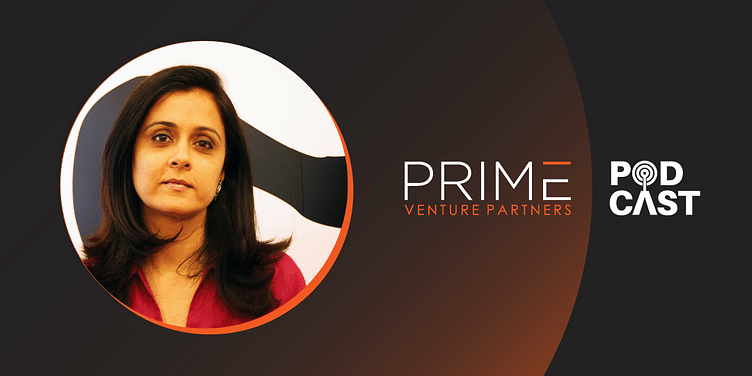 In this episode of Prime Venture Partners Podcast, Meeta Malhotra, Founder, The Hard Copy, explores the power of personal branding for founders, and how to build a brand narrative for a startup.

Meeta Malhotra is the Founder of The Hard Copy, an online publication that chronicles the design and innovation ecosystem in India. A serial entrepreneur and brand strategist, she also comes with corporate experience that entails her success.

Meeta started her career in Infosys when they were just starting up, after which she became one of the two partners at Ray and Keshavan, India’s leading brand and design consultancy in 2000. However, in 2009, she decided to embark on her entrepreneurial journey and co-founded Kinetic Glue, a SaaS company, which was later acquired by BMC Software, a Fortune 500 Company, in 2013.

After this, she moved on to start another company named Varana Design, a sustainable luxury fashion brand, with a store in Mayfair, London, making The Hard Copy her fourth venture.

In the recent episode of Prime Venture Partners Podcast, a series featuring the makers and doers of the startup ecosystem, Meeta Malhotra, in a conversation with Amit Somani, Managing Partner, Prime Venture Partners, explored the power of personal brand for founders and how to build it for a startup.

Why ‘Branding’ is misunderstood?

According to Meeta, branding is often misunderstood. She said, “We confuse branding with frameworks and charts and all sorts of geometric shapes, but branding is never about the name or the tagline. As Jeff Bezos put it – brand is everything people say about you when you are not in the room.”

When asked whether people have awareness of what their brand stands for, she said, “I think that a good way to start with your brand before you employ consultants or marketers or anybody is just ask five or 10 of your customers what they think of the company.”

“The pattern that you see in their answers is your brand narrative currently,” she said. Meeta was also quick to note that most founders think that branding is this massive, expensive, and resource-draining project, but it is actually quite simple. “If you don’t shape your brand narrative, then somebody else will do it,” she said.

Why founders are reluctant to build a brand

Meeta believes that founders are often reluctant to spend time for their branding. She narrows this down to two reasons - “One, there are a set of founders who think that branding is not important as they are already occupied with a whole lot of other tasks. And two, there is another set which identifies that branding is important, but are scared of being judged.”

According to her, branding is important. “If you are not saying anything about your product or company, someone else will, over whom you have no control. Instead, start stating your visions about your company on Twitter or a blog. And even if one person reads it and gains some insight, know that you have started a ripple.”

Building a brand and measuring it

Further into the conversation, Meeta delved into the importance of frugal marketing by stating that building the brand doesn’t need big bucks. She then highlighted a few easy steps to execute this procedure.

“Start by sitting with your team and get your story right about what your brand stands for. Then, dig into the following three things as you build – what you stand for as a founder, what space you are building your company in, and what you mean to your customers. Once done, get out there and talk about these,” she said.

Mohandas Pai on the massive market opportunity of Digital India

Additionally, to measure the success of a campaign, she suggests that founders should keep an eye out for organic traction. “You will sense there is a little more engagement, a little more queries from your customers, and a little more talking among people about you. And you have not spent a dime for them. You will get the message that it is working.”

Talking about the need for B2B marketing, she said, “You need to do it. As long as we’re pitching our sales to humans, you will definitely need marketing.”

B2B or B2C, humans have this habit of forming perceptions about your company. You can only break it through proper branding and marketing, she added.

From story designing to storytelling: how brands should engage with customers

The future of branding

Meeta pointed out that the ecosystem has now landed in an age where the screens are no longer rectangular like TV. Further elaborating on that, she says that designs will change with time and the advancements that come with it.

“Branding has to modify itself to suit mobile phones as that is where customers are spending most of their time.”

She also briefly spoke about some of the latest technology that are an integral part of today’s world – Artificial Intelligence and Augmented Reality – both of which occupy an intelligent position in the marketing realm.

“I think if your fundamentals of design are in place and solid, then you’re not going to be thrown off guard by changes in form factor,” she said.

You can listen to the podcast here.