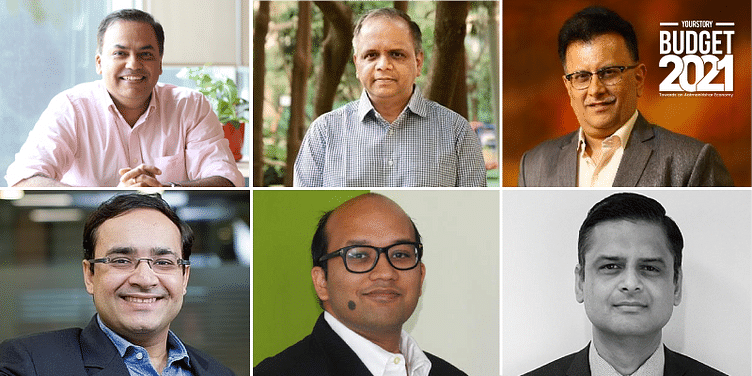 Ahead of Budget 2021, lower taxes, easing of regulations to encourage foreign investments, and incentives for the edtech sector are some of the expectations that startup investors have from the finance minister.

As COVID-19 upended businesses worldwide in 2020, Indian startups were not spared. Investments shrank and many resorted to layoffs, furloughs and pay cuts to keep their businesses afloat.

With just over a week to go for the Union Budget, the startup ecosystem expects Finance Minister Nirmala Sitharaman will take steps to reduce taxes and ease regulations to encourage foreign investments, while giving sunshine sectors such as edtech a further boost.

YourStory speaks to startup investors to gauge their expectations.

Some investors say the Budget should boost consumption that took a beating as restaurants, shopping malls and theatres, among other businesses, remained hit by COVID-19 restrictions for most of last year.

“After a tough 2020, we are hoping for a strong consumption-led Budget, with a good focus on encouraging startups, which have a multiplier effect on the economy as well,” says Pankaj Makkar, Managing Director of Bertelsmann India Investments.

Another expectation is that the government takes a more active role in relaxing regulations on the goods and services tax (GST) and foreign direct investment (FDI) to make it easier to do business.

GST rate cuts can become one of the biggest Budget reforms for startups, says 100X.VC Founder and CFO Yagnesh Sanghrajka.

“As most services attract 18 percent GST, it makes pricing less competitive for a majority of startups and, thus, difficult for them to scale optimally,” he says. “To resolve this, the government should make DPIIT (Department for Promotion of Industry and Internal Trade)-registered startups a special category for lower GST rates. Bringing the figure down to about 9 percent should give them good headspace to grow.”

Given that many Indian companies rely on overseas businesses for sale and consumption of products and services, he seeks changes to make low-value foreign transactions easier for startups.

“There are strict regulations around import payments, which require CA certification even for a $100 payment,” he says. “Indian startups frequently need to purchase foreign services and products to remain competitive. The government should introduce changes to make low-value foreign transactions easier.”

Inflexor Ventures Managing Partner Jatin Desai says the startup ecosystem has got support from the government by way of the Startup India programme, taxation relaxations, Government e-Marketplace, grants/funding and other schemes.

However, he adds that more can be done through the Budget — “like encouraging entrepreneurship, easing FDI/FEMA (Foreign Exchange Management Act), overall ease of doing business and making startups an integral part of Aatmanirbhar Bharat initiative”.

According to ﻿Black Soil﻿ Capital Co-founder Ankur Bansal, the thrust should be on stability.

“Fiscal budgets are growth-driven, but due to the severe impact of COVID-19 the focus should also be on reinstating stability, alongside growth,” he says. “Tax deductions should be promoted on R&D (research and development) expenses that can make Indian business more competitive and encourage economic recovery. Real estate investments should be encouraged in the affordable housing segment.”

With all fund flows coming under the purview of the Reserve Bank of India (RBI), Ankur says the compliance cost for small investments into startups has increased—a factor that can diminish returns.

“Thus, changes are required to make smaller investments more cost-efficient for foreign investors to boost the volume of funded startups,” he says.

Yagnesh says the current compliance norms are complicated, which can turn foreign investors away.

“Certain relaxations in RBI-related norms can boost FDI inflow into the segment and help create more than 150 unicorns in India by 2025,” he says.

Anup Jain, Managing Partner at Orios Venture Partners, hopes that Budget 2021 will equalise capital gains taxes from listed and unlisted equities to create a level playing field for domestic pools of capital to move towards the startup ecosystem.

"We also expect that direct overseas listing norms will reflect equivalence with those existing for startups listing from anywhere else in the world to bring foreign pools of capital to Indian shores and discourage Indian startups from changing their domiciles. India will jump many rating points on 'ease of doing business' as well as 'self-reliance' if these two can happen," he says.

According to WEH Ventures Founding Partner Deepak Gupta, India lags other countries in the enforcement of contracts that hinders the conduct of business.

“There are many elements to resolving this issue — from accelerated recruitment of judges to improvement of arbitration processes and others," he says. “We hope that action can be taken on this front, with specific pronouncements in the Budget and follow-up thereon.”

This apart, Deepak cites downtimes experienced by websites of government agencies that deal with the public — sometimes during peak filing season — as a hurdle. “An impetus on measuring the user experience and uptime, and targeting improvement could perhaps save time and give us a leg-up in ease of doing business,” he says.

Outliers look for a lift

Even as most businesses took a beating during the pandemic, edtech, fintech, logistics, agritech and cryptocurrency witnessed a boom. Investors are now keeping their fingers crossed for the Budget to make specific announcements that will give these sectors a further push.

Given that expectations are high the government will allocate a bigger share of GDP for education, edtech startups are keen on sops in the Budget, says Yagnesh.

“Funds can also be allocated under the education budget, as a blended learning model will be more effective in solving India’s literacy problem rather than continued spending on physical infrastructure,” he says. “Some official recognition can also be provided to edtech certifications to increase adoption.”

Omnivore's Managing Partner Jinesh Shah says the agritech sector has been instrumental in helping India manage disruptions due to COVID-19 and has received significant support from the government during this trying period.

“Furthermore, farmer-focused direct benefit transfer initiatives have helped build resilience in the rural economy,” he says. “Early-stage enterprises aimed at post-harvest value addition must be incentivised and encouraged, as the development of innovative fresh produce supply chains and a vibrant food processing sector are key to better price realisation for farmers. I believe the Budget will add to the momentum we have seen over the last two quarters, with an increased focus on agri investments and agri digitisation.”

The logistics sector will look to the Budget for measures that can help spruce up its operations through greater adoption of tech. “The space is already getting significantly tech friendly,” says Ankur. “What’s needed is for taxation, payment and documentation to be completely digitised, possibly through a single window.”

This apart, he says investments are required in automation tech such as warehouse sorting and package labelling to increase efficiency and meet the increased ecommerce demand. “There is a need to encourage investment in tech that will improve operational and cost efficiency in the long term and make the Indian logistics industry more competitive globally.”

As trading in cryptocurrencies zoomed last year after the Supreme Court lifted the RBI ban on them in March, crypto venture funds raised billions of dollars. But hazy regulations remain a roadblock.

“There are numerous Indian startups which want to leverage crypto and blockchain,” says Ankur. “However unclear and uncertain regulations around cryptocurrency have impacted their growth. Clear laws are required to enable these startups in bringing investments from these global funds into India.”